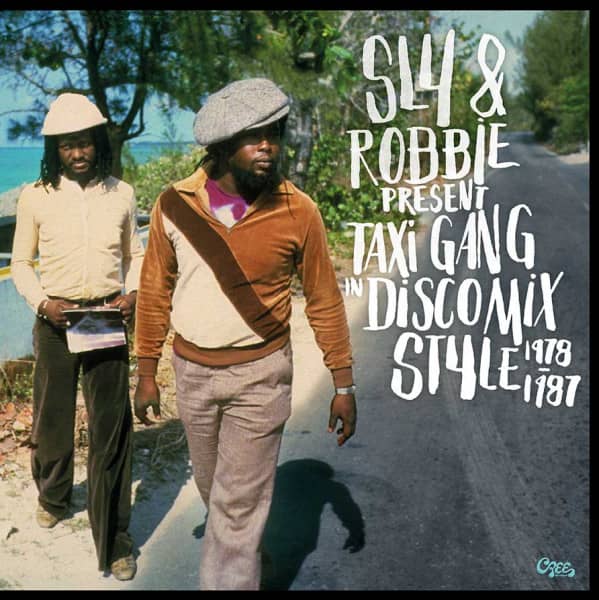 1-CD Digipak (4-sided) with 24-page booklet, 8 tracks. Total playing time c. 58:16
The selections on this compilation demonstrate exactly how much Lowell ‘Sly’ Dunbar & Robert ‘Robbie’ Shakespeare have learned from the roots of reggae, American rhythm & blues and soul, and these versions of contemporary and vintage soul songs show Sly and Robbie at their very best on covers of Little Willie John’s Fever, Al Wilson’s Show & Tell, Tony Joe White’s Rainy Night In Georgia (as covered in soul by Brook Benton), The Delfonics’ Don’t Break Your Promise, The Impressions’ You Must Believe Me, The Spinners’ Could It Be I’m Falling In Love and a brace of Marvin Gaye covers in Sexual Healing and Inner City Blues.  All are sung with panache and feeling by the various vocalists and backed up with superior rhythms, showcased here with full-length versions, from Sly and Robbie. For over forty years they have contributed so much to the body of reggae music that they can truly be seen as its backbone. Without Sly Dunbar & Robbie Shakespeare it is no exaggeration to say that reggae would not have figured anywhere near as prominently as it has done in popular music; long may they continue...

Usually known as simply Sly & Robbie these two master musicians have a variety of names including The Dynamic Duo, The Rhythm Twins and even, on occasion, Drumbar and Basspeare. The role of backing musicians was exactly that... to stay in the background... but Sly & Robbie are the only reggae musicians whose names are internationally known and respected.

These architects and builders of Jamaican music have constantly tested the boundaries of what could, and couldn’t, be used in reggae but despite working extensively with stars of the international firmament including Joan Armatrading, Joe Cocker, Ian Dury, Bob Dylan, Serge Gainsborough, Gwen Guthrie, Herbie Hancock, Mick Jagger and Grace Jones their roots are firmly planted in Kingston’s teeming reggae scene.

Robbie was a student and protégé of Aston ‘Family Man’ Barrett, the legendary bass player for The Hippy Boys, The Upsetters, The Aggrovators, and Bob Marley & The Wailers. They first met in the late sixties when Robbie’s brother, Lloyd, played occasionally with The Hippy Boys. He was given his first guitar, a six string acoustic model, by guitarist Ronnie ‘Bop’ Williams who advised him to take off two strings and to use it as a bass. But Robbie kept all six strings using the two extras for rhythm and his unique style was born. His first recording session was for Sonia Pottinger on Errol Dunkley’s You’ll Never Know in 1972. When 'Family Man' joined Bob Marley’s Wailers Robbie stepped up to become a fully fledged member of Bunny ‘Striker’ Lee’s Aggrovators. 'Family Man' could often not differentiate on playback whether it was Robbie or him playing and Robbie actually played the mesmerising bass line on Concrete Jungle for The Wailers’ breakthrough ‘Catch A Fire’ album.

Sly’s first recording session was for Ansel Collins in 1969 and the rhythm was used by Lee ‘Scratch’ Perry for Night Doctor, an organ instrumental that proved to be a sizeable hit in the UK reggae charts. A further foray into the studio with Ansel Collins provided the rhythm for Winston ‘Techniques’ Riley’s Double Barrel, an early deejay record from Dave Barker credited to Dave & Ansel Collins, which, after dominating the UK reggae charts, rose to the Number One position in the UK National Charts in 1971. He went on to join Skin, Flesh & Bones, a hugely influential session band, whose experiments with mixing and matching roots rock reggae with soul and disco beats presaged much of Sly & Robbie’s subsequent work. Sly moved on to The Revolutionaries, the house band for the Chinese Jamaican Hookim brothers at their legendary Channel One studio, whose innovative approach caused a seismic shift in Jamaican music. With The Mighty Diamonds’ Right Time they single-handedly created the ‘rockers’ era and the record provided a bandwagon which, for the next three years, the entire reggae business would leap aboard. His ‘militant’ double drumming was a huge influence on the Jamaican recording scene and every producer stepped forward with his variation of Sly’s stepping double drum sound. 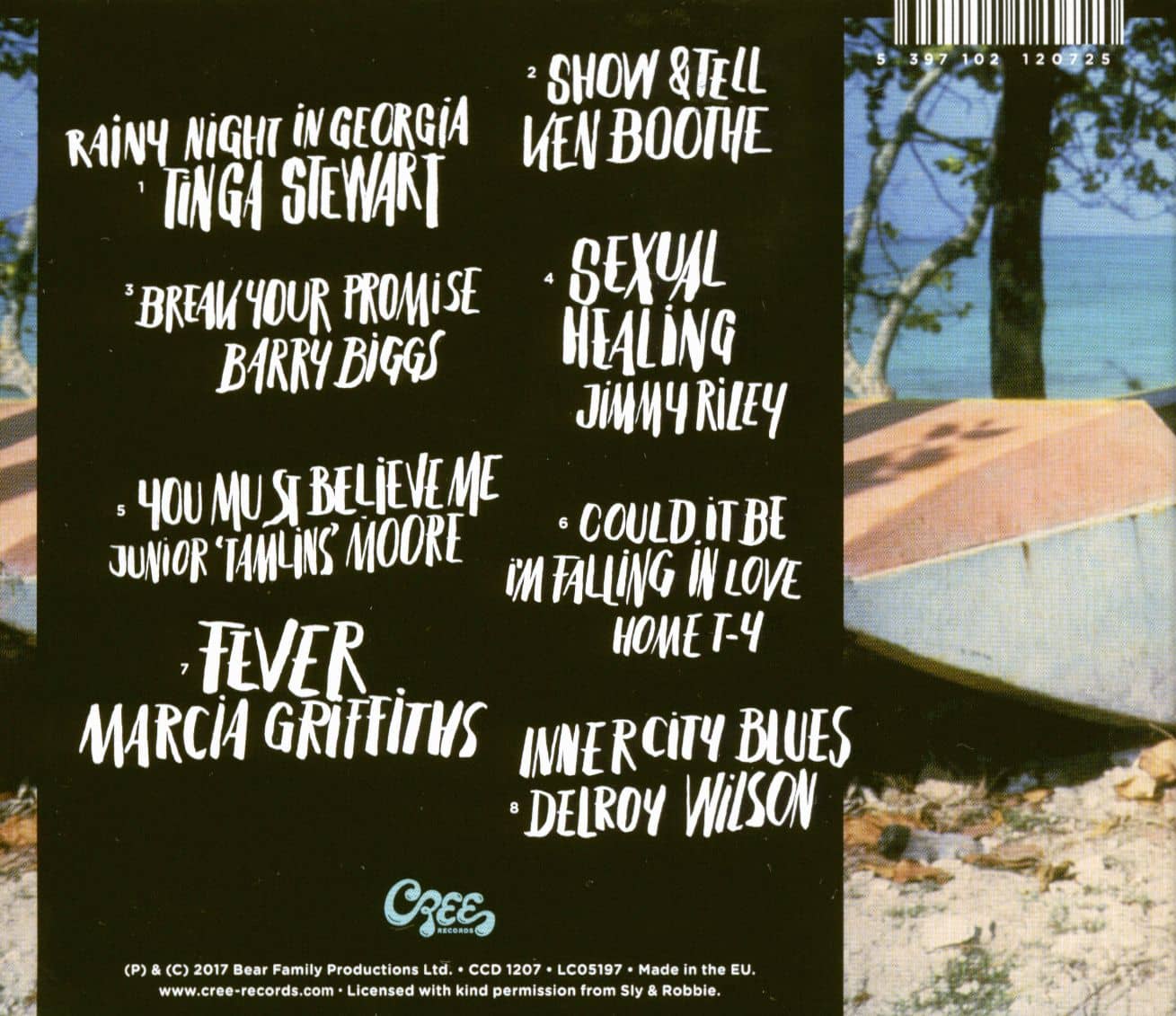 The pair played together for the first time in 1976 on a session for the ubiquitous Bunny ‘Striker’ Lee at Channel One where Robbie soon joined the ranks of The Revolutionaries and the relationship between the Hookims and Sly and Robbie began to foster the long overdue rise of Jamaican musicians as stars in their own right. They continued to work for other producers too but, as the seventies drew to a close, the time was right for Sly & Robbie branch out on their own. Sly and guitarist Bertram ‘Ranchie’ MacLean had originally founded Taxi in 1972 but there were only ever a handful of releases on the label while Robbie’s rare forays into production were released on his Bar Bell label. The first big hit on the rejuvenated Taxi label came in 1978 when Soon Forward by Gregory Isaacs reached Number One in the Jamaican Hit Parade and there was no looking back…

The advent of the digital era in Jamaican music is usually credited to Prince Jammy’s production of Wayne Smith’s Under Me Sleng Teng towards the end of 1984 but Sly & Robbie were experimenting with syndrums and the Simmons electronic drum kit on tracks such as Junior Delgado’s Fort Augustus in 1979 and Guess Who’s Coming To Dinner by Black Uhuru in 1980. Computer technology would play an increasingly important role in Jamaican music as the eighties progressed and the pair was always to be found as far the forefront as was humanly (and digitally) possible without ever compromising their roots. Ever mindful of their musical history their innovations led to the breakthrough of what was then termed ‘ragga’ in 1993 when Tease Me from Chakademus & Pliers, built around The Skatalites’ Ball O Fire from 1965, reached Number Three in the UK National Charts...