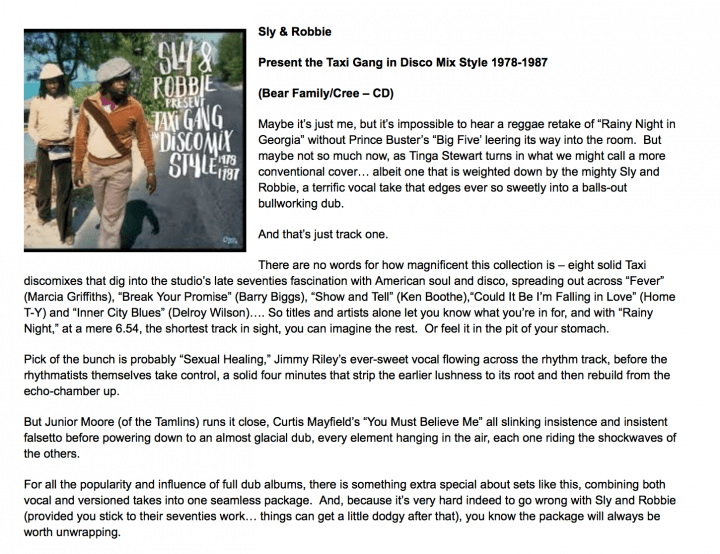 Maybe it’s just me, but it’s impossible to hear a reggae retake of “Rainy Night in Georgia” without Prince Buster’s “Big Five’ leering its way into the room.  But maybe not so much now, as Tinga Stewart turns in what we might call a more conventional cover… albeit one that is weighted down by the mighty Sly and Robbie, a terrific vocal take that edges ever so sweetly into a balls-out bullworking dub.

And that’s just track one.

There are no words for how magnificent this collection is – eight solid Taxi discomixes that dig into the studio’s late seventies fascination with American soul and disco, spreading out across “Fever” (Marcia Griffiths), “Break Your Promise” (Barry Biggs), “Show and Tell” (Ken Boothe),“Could It Be I’m Falling in Love” (Home T-Y) and “Inner City Blues” (Delroy Wilson)…. So titles and artists alone let you know what you’re in for, and with “Rainy Night,” at a mere 6.54, the shortest track in sight, you can imagine the rest.  Or feel it in the pit of your stomach.

Pick of the bunch is probably “Sexual Healing,” Jimmy Riley’s ever-sweet vocal flowing across the rhythm track, before the rhythmatists themselves take control, a solid four minutes that strip the earlier lushness to its root and then rebuild from the echo-chamber up.

But Junior Moore (of the Tamlins) runs it close, Curtis Mayfield’s “You Must Believe Me” all slinking insistence and insistent falsetto before powering down to an almost glacial dub, every element hanging in the air, each one riding the shockwaves of the others.

For all the popularity and influence of full dub albums, there is something extra special about sets like this, combining both vocal and versioned takes into one seamless package.  And, because it’s very hard indeed to go wrong with Sly and Robbie (provided you stick to their seventies work… things can get a little dodgy after that), you know the package will always be worth unwrapping.