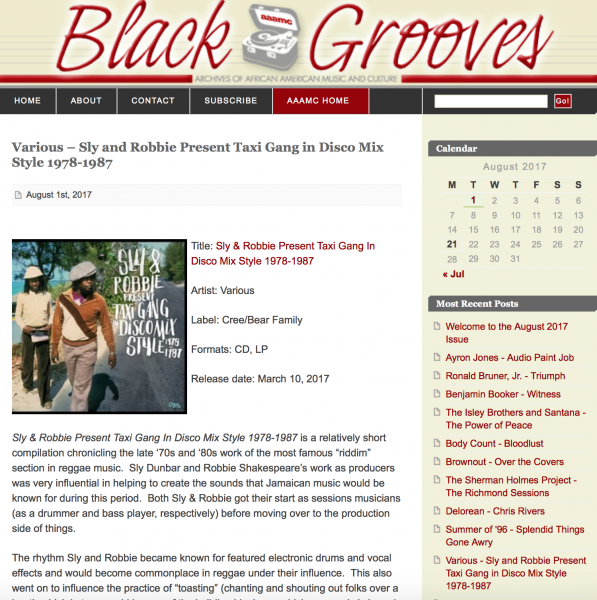 Sly & Robbie Present Taxi Gang In Disco Mix Style 1978-1987 is a relatively short compilation chronicling the late ‘70s and ‘80s work of the most famous “riddim” section in reggae music.  Sly Dunbar and Robbie Shakespeare’s work as producers was very influential in helping to create the sounds that Jamaican music would be known for during this period.  Both Sly & Robbie got their start as sessions musicians (as a drummer and bass player, respectively) before moving over to the production side of things.

The rhythm Sly and Robbie became known for featured electronic drums and vocal effects and would become commonplace in reggae under their influence.  This also went on to influence the practice of “toasting” (chanting and shouting out folks over a beat), which in turn would be one of the building blocks on which rap music is based.

With this disappointingly brief eight track compilation (but still a full 58:16), Cree Records highlights cover versions of American soul and disco hits covered by Jamaican artists, produced by Sly & Robbie. Included are covers of songs made famous by Marvin Gaye, The Spinners, The Impressions and others. Both the CD and LP offer great liner notes by reggae expert Noel Hawks that set the scene for Sly & Robbie coming together and creating their unique production style.

The compilation begins with Tinga Stewart’s cover of Tony Joe White’s “Rainy Night In Georgia” (more famously covered by Brook Benton). With Sly & Robbie’s help, Stewart’s version takes what in Benton’s hands was a melancholy song of lament and turns it into a fun, danceable romp. Despite the bit of cognitive dissonance in the song, it is quite enjoyable nonetheless.

The lone female vocalist (really wish there were more) on the compilation is Marcia Griffiths of the I-Threes (backing vocalists for Bob Marley along with Rita Marley and Judy Mowatt), who covers Little Willie John’s “Fever.” Sly and Robbie’s sonic accompaniment is as sparse as the original, highlighting Griffiths’ vocals (if you enjoy this, definitely check out Griffith’s Play Me Sweet and Nice).

Two Marvin Gaye covers appear here with great results. Let’s be real for a second—nobody’s going to touch Gaye’s vocals on the original version. However, accepting this fact allows you to enjoy these covers for what they are, and both truly highlight Sly and Robbie’s production work.  “Sexual Healing” adds additional rhythm to the original’s yearning groove, creating a vibe that is uniquely Jamaican. “Inner City Blues” crackles with the same urgency as Gaye’s original and sports a great reggae-fying of the bassline.

Overall, the sound quality on the compilation is fantastic as it sounds like all of the selections have been digitally remastered.  Each one is presented in its full length form, including extended jams perfect for dancing and/or “toasting,” creating the vibe of a warm night in a dancehall.  If you are a Sly & Robbie aficionado or you want an introduction to the influential production duo, this compilation communicates why Sly & Robbie have been so influential around the world.