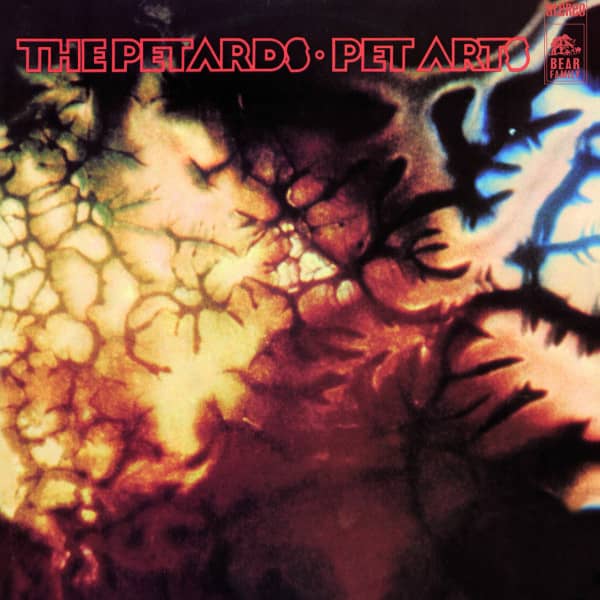 • Reissue of the fourth and last album project by one of the most innovative German bands of the day, the Petards.
• Recorded in the famous Dierks-Studio in Stommeln.
• Double album with strong, extended psychedelic tunes.
• The most experimental album of The Petards, one of the best German rock productions of their time.
• New release in the original cover. Carefully remastered by Marlon Klein from copies of the original tapes for our 180-gram vinyl pressing.
1970 was a busy and exciting year for The Petards consisting of Klaus and Horst Ebert, Roger Waldmann and Arno Dittrich.  With 'Hitshock' they had released a successful album, they had performed in theatres of Bremen and the Ruhr area; they had performed in the legendary 'Olympia' in Paris and had played some 150 concerts.
Want even more statistics?
The band was on the radio in 1970 no less than 800 times, and of course the band was on the top of the relevant annual polls of the music press everywhere!
From November to December 1970 the band was back in the studio to record their fourth album. Their label Liberty had generously given them a double album, four LP sides had to be filled. No problem for the creative Ebert brothers, Klaus and Horst, who once again were responsible for writing all the songs. This time the band wasn't accommodated in Munich's Trixi Studio where the previous albums had been recorded. Instead, they stayed with sound guru Dieter Dierks in the trendy Dierks Studio in Stommeln.
Siggi Loch was not present at the sessions, the band and Klaus Ebert in particular acted as producers themselves. The result was the band's most experimental album, a colorful kaleidoscope with strong psychedelic tracks. The songs got out longer and more unusual, the band didn't care about the radio compatibility of the earlier albums. They had fun and tested what was possible. A great album, which surely belongs to the best what at that time came out of German studios. 'Pet Arts' was released on March 31, 1971.
At this time Klaus Ebert, the brilliant driving force behind the band, had already left the Petards and had moved to Hamburg as a producer for Metronome Records. The band had achieved a tremendous success until then, they had played hundreds of gigs, had recorded great records, but despite all their endeavors they hadn't made the big breakthrough.
Klaus Ebert preferred the comfortable producer's chair to another uncertain career. A violent blow for the band, neither Ray King nor Bernd Wippich, who followed Klaus Ebert, could adequately replace him. Another album which the band recorded under Dieter Dierks at the end of 1971 was not even released by Liberty and was first issued by Bear Family Records in 1981 entitled 'Burning Rainbows'.
In 1972 that was the end, The Petards disbanded. On the 4th of March their 1,000-th performance was celebrated, on the 3rd of September 1972 the last gig of the band was held in the 'Western Saloon' in Wiesbaden.
The Petards were history, unforgotten until today!
Bear Family releases this sought-after double album - back in its original artwork - on 180 gram vinyl for the first time. With 'Pet Arts' we conclude the little vinyl anthology with re-releases of the four original albums by The Petards on Bear Family.