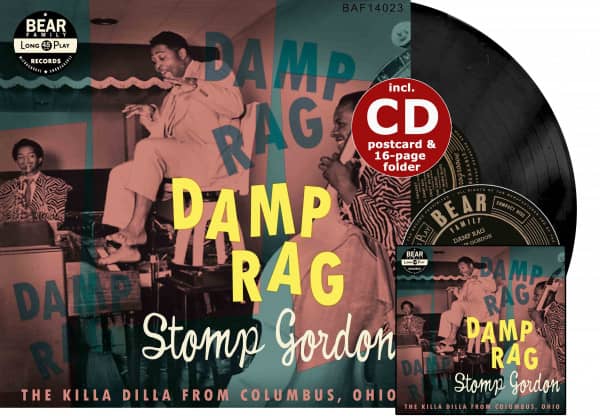 1-LP vinyl (10inch) with 8-page booklet, bonus CD, postcard. 10 tracks (LP), 22 tracks (CD). Total playing time approx. 28 min. (LP), approx. 70 min. (CD).
In four short years, piano-pounding jump blues shouter Stomp Gordon made enough of an impression on record buyers and a Bear Family Records® LP completely dedicated to him was long overdue. Stomp earned his nickname: he pounded the 88s with his bare feet onstage.
The Columbus, Ohio native’s performing attire was as wild as anyone’s this side of Cab Calloway, and his houserocking music reflected that flamboyance. Recording for Decca, Mercury, Chess, and Savoy between 1952 and ’56, Stomp roared his way through Damp Rag, Oooh Yes!, Hide The Bottle, The Grind, and Ride Superman, Ride  with an intensity that presaged rock and roll, often aided by his faithful tenor saxman Little Hiawatha Edmondson.

Stomp should have been a primordial rock and roll star, but his career was cut way short when he was found dead in his parked car on a Harlem thoroughfare, aged only 31. But the man with the magical tootsies packed some serious rocking into a tragically truncated timeframe—and all his great sides are on full display here.