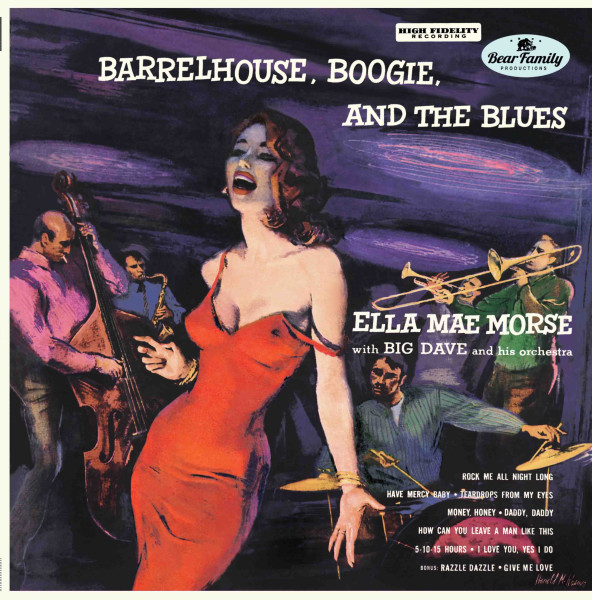 BEAR FAMILY Vinyl Club Exclusive
limited collector's edition, order now from Bear Family's Shop and Mailorder
Ella started her career in 1940 as chirpster for Jimmy Dorsey's Big Band Outfit but was instantly fired, whe the schooladministration stated, she was only 14 years old, not 19. The administration could have avoided some very great recordings, if Ella hadn't tried again in 1942, when she was 17 and was hired by bandleader and pianoace Freddie Slack. 'Cow Cow Boogie' with Slack charted for Capitol Records and started a string of hits, that ended in 1954 with '40 Cups Of Coffee'.

Big Band Swing was completely out for the bobbysoxxers, the 'Big Beat' was the real thing to come next. Capitol had a vision, took its good looking singer with the right voice for RnB and recorded a full album that was issued in 1954 with songs that are RnB-blueprints today, backed by the solid sending arrangements by Big Dave Cavanaugh. The record was issued as a full longplayer, 3 Eps and … an wonderful ten inch records. It was 'Barrelhouse, Boogie and the Blues' with its extraordinary artwork by painter Harold M. Kramer.

During the preparation for this reissue we noted, that nearly every issue of this motiv was completely different in original print quality, colors, hue, saturation and nearly every sleeve was damaged and stained. It was no restoration, it was forensic, as we wanted to do the work from the scrap, not using the illustration from the Bear Family Box. 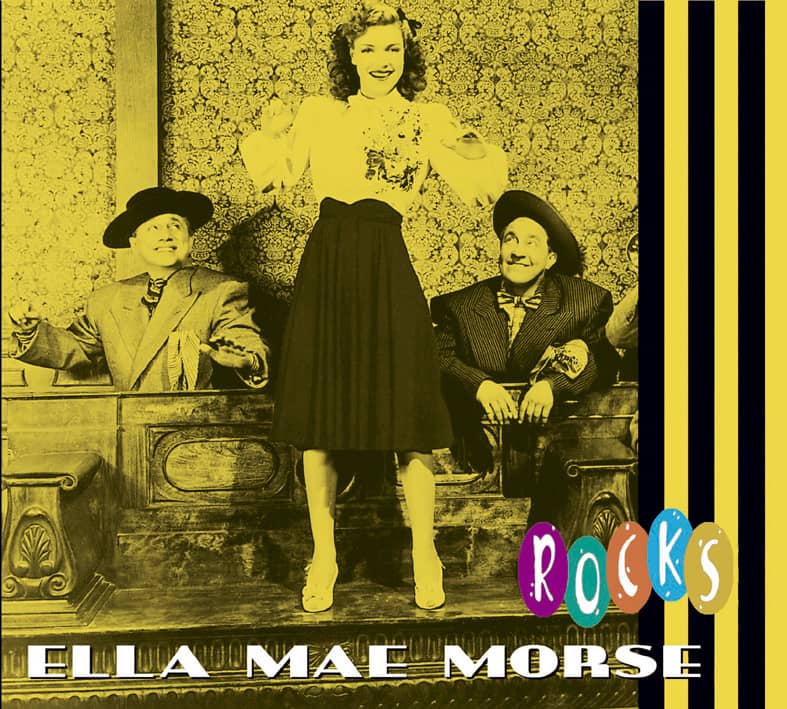 Ella Mae Morse was one of the most exciting vocalists of the 1940s and 50s, a hard-to-classify, Texas-born white singer who knocked everyone out with her hip, black-inflected vocals from the moment she hit the scene as a seventeen-year-old with boogie pianist Freddie Slack's Orchestra in 1942. Her vocal that year on the huge hit Cow Cow Boogie, quickly established her as a name, and dozens of hits followed, both with Slack and under her own name. Sides like the Buzz Me, The House Of Blue Lights, Pig Foot Pete, The Blacksmith Blues remain classics, and The House Of Blue Lights, in particular, has been hailed as one of the seminal recordings in rock and roll history. Uncommonly versatile, Ella Mae could handle anything, from jazz to country, from R&B to lush pop. As she herself has said, "Cliffie Stone said, 'You're a country singer.' And Benny Carter said, 'You're a jazz singer.' T-Bone Walker said, 'You're a rock and roll-blues singer.'"

She was all of the above and then some: an instinctive, insouciant, sexy stylist with an innate feel for the blues that colored and characterized virtually everything she sang. Ella Mae Morse's entire output over her fifteen year tenure with Capitol Records (1942-1957), a label she helped put on the map, is here, including the hits mentioned above and dozens of others - well over a hundred sides on five CDs, including over twenty songs never before released, all beautifully remastered from the original masters. With orchestras and combos led by Billy May, Nelson Riddle, Dave Cavanaugh and others, among the incredible, stellar cast of jazz, blues and country stalwarts accompanying her are, in addition to Freddie Slack: Benny Carter, Barney Kessel, Gerald Wiggins, Pete Johnson, Jimmy Rowles, Red Callender, Al Hendrickson, Jimmy Bryant & Speedy West, Alvin Stoller, and countless others.

After her mentor, the songwriter, singer and co-owner of Capitol Records, Johnny Mercer, told her that a certain song she wanted to record wasn’t "her type" of tune, a frustrated Ella Mae Morse responded with typical pluck. "'What is my type of song?’ Cliffie Stone said, 'You’re a country singer.’ And Benny Carter said, 'You’re a jazz singer.’ T-Bone Walker said, 'You’re a rock and roll, blues black singer -- that’s what you are." They were all right -- and that versatility was both Morse’s greatest asset and her biggest problem.

Ella Mae Morse had an odd career, filled with brief hiatuses to have children and longer breaks to raise them. A star before she was twenty, she was a consistent and popular performer for several decades beyond that, even if she arguably never quite fulfilled the promise of her 1942 breakthrough hit Cow Cow Boogie. Her versatility, coupled with the several stylistic shifts occasioned by, among other things, a four year layoff and changing tastes, often made it difficult for fans and historians to categorize her and for her record label Capitol to market her.

Morse came of age in the Swing Era and her own tastes tended toward blues-tinged swing jazz and torchy ballads, but Cow Cow Boogie aside, she has ironically been less remembered for her early forays in these styles than for her 1950s stabs at R&B, rock 'n' roll and hillbilly boogie. She has generally been ignored in serious jazz studies, dismissed by one critic as a "flyweight."  Fans of early rock 'n' roll and related styles, however, have embraced her. This fact somewhat puzzled the engaging and open Morse, who was game to try anything, but it has been largely responsible for a steady stream of LP and CD reissues over the years. These culminated in Bear Family’s wonderful 5 CD box set, 'Barrelhouse, Boogie & The Blues,' which collected all of Morse’s solo recordings during her tenure with Capitol from 1942-57.

This collection gathers many of Morse’s rocking and most hard-swinging sides, as compiled by the noted music historian Bill Millar. It runs the gamut, from the jivey, swing novelty that made Morse a star, Cow Cow Boogie, to covers of classic early '50s R &B and early rock 'n' roll like Money Honey, Have Mercy Baby and Ain’t That A Shame.  The telling link between these two styles were classic, forward-looking piano and vocal showcases from the early postwar period like The House Of Blue Lights and A Little Further Down The Road A Piece, many of them cut with Freddie Slack, the boogie woogie stylist with whom Morse had originally hit the big time.

Ella Mae Morse was born in Mansfield, Texas, reportedly on September 12, 1924, though Texas birth records list the year as 1923. Her mother Ann, from Clarksville in northeast Texas, was a pianist and vocalist. Her father George was a dance band drummer who had come to the US from England. Her parents split when she was young, but both she and her sister Flo, who became a jazz pianist and vocalist, pursued musical careers. Morse was reared in various Texas towns and cities: Paris, Goose Creek, Houston, Dallas. It was in Paris where the grade school girl first showed a precocious musical talent and, crucially, first exhibited a feel for black blues that would inform her singing to the end. 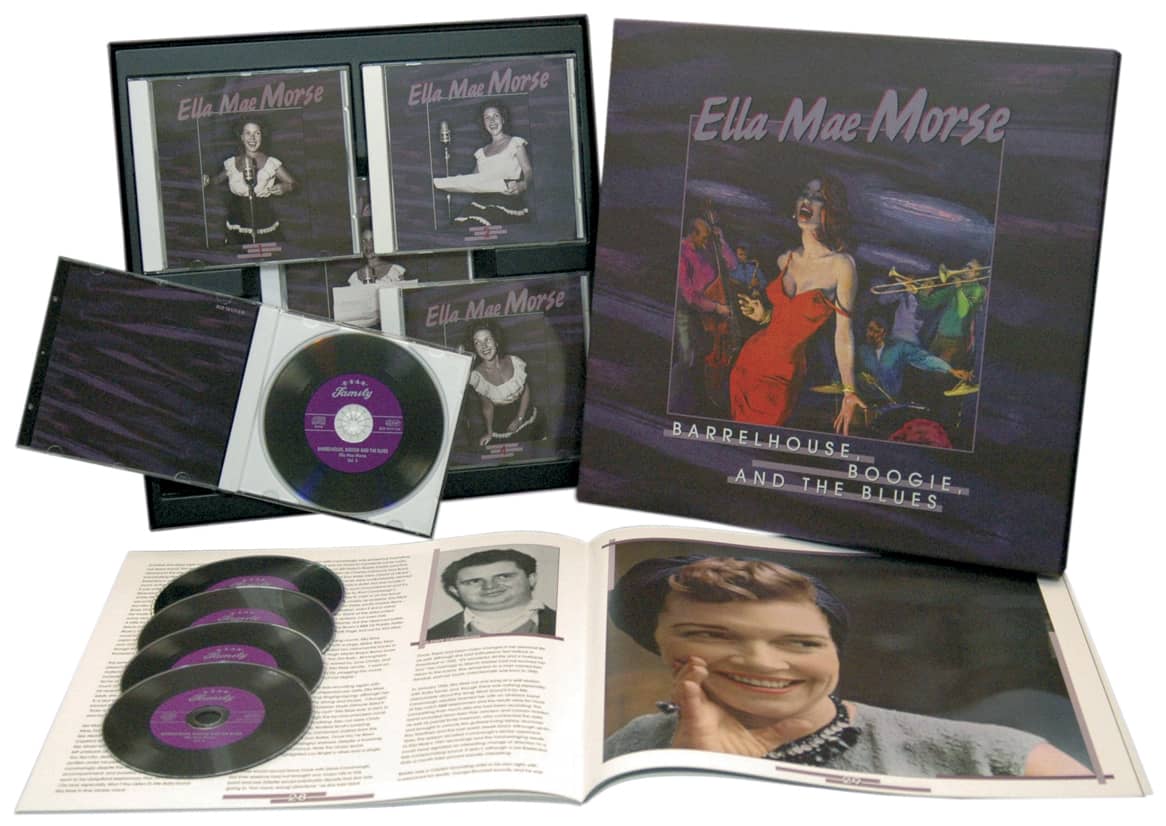 "There was a line that separated the black neighborhood from the white neighborhood, and Antony's grocery store was right on that corner. I used to go there with my mother all the time,"Morse told me in 1997. On one occasion, she heard someone playing blues nearby. "I heard this guitar playing and it just fascinated me. I stood around the corner there and I was singing along with him. And he stopped playing. I thought, 'Oh, dear.'And he came around the corner and he said, 'Sing that for me, child.' It was the beginning of a wonderful friendship."

Morse and 'Uncle Joe' became close, despite segregation and despite some severe racial upheaval in Paris in particular around that time. She had been around music since birth, but she could not explain in later years from where this innate feel for the blues had come. She'd not heard Bessie Smith, for example, and while she may have learned much later from singers like Ella Fitzgerald or Billie Holiday, she could not identify any formative influences. "I had none. A gift from God, that’s all…I think people are just born with something inside them that needs to be heard."

She was, she remembered, about nine when she first encountered the black guitarist she knew as Uncle Joe, but she already sounded and looked much older, something that would be both boon and bane to her early professional career. She made her first radio appearances over Paris' KPLT and was singing regularly -- and often professionally -- by the time she and her mother moved to Dallas in 1936. "I used to audition for everybody -- and it never occurred to me that I wasn't good," she recalled. "My parents said, 'You're wonderful' and I believed them." Quite a few who she sang for were not sympathetic to where she was coming from musically, but Morse was undeterred. She finally got her own 15 minute show at WRR after winning a talent show at a Dallas theatre, where she was backed by local western swing bandleader Roy Newman.

Her relentless auditioning with touring name bands finally paid off when Jimmy Dorsey came to town in late 1938. Admitting her true age at auditions hadn't proven a wise policy to date, so she lied to Dorsey and got the job. She worked with Dorsey for about two months before her real age (fourteen or fifteen, depending on which source is accurate) and lack of experience brought the job to an end. But before she left, she'd become good friends with several band members, including pianist Freddie Slack and drummer Ray McKinley, with both of whom she would later work. 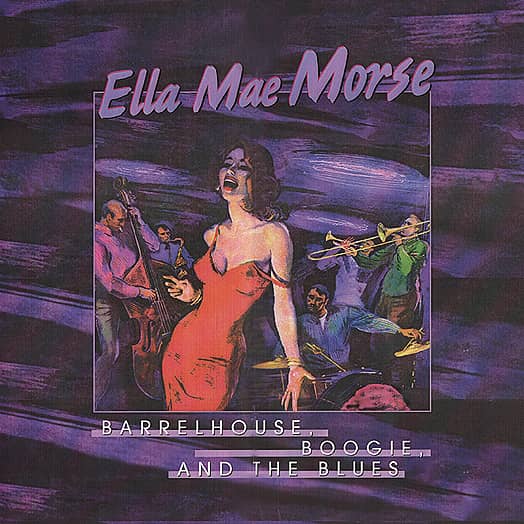 After two brief stabs at New York, Morse moved with her mother to San Diego. Soon she was singing with local bands, eventually catching on with Bud Lovell's group. Still a teenager, she married Lovell's pianist Dick Showalter, a marriage that would last a few years and produce the first of Morse's six children, Richard, in 1943. While working with a combo in a San Diego club in early 1942, she ran into an old pal from the Dorsey days, pianist Freddie Slack. Slack had established himself as one of the premier boogie woogie stylists of the swing era (he could do more and the tag was sometimes a source of frustration) and had recently quit Will Bradley's band to start his own group. The draft, the US entry into World War II and other factors had left him struggling to establish himself, but his hiring of Ella Mae was a major step in the right direction. Not long after she came on board, he became one of the first artists signed to Capitol Records, the new record label formed by songwriter and singer Johnny Mercer with Glenn Wallichs, owner of Wallichs Music City in Hollywood, with front money coming from songwriter and Paramount Studios producer Buddy DeSylva.

Great pressing of a great record

I wasn't sure what to expect form this - usually I steer clear of coloured vinyl as it can be noisier than black, however, I needn't have worried. This disk is a really high quality product with no surface noise at all that I can hear and it provides an excellent showcase for Ella Mae Morse's pre-rock 'n' roll songs. Great record, very well presented. The slightly saucy cover by Harold M Kramer is well printed and a nice bonus to have. 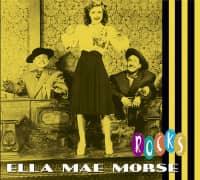 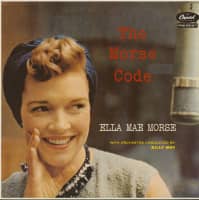 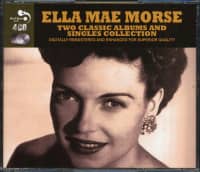