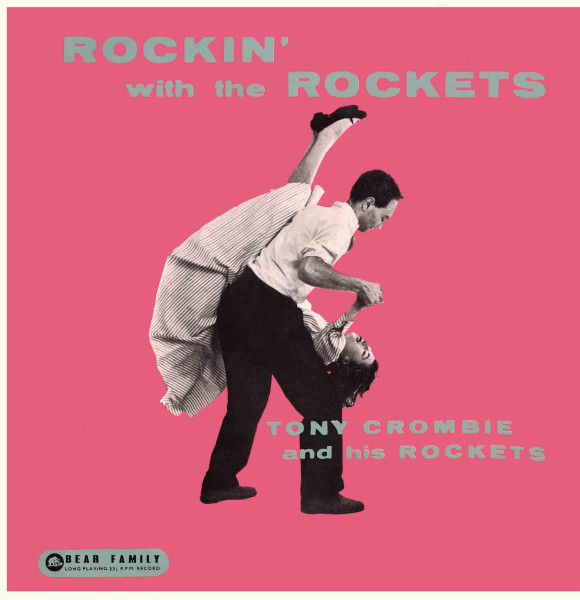 The first British Rock 'n' Roll recordings in our 'Bear Family Vinyl Exclusives' series! Tony Crombie was actually a jazz drummer, but the beat and groove of the ermeging rock 'n' roll music fascinated the artist, and so he switched to rock in 1956 - a short episode that ended shortly after the release of 'Rockin' With The Rockets'. Crombie turned back to jazz.
What remains is an exciting musical legacy, an unjustly unnoticed testimony to the fascination that rock 'n' roll exerted on young Brits - and not quite as young British musicians.
Biography
Tony Crombie was born in London on August 27, 1925.  The multi-instrumentalist (drums and piano) got into jazz during the war years, first playing with colleagues such as Carlo Kramer, Johnny Claes or Tito Burns in various London jazz clubs, before founding his own band in 1947. This combo toured Ireland, among other places. In those days, young people in Britain were enthusiastic about jazz from the USA. Duke Ellington and Ray Nace toured the United Kingdom accompanied by Crombie and bassist Jack Fallon. In the late 1950s, Crombie, Ronnie Scott, Johnny Dankworth, Dennis Rose, Pete Chilver and Laurie Morgen were among the founders of the UK bebop movement, which found a home in the 'Club Eleven'.
In the following years Crombie backed Annie Ross, Lena Horne and Carmen McRae and played in Victor Feldman's band during the mid-fifties. At the same time he conducted his own modern jazz orchestra which also toured internationally.
1956 saw a break in Tony Crombie's musical biography. Enthusiastic about the new rhythms he heard, he turned completely to rock 'n' roll for about two years and founded The Rockets. But as early as 1958 the rocking Rockets turned into a jazz combo. A year later Crombie founded Jazz Inc. and soon thereafter went to Monte Carlo for a year before becoming the drummer in the house band of 'Ronnie Scott's Jazzclub' in 1960. In the following years he had the opportunity to accompany jazz greats such as Ella Fitzgerald, Ben Webster, Jimmy Witherspoon and Coleman Hawkins. And he worked with jazz organists such as Mike Carr, Georgie Fame or Alan Clare.
He celebrated his greatest commercial success with the composition of the film music to the crime series 'The Man from Interpol'. Miles Davis recorded his So Near So Far for his 1963 album To 'Seven Steps To Heaven'.
Tony Crombie died in his native London on October 18, 1999.

The rock'n'roll explosion in the mid-fifties resulted from a musical fusion of black R&B and white country music, both intrinsic American styles. So when early American rock'n'roll artists like Bill Haley, Elvis Presley or Little Richard came on stage, they had a background in one style or another and more than just a fleeting knowledge of the other.

But when this new form of music crossed the Atlantic, British artists were forced to emulate their transatlantic cousins. There was no ethnic heritage in popular music in England; it was the era of big bands and balladeers in the British charts. The only musicians who did not fall into these categories were the jazz musicians who drew their inspiration from their American counterparts.

Tony Crombie was born in the late 1920s in the East End of London, where his mother, a pianist in silent movies, earned him a passion for music. Without formal instruction he could play piano and drums before leaving school, and when he was 16 years old he had managed to join the "Mazurka Club", which heralded the beginning of an excellent musical career. The BBC'Accordion Club' provided him with a long television season with Tito Burns and gave him invaluable experience working with experienced jazz musicians such as Johnny Dankworth.

The roots of jazz were an attraction for Crombie, and a vacation in America when he crossed over with Ronnie Scott enabled him to study the music first hand. Together with Ronnie Scott and Johnny Dankworth he became a founding member of the'Club Eleven' in London, a cooperation with some of the best jazz musicians in England. As Crombie's reputation grew, so did the demand for his services; he played for the Ted Heath Band on their recording sessions when resident drummer Jack Parnell was called up and received the highest award in 1948 to accompany Duke Ellington on his British tour with guitarist Malcolm Mitchell and bassist Jack Fallon.

In 1952 he won the Paris Jazz Festival as a drummer and shortly afterwards joined Ronnie Scott's band for two years before deciding to form his own band. This was followed by a tour to Israel, a pioneering achievement for a British band that was highly praised by the critics but not equated with financial rewards! In 1954 Crombie recorded Jeff Kruger's'Jazz At The Flamingo' series with an all-star rhythm & blues band. Recording for Decca, Crombie's band supports singer Annie Ross on her version of'I Want You To Be My Baby'. They also recorded their own cut numbers such as "Flying Home", "Tiptoe Through The Tulips" and "String Of Pearls". In 1955 the band distinguished themselves at the Paris Jazz Festival. At that time Crombie was a heavyweight in the British jazz scene.

Crombie's interest in jazz had not only led him to explore R&B, but the advent of rock'n'roll had also aroused his interest. In its August 10, 1956 issue, the New Musical Express announced:'New Crombie Band; top dates and staff announced'. The same NME had an ad on their front page for Bill Haley's'Rock Around The Clock'. Crombie was quoted when he said that for several years he had had a great interest in music known as rock'n'roll and wanted to incorporate a visual aspect into the band's presentation (obviously after watching Haley's Comets' performances and noticing the visual impact).

This new line-up was named Tony Crombie & His Rockets and consisted of Crombie himself on drums and piano, accompanied by Rex Morris on tenor sax, Milt Sealey on piano, Jimmy Currie on guitar, Ashley Kozak on bass and Clyde Ray on vocals. The band signed to Columbia and released their first single'Short'nin' Bread Rock', supported by'Teach You To Rock' (DB 3822), which brought them their first and, as it turned out, only chart hit when they reached number 25 in October 1956.

At the same time, they went on a nationwide tour that began in mid-September in Portsmouth and culminated in Sheffield, Birmingham, Nottingham, Liverpool, Glasgow and the Finsbury Park Empire in London. Short'nin' Bread Rock' was an adaptation of the old folk song'Short'nin' Bread'. About 4 years later Paul Chaplain & the Emeralds followed in Crombie's footsteps and recorded a rocking version of'Short'nin'.

As usual perfect work from Bear!

A very rare and hard-to-find 10incher of U.K.'s first Rock 'n' Roller! I wasn't aware that it was also pressed in New zealand!
Great sounds - Cheers to Bear Family and keep up the good work!

AND!! This 10inch is a must have for every collector who digs the Northern Rock 'n' Roll sounds like Bill Haley, Mike Pedicin or Jimmy Cavello!

$17.54 * $11.26 *
Show all "Tony Crombie & The Rockets" articles
Press Archive - Tony Crombie & The Rockets Rockin' With The Rockets - Twoj Blues, Poland
Press Archive - Tony Crombie & The Rockets Rockin' With The Rockets - Twoj Blues, Poland German label Bear Family specializes in restoring the memory of blues and roc-k'n'roll of the 50's and 60's. An additional flavour to these releases is added by the fact that they are also released in a vinyl version, often only in vinyl. That's how we have this album, released in the series "Vinyl Club Exclusives". One would like to write a "black" album, but that's not entirely true, because its colour is ...pink. On the other hand, the music is a mixture of rock'n'roll and hillbilly. Its author is British drummer Tony Crombie and his The Roc-kers. The band was formed in Portsmouth in 1956, but the leader came from London and already had several years of experience playing in jazz bands, including Ronnie Scott. However, after watching several American films showing new sounds born in the USA, called rock'n'roll, he decided to go in this direction.
11.01.2019
Similar products Customers also bought Customers also viewed
Similar products
NEW
Cliff Richard: A Celebration - The Official Story Of 40 Years... Art-Nr.: 0018027 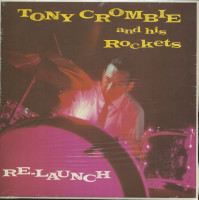