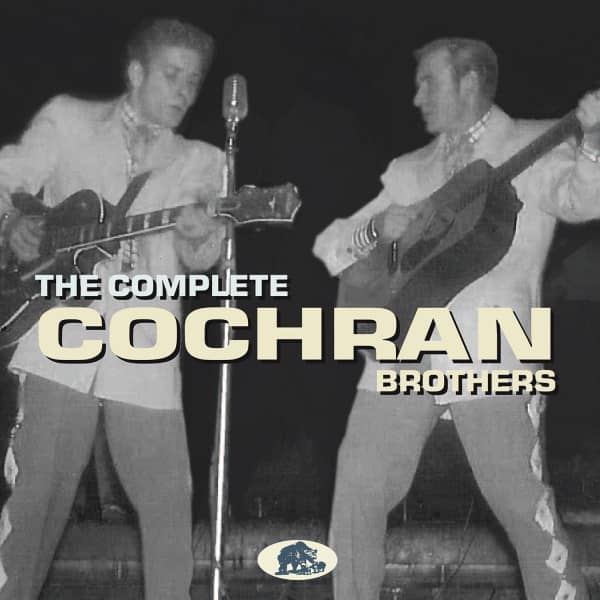 1-CD with 40-page booklet, 30 tracks. Total playing time c. 68 minutes.
• Hank and Eddie aka The Cochran Brothers with their complete duo and solo vocal performances and additionally as studio musicians.
• All the recordings feature both Hank and Eddie in the roll of vocalist and/or musician.
• 30 tracks from a one-year period beginning April 1955 when the Cochran Brothers diverted from hillbilly towards rockabilly music.
• Later, Hank stayed true to country music and Eddie became ‘something else’ musically!
• For completests: featured on this CD are songs which were not included in Bear Family’s 8-CD set ‘Something Else’ BCD15989.
Bear Family Records within this CD allow collectors to have all the recordings on which the Cochran Brothers were involved together on one disc, and their legacy can be absorbed in its entirety. Also the opportunity is available to absorb the diversity and musical dexterity of the two musicians, and hear their contribution and lasting influence upon the music world!  The sessions commenced with string band hillbilly music, and with amplification and ‘Gretch factor’ Eddie through his inventive picking develops a rockabilly rhythm, and with a fuller sound the next step progresses into rock ‘n’ roll. By early 1956 Eddie was becoming a ‘flat get it rocker’, although Hank was happy singing, his skill was song writing (see BCD 17568). The album also features recordings from well-known hillbilly vocalists and those beginning their involvement in the industry with instrumental support from Hank and Eddie.
The album begins with the Cochran Brothers four ‘Ekko’  recordings, which were firmly rooted in country music, however the fourth track ‘Guilty Conscience’ was a joint composition from Hank and Eddie. The importantly of this song being, although it was hillbilly music the tempo was injected with pace, the sound of Cochran Brothers was changing and morphing into a rock beat. The first song to mention ‘rockin’' was recorded in late 1955 at  Bob Cochran’s home ‘Rockin' And Flyin'’  is a duet vocal from the Cochran Brothers but firmly cements rockin’ rhythm into their repertoire!
The  established vocalists featured were Texan hillbillies living and working around the West Coast. They were however losing their musical prominence due to the changing face of the era, when the Cochran Brothers backed them up in the studio, and the recording were also issued on the ‘Ekko’ label. Jess Willard, Riley Crabtree and Al Dexter nonetheless were honky tonk singers par excellence, and offer both honky tonk shuffle tunes and weeping hillbilly laments, which remain true to an earlier era and are steeped in string band tradition.  You can easily hear how close in style some hillbilly music was  to rock ‘n’ roll by comparing Al Dexter’s 1955 (Ekko 1020) re-recording of his most well-known song ‘Pistol Packin’ Mama’, which was covered by Eddies’ friend Gene Vincent in 1960 (giving him a number 15 UK chart hit). The country music exception was vocalist and new boy in the studio West Coast singer/songwriter Don Deal who sang with an early Bakersfield feeling on his fiddle led country shufflers ‘Broken-Hearted Fellow’ and ‘Cryin' In One Eye’. Deal would eventually record in the rock ‘n’ roll style but that is another story.
Hank cut several rocking songs and one of them ‘I’m Ready’ is an outstanding  flat out rocker, with gusto Hank propels the lyric, and by Eddie riding the threats on the instrumental break, the song remained in the tape vaults for decades and is a real rockabilly classic. Eddies’ future manager Jerry Capehart in late 1955 made two sessions for ‘Cash’ label firstly country music, then tuned his tonsils towards the sound that was sweeping the nation, rockabilly hoping to make it big. The  ‘wanna be rocker’ cut the contrived novelty ‘Walkin' Stick Boogie’ and turned up the heat for ‘Rollin'’. Together with Hank and Eddie during a joint session held on April 4, 1956 they placed onto tape several songs. Capehart during his third session hit the groove and began rocking, rolling and hollering about betrayal and a woman who takes his love and leaves him ‘Heart Of a Fool’, a subject most people will know of. Hank and Eddie recorded  two contrasting rocking versions of ‘Latch On’ one version with vocals from Hank and on take two duel vocal with Eddie. When Eddie was in front of the microphone he was; cool, composed, in the groove, singing topical subjects to a rocking beat, ‘Pink Peg Slacks’, was aimed at teenagers and a song which created a still lasting fashion craze.  With his dusky voice Eddie began reminiscing over a former relationship ‘My Love To Remember’ (version 1). From the same session fem. fatal (who we think is) Carol Palmer recorded an unissued torch ballad ‘He’s Graduating’, a familiar theme in the 1950s. Strangely nothing from this session was issued for decades and around one month later a Cochran Brothers session resulted in topical songs with a rocking tempo, ‘Tired And Sleepy’, ‘Fool's Paradise’, ‘Slow Down’, and ‘Open The Door’ and a similar fate was bestowed upon these recordings.
The session discography from Antoon van Olderen with additional information by Russ Wapensky  inform that the sessions were held at locations around Los Angeles and Hollywood and possibly but unconfirmed for Al Dexter either Memphis, Tennessee or Hollywood. The discography shows that the Cochran Brothers were often switching from country to rock beat music in the studio, and from the audio doing this with obvious ease. Bear Family have not followed the discography and carefully programed the running order to enhance your listening pleasure, by combining the genres together.
Mark Armstrong Bühl, Germany, June 2018
Executive Producer: Richard Weise/AND MORE BEARS for Bear Family Productions ♦ Producers: Various ♦ Re-Issue Producer: Antoon van Olderen ♦ Tape Research: Antoon van Olderen ♦ Mastering Christian Zwarg ♦ Biography: Bill Dahl ♦ Discography: Antoon van Olderen with additional information by Russ Wapensky ♦ Photos & Illustrations: Antoon van Olderen, and more bears* Photo Scans & Restoration: Sam Malbuch ♦ Artwork Mychael Gerstenberger • Thanks to Tapio Vaisanen

The music is great as you would expect. As far as I can tell the Al Dexter tracks are re-issued here for the first time, which is a welcome addition. The problem I have with this cd is the sound quality. What is going on here? It reminds me of those dreadful "stereo enhanced mono " lp's from the 1970's. I hope this is not going to become a trend. Thankfully I have a mono button on my amplifier which improved matters considerably.