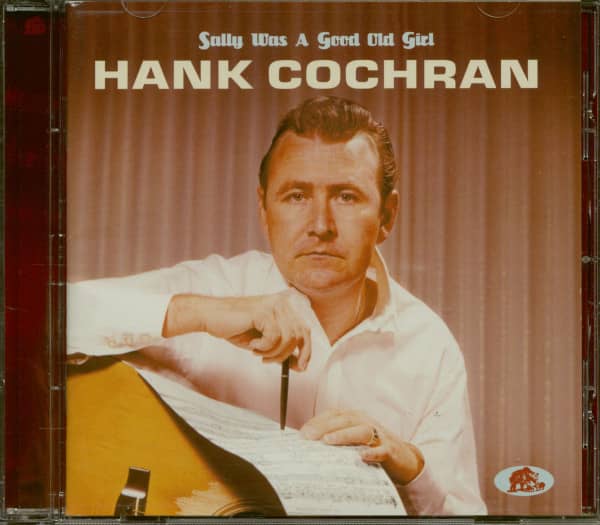 1-CD with 40-page booklet, 33 tracks. Total playing time c. 79 minutes.
• Hank Cochran is a vocalist, guitar picker and as an esteemed songwriter of numerous hit recordings.
• For many Hank will be known as one-half of the Cochran Brothers along with Eddie Cochran.
• He may be better known from the hit recordings he has created, rather than a  recording artist.
• 33 recordings, Hank’s versions of the hits he wrote, songs he covered, both country music and country rockers!
• Also featured are his own recordings of eventually million sellers he penned and other artists made into hits.
• This CD album is also a perfect companion to the Cochran Brothers BCD17565.
Bear Family explore the legacy of Hank Cochran who was always in heart a country artist and after his association with Eddie Cochran ended, returned to his real love country music. Conversely some recordings retained a rockabilly-ish feel and  teen beat tempos were also recorded. From his first solo demo session held sometime during 1957, at the Gold Star Recording Studios (where many rock ‘n’ roll recording sessions were held) Hank recorded four songs. ‘Half Of The Time’, ‘Everyone's Laughing’ (both one version) and perhaps better known by Glen Glenn, the mid-tempo rocker ‘Goofin' Around’ (three versions, take 2 and 3 are used) and finally ‘Left Out’ a melodic teen rocker (three versions, take 2 and 3 are used). A vocal technic and style similarity to that of Wynn Stewart should be gained from hearing the first two recordings, and on many of the other shuffle tempo recordings.
Hank returned to ‘ Goofin’ Around’ during a  1958 two song session issued on ‘Dore 508’, here the song is re-worked with saxophone and thrashing drums as a flip to country weeper ‘Don't Apologize’. Harlan Howard another respected country writer penned two teen/country rockers, which were perfect for Hanks melodic voice which fits to the songs like a glove to the hand. From a November 7, 1961 session ‘Has Anybody Seen Me Lately’, and from February 1, 1962 session the often-covered ‘Sally Was A Good Ole Girl’. From Antoon van Olderen discography, the sessions were held in music city USA, Nashville Tennessee! Therefore the inclusion of a song again from the pen of Harlan Howard paying tribute to one of the city’s most famous drinking joints ‘Tootsie's Orchid Lounge’ is more than fitting, and finds Hank more forceful vocally during this drinking ditty.
The main aspect of this album is melodic country music made for people to relax and chill out to, and the majority of the songs feature sweet Nashville style arrangements; harmonious vocal chorus, piano and numerous famous session musicians. Most certainly, Patsy Cline benefited from Hank’s compositions ‘He's Got You’ (with a change to She’s Got You, English songbird Alma Cogan also covered this) and ‘You're Stronger Than Me’ (co-wrote with Jimmy Key) and the hits almost clone Hanks version. Burl Ives, Wanda Jackson, Bing Crosby to name but a few have recorded Hanks ‘A Little Bitty Tear’ and here we can enjoy Hanks melodious version. From the pen of Bob Forsee ‘A Good Country Song’ finds Hank in a relaxed mood on a song which is clearly derived from ‘It Wasn’t God Who Made Honky Tonk Angels’. The novelty of war songs and heroes was still riding high in the charts during 1962 and Rodger Miller offered Hank a song fitting the genre ‘Private John Q’. Most certainly, this album offers a variety of music styles and although country music is the main ingredient, unquestionably there is some cross over material that should interest rockers. For a man who himself only managed three country Billboard positions, this legacy questions his lowly placings in the music charts.
Mark Armstrong Bühl, Germany, June 2018
Executive Producer: Richard Weize/AND MORE BEARS for Bear Family Productions ♦ Producers: Various ♦ Re-Issue Producers: Antoon van Olderen, Richard Wein ♦ Tape Research: Antoon van Olderen, Richard Weize ♦ Mastering: Christian Zwarg ♦ Biography: Bill Dahl ♦ Discography: Antoon van Olderen with additional information by Richard Weize ♦ Photos & Illustrations: Antoon van Olderen, and more bears ♦ Photo Scans & Restoration: Sam Malbuch ♦ Artwork: Mychael Gerstenberger • Thanks to Tapio Vaisanen This compilation: 0 & C) 2018 Bear Family Productions Ltd. BCD17568