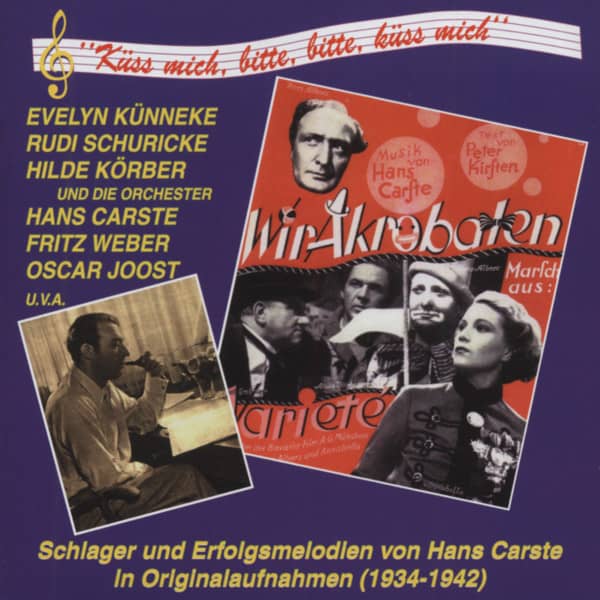 Light music can not be taken seriously enough. According to this motto, the composer Hans Carste invented his many successful melodies, and as an arranger he used to say: 'You can not save on strings'. This musical philosophy can still be felt today when listening to Hans Carst's compositions on the radio or on recordings. Hans Carste, the master of elegant and sophisticated entertainment music, was born on 5 September 1909 in Frankenthal in the Rheinpfalz.

His youth was tough and, unlike that of many colleagues, he was adventurous and deprived. The fact that later on he was to become a successful composer was not foreseeable at first. Without a father, he grew up as an only child with his mother and later with relatives in Austria, in the Wachau. At the express wish of his mother, Hans Carste studies political science at the University of Vienna. When he realizes that the world of records and paragraphs, however, would never become his world, he leaves the university. The 'Electrola' magazine 'Skizzen' of November 1938 describes Hans Carst's way to music as follows: 'But Hans Carste would not be
true artist, had he not thrown his studies after a year, changed it by himself into that of music.

The fact that he was born in the sunny Palatinate and raised in Austria soon came to him very well for his compositions. The penchant for melancholy, which the privation-rich study brought with it on its own, mixed with the cheerful influences of the music-loving country, gave Hans Carste the prerequisites for a good music creator from the very beginning. The led straight from Vienna via Wroclaw to Berlin. And here begins the actual film strip to run, which leaves nothing to be desired in tragic comedy. ' In Berlin, Hans Carste has to penetrate as a pianist in night bars. Often he only plays for a plate of hot soup.

By chance, the popular conductor Ludwig Rüth discovers him, who finally brings him as a pianist in his orchestra. Ludwig Rüth, who calls himself 'Lewis Ruth' before 1933, also records the first compositions by Hans Carste on records. Slowly the way begins. In 1933 he receives the order for a first film music. 'Novel of a night' ...