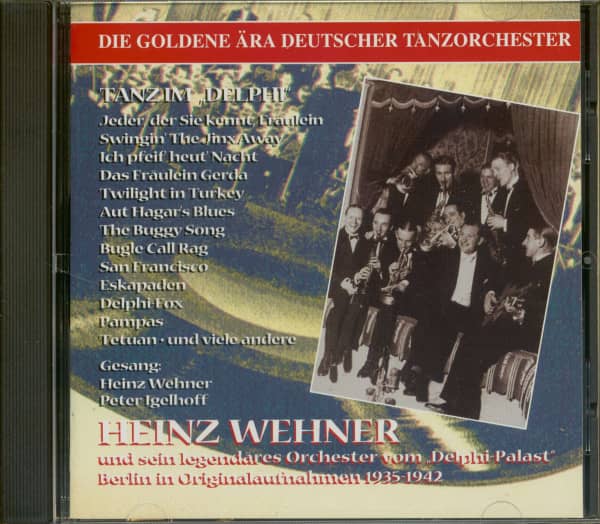 Heinz Werner and his orchestra from the Delphi Palace, Berlin 1935-42
Original photographs from 1935 to 1942

Heinz Wehner was born on May 21, 1908 in the small town of Einsal in Westphalia. From the beginning it must have attracted him to the music. He studies violin, and as early as the mid-twenties, he has his own modest chapel, with which he taunted. For the ambitious musician the way to Berlin is predetermined, because only there it was possible to play out of the gray mass of traveling dance musicians, so to speak, in the first row. In 1934 it's finally time.

With his own orchestra consisting of ten musicians, Heinz Wehner gives his first guest performance in the Reich capital, in the Europa Pavilion in Königgrätzer Straße. Here the orchestra was to return again and again until its dissolution. Musical headquarters, however, is another, no less popular establishment: the 'DelphiPalast' in Kantstraße. The closeness of the bandleader's relationship to this house is evidenced by the fact that he marries the owner of the 'Delphi' at the beginning of the war. 11 In the thirties, Wehner is one of those who are popular because of their enormous popularity to take out a few freedoms regarding their 'hot' style of play.

In a time when swing dancing is not welcomed and even sanctions of the Reichsmusikkammer against musicians are introduced, who confess in public to the Anglo-American swing, Wehner can risk until the year 1937 the name 'TelefunkenSwingOrchester' on the labels of his records respectively. How swing enthusiast Heinz Wehner was you can already see that he always recited the English refrains of American swing and hot numbers on stage and on records, although his pronunciation was anything but good ...