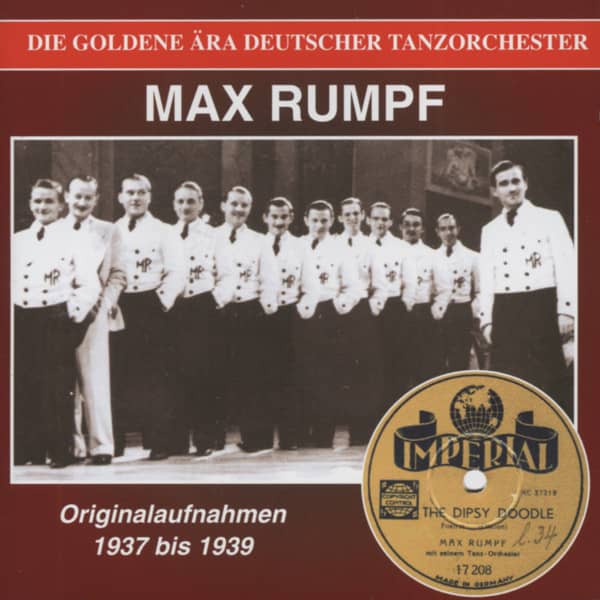 About 18 years ago, more specifically in the spring of 1988, the author of this little article came into contact with the name 'Max Rumpf' for the first time. It was the fifth edition of the now cult-cult magazine 'FOX AUF 78' by Dietramszell near Munich doctor, shellac record collector and 'hobby publisher' Klaus Krüger, in which there was an article about the orchestra conductor. The author was the now deceased legendary discographer, jazz and swing researcher Horst H. Lange, who as a contemporary witness Rumpf still heard personally and was later even friends with him.

What appeared to read seemed unbelievable: at the end of 1937 the English music magazine 'MELODY MAKER' named it the best swing band from Berlin, compared to the legendary CasaLomaOrchester they were set up and otherwise not saved with superlatives. And then the obligatory discography at the end of the article: Entire 14 plates 28 tracks, recorded between July 1937 and May 1939! An orchestra of this prominence and then only so few titles, where other bands could produce double or even triple titles over the same period? The explanation is given by Lange in his biographical sketch about Max Rumpf: 'It must be reported here that Max Rumpf was not very happy with the conditions of the defective crystal recording studio. He felt that his recordings were suffering and rarely accepted the dates offered to him.

Therefore, the RumpfOrchester recorded only a few titles until the beginning of the war. It could have been over 160 titles until then, a regrettable fact ... 'Really can not imagine what else would have been handed down by the orchestra Max Rumpf under other circumstances. The selection of the titles produced would have given rise to the most beautiful hopes. Of the 28 recorded recordings, a dozen standard (but in part beautifully swinging) German daily hits are dedicated, but the remaining 16 recordings are for the most part pronounced swing classics and of a caliber to which German orchestras do not or only rarely and if so, then certainly not on commercial records have dared.

There are the Duke Ellington tracks 'Caravan' and 'Azure' alongside 'The Dipsy Doodle' by Larry Clinton, two tracks with perfect English refraining (Boston Tea Party & swing high, swing low) alongside a fabulous recording by Sid Philips '' Hick Stomp 'from May 1939. In addition, there are a number of interesting compositions by Max Rumpf arranger Alexander Grammatikoff, who need not shy away from comparison with their international role models.