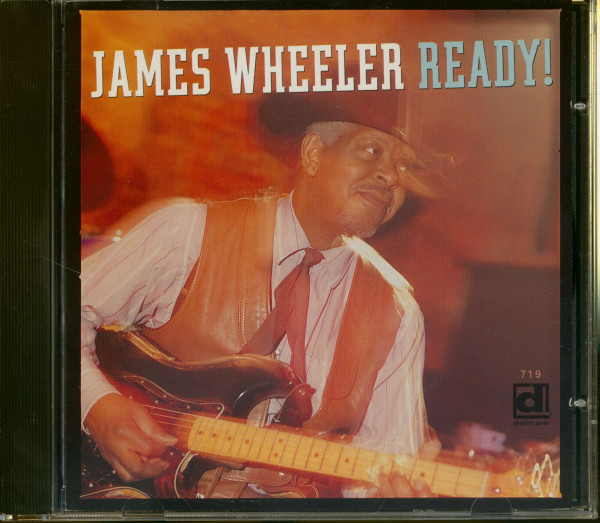 (1997 'Delmark') (66:54/13) born in '37 this is Wheeler's first solo record. Long-time member of both, Otis Rush's band and Mississippi Heat, he now steps out on his own. His vocals sound rather shy, but his playing is sensible and fiery at the same time, sometimes reminding me of B.B. King . A fine, rather reserved album. JAMES WHEELER - gtr/voc, BILLY FLYNN - gtr, KEN SAYDAK - pno, BOB STROGER - bass, VERNON RODGERS - drums.

JAMES WHEELER is a quiet man. One of those types who has been putting in decades of work backing other musicians while shying away from the spotlight himself. After forty plus years James Wheeler is finally ready.

James Wheeler was born in Albany, Georgia on August 28, 1937. Wheeler didn't follow the usual path of listening to the blues and picking up a guitar as a youngster. His favorite music as a youth was the big band sounds popular in the day. Folks like Joe Stafford, Glenn Miller and Duke Ellington. 'I like to tell people that I came in at the college level and down to the starters level. That was the sound that I had to listen to. Louis Jordan was my main man. He was my idol for a long time.' Wheeler never even played an instrument until he moved to Chicago in 1956.

Nineteen and ready for a change in life, James Wheeler headed north to join his older brother Golden Wheeler in Chicago. Golden had come to Chicago a decade earlier and got caught up in the sounds of the city. He was fascinated with the sound of the harmonica and after Little Waiter befriended him he began to learn to play. As soon as little brother James arrived in Chicago he was thrust into the sounds of the blues. Golden was playing with Waiter Smith, Donald Griffin and Johnny Swan at the time, and occasionally jamming with Eddie King and harp player Willie Black. James began to thump around on the guitar when hanging out with the gang, and eventually picked up an old Harmony acoustic guitar with a pick-up in it. James began to see bluesmen like Howlin' Wolf and Freddie King playing in the clubs, and his interest peaked. By the early 1960s Wheeler was jamming regularly on the West Side and landed a steady gig with Billy Boy Arnold at the Club Arden.

In 1963 Wheeler decided to form his own band. The Jaguars consisted of Wheeler on guitar, bass player/vocalist Johnny Howard and drummer Sam Burden. The band cut their teeth at the King James Club on 111th St., but their first big break came when they filled in for Syl Johnson at the Just Me Lounge at 59th and Morgan.

This gig opened the doors to various house band stints including stays at the Bonanza, Just Me Lounge, Payton Place and the Burning Spear. During the next ten years, Wheeler played behind blues greats like McKinley Mitchell, B.B. King, Millie Jackson, Otis Clay and O.V. Wright.

After The Jaguars broke up in 1972, Wheeler was enlisted to form Otis Clay's touring band, the OCB's. He stayed with Clay for the next three years and in 1975 went on tour with the Impressions. For the next decade Wheeler held a day job and only played on the weekends with guitarist Buddy Scott. Wheeler's next break came in 1986. 'One evening when I got home my brother called and said some people had been trying to find me. I asked who it was and he said Otis Rush. So I got in touch with him and he said: `Look I've got to go into the (Kingston) Mines this weekend and need a guitar player.' So I said `O.K. Just for that weekend,' you know. Little did I know it would last for 7 years.' It was Rush that encouraged Wheeler to start singing and made a spot for him singing in his show. Wheeler left Rush in 1993 to join the band Mississippi Heat and made three records with them. Lately, Wheeler has done a stint with Magic Slim and currently works in Willie Kent's band.

Ready! finds Wheeler out front and on his own for the first time. With a little help from a few old friends. Wheeler shows his mastery of a variety of blues styles. After forty years as a sideman it's about damn time James Wheeler stepped out front. One thing's for sure, he's ready.

[Quotes from an interview with James Wheeler on February 7, 1998.]

On can't take it James Wheeler emerges as a comfortable alternative to the over-excited, high glitz of modern day blues. Wheeler offers up music that is pleasurable listening in a variety of ways. His clean musicianship is a bright back drop for his lyrical skills, his arrangements are fun with surprising changes and the CD's ability to be both danceable and easy listening is a major accomplishment. You get everything from stick it out, stomp it down boogies to bump and grind, booty squeezin' slow drags. Wheeler is a master storyteller; his tales are full and complete, revealing consequences and results. Most start off as familiar themes that quickly run into intriguing plot twists which show us the reality of love and life with a generous dose of humor.

"I've been writing since '75", Wheeler states. Most of the songs I write have a comedy feel to it. I make a little story line then you can look at it and see the picture. I go from the beginning, to the middle, to the end. I set it up so you can tell the rest of the story. On a lot of them I be crackin' up myself, but there's a little bit of truth in all of it." "Where Did You Stay Last Night?" has Wheeler's milk choco-late voice wrapped around the smooth butter of Sorin's harp. The porch sittin' solos, midway into the tune, have you closing your eyes, feeling a warm summer breeze. Dress tails are swishing and conks are smoothed back as Wheeler rolls into an easy romp on "This Can't Be Happening To Me", a sweaty, juke joint, Ms. Seeley type blues. Wheeler's knowledge of his guitar comes to the fore on "These Hard Hard Times" where he lays out a soul blues social statement.

The guitar and piano skitter and leap around effortlessly, becoming a musi-cal adagio. Wheeler's stinging, fluttering riffs give the song the dark urgency its lyrics suggest and Sorin's moaning harp adds despair. Flynn's subtle, whining slide on "Who Loves You Baby?" is sweet and tasteful amidst a full out shuffle. Saydak's piano prowess is like a hard rain after a drought in the ballad "Sometimes". Stroger infinitely proves himself solid as he creates a well structured pocket, traversing smooth lump shuffles and walking bass lines as Binder firmly holds the musical tower in place. "We just got in there and did it.

What you have to do is listen to what each person is doing. Everybody has to find a spot. It's like when you're cooking. You can't have your stuff on and don't have all the ingredients. So you have to put all these parts together and that's what I do." Can't Take It is quite literally bits and pieces of life gone awry. .... 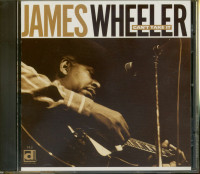