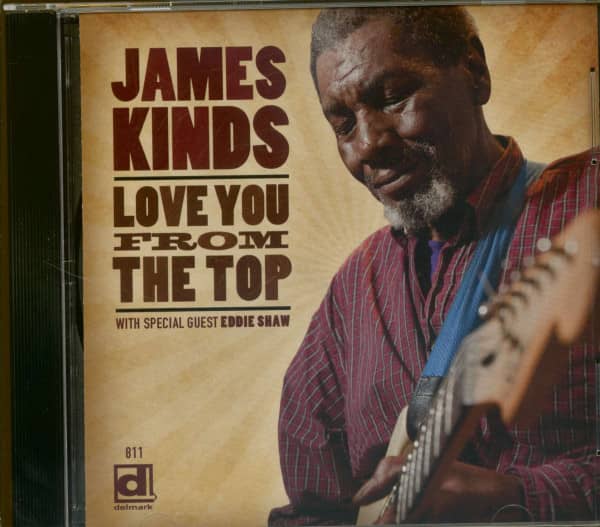 James Kinds: Love You From The Top (CD)

In 1977 he toured Europe a part of Lippmann+Rau's in-demand 'The New Generation of Chicago Blues' package. While his co-stars Billy Branch and Lurrie could maintain their high profile, James couldn't. He was popular on the Westside circuit, but remained virtually unknown outside the ghetto. Finally, he moved to Iowa in 1993 where he got inducted into Iowa's 'Blues Hall of Fame'. His Delmark album is a fine example for contemporary soul-inspired blues from the westside, presenting the smooth gospel-drenched vocals style and the elegant guitar playing of James Kinds. A good one.JAMES KINDS - voc/gtr, AL POOL - gtr, ANTHONY DOTSON - bass, CLAUDE L. THOMAS - drums. Special guest: EDDIE SHAW - ten (3 tracks).

Article properties: James Kinds: Love You From The Top (CD)

Blessed with a stirring, gospel-enriched vocal de-livery. he toured Germany that year with a package assembled by Jim and Amy O'Neal that arrived bold-ly billed as "The New Generation of Chicago Blues:' A Living Blues feature confidently declared, "The best new voice in Chicago may well belong to James Kinds: But unlike his co-stars Billy Branch, Lurrie Bell, and Johnny B. Moore, maintaining that high pro-file proved difficult for the singer, except on the West Side blues circuit that had long nurtured "the Kind Man's" dynamic, soul-tinged act. That would change after the singer relocated to Dubuque in 1993. James made such a name for himself in his new surroundings that he was a 2008 Iowa Blues Hall of Fame inductee.

Yet he's never had a nationally distributed album properly spotlighting those golden pipes until this one. Love You From The Top, cut at Delmark's in-house studios, is sure to open a lot of eyes as to what Kinds can do vocally. "I really was wanting to be on the Delmark label:' says James. Eddie Shaw's lusty tenor sax adds to the steamy West Side ambiance on several tracks, just as he did on Magic Sam's classic Delmark album Black Magic more than four decades ago. "Eddie goes way back for me:' says Kinds. "He was one of my mentors:' The prolific Kinds displays a predilection for using ladies' names as song titles ("Peggy Sue," "Katie," "Johnny Mae"), while the set's hard-driving title track stems from personal romantic experience. it was a friend of mine that I was singing about:' he confides.

"Basically. all my music is something like that, about somebody that lost a love and is looking for one A churning R&B groove powers "I Got A Woman," and Kinds does some intense testifying on the slow-grind-ing soul ballad "Take A Look At Yourself:' Drew, Mississippi is a long way from Chicago's West Side. Born April 23, 1943, James grew up there on a plantation situated on Blue Lake, eight miles outside Tutwiler. Singing in the Mount Olive Baptist Church choir gave him his first musical experience. yet he soaked up as much blues as possible within the confines of his religious home. "I got in trouble more than once about the blues:' James says. "You know how women are. They was really off into spiritu-al stuff. and they would catch me playing the blues.

But I'd go right around the house and go right back!" He ordered his first guitar from a Sears, Roebuck cat-alog and taught himself how to play it. Kinds formed a gospel quartet, the Spirit of Joy. when he was only 13. "We were some green boys, but we had that sound together:' he says. They never re-corded but did perform on Clarksdale's WROX radio, championed by deejay Early Wright "The Man With the Mouth All Over His Face: they called him!" laughs James. who had to turn down an offer a year later to join the famous Spirit of Memphis when his mother forbade him to go. "It did good until all of us got grown and started moving away to Chicago and Detroit, St. Louis: he says of the quartet. "And I was without a group. About a year later, I moved to Chicago." That was in 1959. The 16-year-old arrived in the Windy City with clear-cut goals."To go out on my own music, and to get somewhere where I could make me some money. I wasn't making no money in the South:' he says. "I got to Chicago and got me a job. and that was alright." At first he gravitat-ed back to the church, joining the Soul Seekers. "I sung a little gos-pel in Chicago. but I wasn't obli-gated to no group:' he says.

In the end. however. the blues won out. Sitting in at drummer Kansas City Red's joint on West Lake Street started the ball rolling. "I heard about blues being there by word of mouth, and just went:' remembers James. "I picked one of the coldest nights in Chicago to go. And didn't nobody show up for the gig, nobody but the musicians. So we were sitting around the heater there, and they started doing songs. Red asked me, he said, 'Anybody in here know "Laundromat Blues"?' I said, 'I know it!' And he said, 'All right, let me hear you sing it!' I did, and he said, 'Well, bring your gui-tar Friday. You got a gig!" Kinds would become a regular at Walton's Corner and the 1815 Club on West Roosevelt Road. James was a charter member when bassist Purvis Scott formed the Oasis in 1967. "I was working at Walton's Corner, and one of the guys, the bass man in there, he was part owner at the time:' he says. "We just all got together, just started to playing together, doing different shows.

He named the band the Oasis: "Ada: Kinds' 1977 debut 45, was cut with Oasis at Ed Cody's studio on South Michigan Avenue and came out on the tiny Cloud-9 label, which James had a piece of. It endures as James' showstopping finale: he often roams through his audience while belting its impassioned lyrics. "To tell you the truth, 'Ada' kept me above board for years:' he says. "Everybody wanted to hear Ada: I was singing it from my heart" Not long after the release of "Ada:' Kinds split for Los Angeles to work with Ike Turner at his Bolic Sound studios. The connection didn't work out too well. "He wanted money, and he wanted results;' James says. "He'd give you a whole day to do something, as long as when that day was over with, you've got ir The 1993 move to Dubuque changed every-thing for Kinds.

"I came out here to bring my daughter to school:' he says. "I liked the quietness of this town. I said, 'Well, I'll stay here and write some blues.- Eventually hooking up with a young trio, the All-Night Riders, James made three CDs for his own Full Clip label: 2004's Dirty Old Man (Down To Earth), the next year's The Blues Come Home, and Don't Get It Twisted in '07. James and the Riders went their separate ways in 2008. Now he's ready to embark on the next chapter of his career, encour-aged greatly by the release of this CD. "I see it doing good things for me:' says James. "I believe it's gonna take me places that I've been wanting to be at:' —BILL DAHL