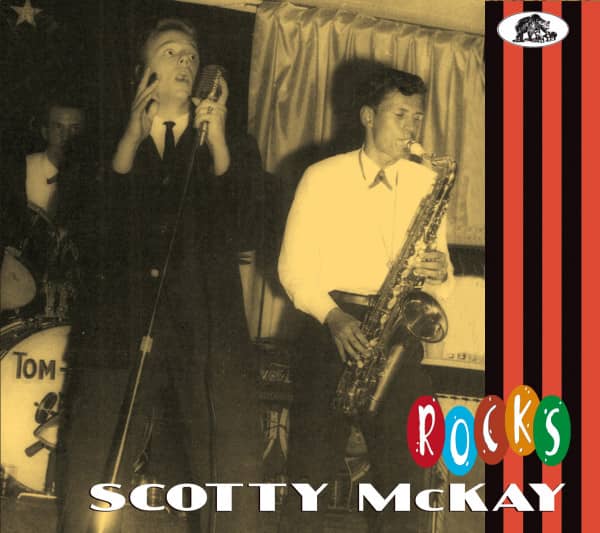 1-CD with 24-page booklet, 32 tracks. Total playing time about 79 minutes.
Maybe Scotty McKay will never appear in the list of the '100 best musicians of all times'. As a pianist and guitarist he left only a few traces in the history of Rock 'n' Roll - even though he was a member of Gene Vincent's Blue Caps for a while around 1957 and appeared on the 'Ed Sullivan Show' on November 17th 1957. He also sang background vocals and played piano and rhythm guitar on Baby Blue and can be heard on the LP album 'Gene Vincent Rocks & The Blue Caps Roll'.
As a convincing genuine rocker and strong lead singer, however, Scotty McKay belongs to that group of authentic masters of the genre who deserved to make it big, but mostly made excellent recordings in the shadow of the big names and performed regularly.
We believe that Scotty McKay simply belongs in our unique ROCKS! series.

For the first comprehensive compilation, Bear Family has gathered all his rockers from the years 1959 to 1966. Recordings that were made for labels like Event, Swan, Lawn, Ace, Squire, Philips, Capri, Savannah Sound and Falcon. Many of these titles are hereby released on CD for the first time! In addition to his own rockers (and those under his birth name Max K. Lipscomb), McKay was a singer with Tommy & The Tom Toms between 1959 and 1962, but their rock recordings were initially not released as singles or on LP.

The accompanying book was written by our Chicago expert Bill Dahl. We here at Bear Family are absolutely sure: Scotty McKay's rockers like Evenin' Time', Midnight Cryin' Time, Baby Let's Play House, Don't Wait and many others will surely blow you away!

At some point around mid 1957, Max Lipscomb joined Gene Vincent's Blue Caps, later insisting that he was seventeen at the time. He played piano on 'Gene Vincent Rocks and the Blue Caps Roll,' hung around for a tour or two, and appeared with Vincent on 'The Ed Sullivan Show.' In truth, Lipscomb wasn't much of a pianist and only took the role because Vincent had decided on the spur of the moment that he needed a piano in his line-up. Lipscomb later returned to the Blue Caps as a vocalist and sometime bassist and guitarist during the band's last hurrah. By all accounts, Lipscomb was born in Dallas in 1937, which would make him twenty when signed on with Vincent, not seventeen. The only major piece about him, 'And They Gave Me Oklahoma and Tennessee' by Bob Dunham ('New Kommotion' #12) doesn't dwell on the early years. When the Blue Caps folded, Lipscomb and fellow Blue Cap Grady Owen took a bus to New York, and looked up Frank Slay and Bob Crewe, who were in surreptitious partnerships with Dick Clark.

Slay and Crewe agreed to record Lipscomb, and apparently Clark insisted on the name-change to Scotty McKay. "I cut a song called 'Rollin' Dynamite' for Parkway Records," McKay told Dunham. "A pretty nice record, a territorial hit. My record was very rock 'n' roll. The rockin' rollin'est. Never have I rocked and rolled like that. The Rays, who did 'Silhouettes,' sang background on it." The composer credit on Rollin' Dynamite was 'Jo Ann Owen' (presumably Grady Owen sidestepping a prior contract). The Rays were produced by Slay and Crewe for XYZ and Cameo Records, and Slay/Crewe came to Boston to negotiate with Freddy Cannon, which might account for their contact with Cecil Steen. It would have been very strange for Parkway, then riding Chubby Checker's first hit, The Class, to lease a record to a smaller label, but unless Slay and Crewe indeed made contact with Steen in Boston, it's hard to account for Event's role in what was otherwise a New York/Philadelphia session. Both songs were recorded in New York and published by Conley Music in Philadelphia. Al Hawkes has no recollection other than that it was Cecil Steen's deal.

The release dates reported in 'Billboard' tend to support the assumption that the Event record came first (May 1959), followed by the Parkway record two months later, so the likeliest scenario is that Slay and Crewe sold the record to Event, and, when it started to get a little action, pressured Steen to let them lease it to Parkway. McKay auditioned for a Dick Clark tour, but told Dunham, "We were a Ronnie Hawkins type band, except more southern than Hawkins," and Clark didn't like "Southern" at all. There was one more single on Swan Records (another label in which Clark held an interest), and then it was back to Texas on the bus. The story from that point is one of missed opportunities, bad breaks, and brushes with rich and famous as the labels grew ever smaller. He was on Lawn, Ace, Squire, Desk, Falcon, Charay, Pompeii, and quite a few others.

In 1963, he produced and co-wrote a Top 50 hit, Kirby St. Romain's Summer's Comin', but was soon embracing the British Invasion with the same fervor with which he'd once embraced rock 'n' roll. He toured the US with the Yardbirds, and they brought him back to England for a one single deal with Columbia (UK). Soon after that, McKay recorded The Train Kept A Rolling, which he'd learned from the Yardbirds. His version was rumored to have Jimmy Page on guitar, although the revelation that it was Blair Smith reduced its value quite considerably. McKay wasn't doing well when Dunham spoke to him in 1972 (he was a local promo man for UA Records), but was still hoping for the big deal. His later years were spent dabbling in Christian music. A heart attack claimed him on March 17, 1991.

This is fascinating as it is rocking, the sleeve notes are extensive, this release is a tremendous tribute to the career of an unsung artist tragically dead at the age of 50

This is fascinating as it is rocking, the sleeve notes are extensive, this release is a tremendous tribute to the career of an unsung artist tragically dead at the age of 50. Delve deeply into this and meet Scotty McKay, you'll be glad you did

A long overdue release at all and a fantastic add to 'The Greatest Rock & Roll series' ever! Thanks for this tremendous CD! Scotty McKay was a real wild man!