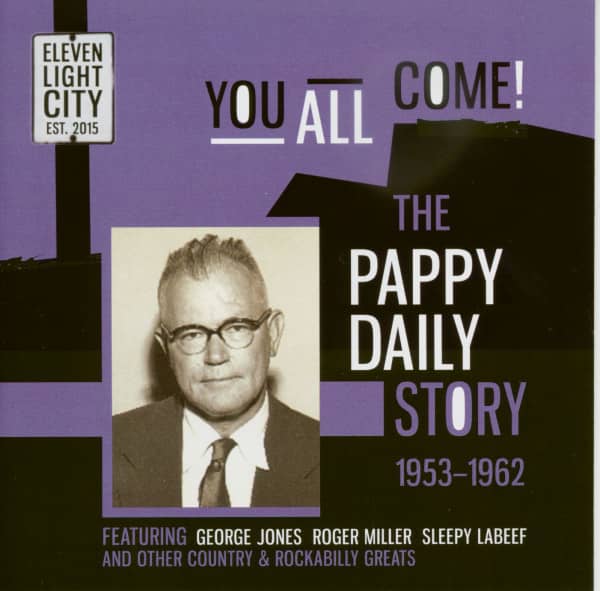 (Eleven Light City) 22 tracks (53:21) with 12 page booklet.
Operating outside of the major label studios where Nashville Sound was the dominant force in Country music, Pappy Daily forged one of the greatest legacies in Country and Rockabilly music with his work as a producer, A & R man, and his general business savvy. His nurturing and mentoring of George Jones, who would have arguably not been the legend we know today if it wasn't for Pappy's guiding hand, would be enough to secure his name in the musical history books but Jones was only part of a much bigger story. Aside from Jones, Daily also discovered such titans as The Big Bopper and Roger Miller but it wasn't only those who would go on to become megastars that would benefit from Pappy's expertise with many not so well known artists - such as Dave Edge, Frankie Miller, and Benny Barnes benefiting from his stewardship. Other Americana favourites such as Sleepy LaBeef, Link Davis, and Jimmie Skinner, also cut some of their best work whilst under the auspices of Pappy. Featuring images from the daily family archive as well as an exclusive interview with Pappy's grandson. 16 page booklet with extensive notes, rare images, and excellent design.