"I thought Benny was a fine singer. He was a great artist with a fine stage act. I never could understand why he didn't make it big." 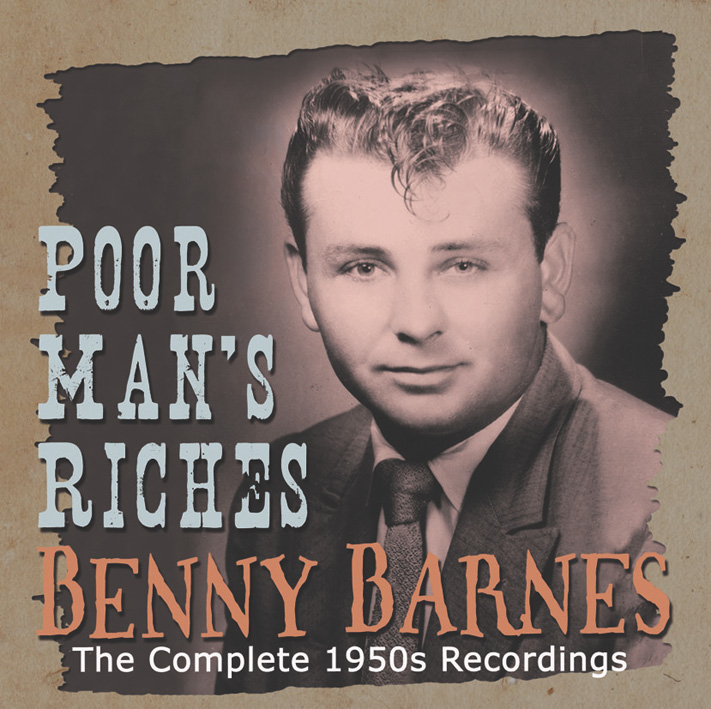 Improbable as it may appear from this distance, there was a brief moment when East Texas country singer Benny Barnes seemed poised to become the next George Jones – with the help and enthusiastic approval of Jones himself, no less. Just shy of his 21st birthday, Barnes had scored a huge hit in 1956 with only his second record, Poor Man's Riches, and would quickly graduate from the beer joints of his native Beaumont to the national spotlight of the Louisiana Hayride. He was boyishly handsome, had convincing stage presence, and an instantly recognizable vocal style that melded influences like Jones and Lefty Frizzell with that of his early idol, Hank Snow. He had defied current trends and record industry wisdom by hitting with a hard country performance at a time when rock 'n' roll had threatened to consume everything in its path.

George Jones had used his clout to get Barnes signed to his label, the fledgling Starday Records, gave him two of his original songs to record for his debut release (a gift Jones only rarely extended to other artists), and generally treated the younger singer as an equal. They both lived in Beaumont, played the same clubs, recorded with the same studio musicians, and had the same producer – Texas music legend H.W. 'Pappy' Daily.

But there are no sure bets in the record business, as Barnes would bitterly learn when neither these advantages nor the patronage of a major label, Mercury, would help him find a follow-up hit to Poor Man's Riches. The record buying public had spoken, and as the new decade dawned, it was clear that there would be only one George Jones. Those in Jones's orbit -- Barnes, James O'Gwynn, Eddie Noack, Country Johnny Mathis, Sonny Burns, Johnny Nelms, and Glenn Barber, to name just a few -- were destined to dwell a far distance behind his success, attaining local and regional fame, and the occasional hit record or song, but nothing more. It seemed as if the music industry could only find room for one East Texas country singer, and Jones, with his remarkable voice, and hellraising ways, had captured the essence of his time and place so well, so definitively, that there was hardly any need for further elaboration from others. And so it goes. While Barnes would release many more singles over the next 25 years, by the time of his death in 1987, he was essentially forgotten by the country music business.

In this overdue retrospective, Bear Family gathers together Benny Barnes' complete 1950s recordings, most reissued from the original master tapes for the first time, including two previously unissued performances. It was prolific four years for Barnes, commencing with a couple of early acoustic demos, and continuing through his singles for Starday, Mercury, Dixie, Faith, D, and finally back to Mercury at the close of the decade. Though there were a few definite missteps during this period, it's equally undeniable that Barnes's talent deserved wider recognition than it received – then and now.

A Passing Fad: The Early Years

The eldest of five children, Benjamin Milam Barnes, Jr. was born January 1, 1936, in Beaumont. The family home was located just west of the city, in the tiny town of Amelia, very close to the Spindletop oil field. Spindletop had ensured Texas's future as an oil capitol when it erupted in 1901; it was still generating barrels during Benny's childhood years. Oil touched everyone's lives in the area. Benny's father was an oil field mechanic, and it was assumed that the boy would follow his dad into the grueling, but stable oil business.

Randy Barnes, who would later sing and tour with his older brother, remembers that Benny "started playing around Beaumont during high school, or just out of high school. He would sit on a curb downtown, and play his guitar and sing. Benny was four years older than me. We had a younger brother, Jim. He and Benny and I used to get together when we were younger, and played around some of the local clubs in Beaumont. Jim had a washtub and a broomstick that he made a bass out of, I played drums, and Benny was guitar, singer, and so forth. We had a ball together -- singing and playing since we were real little."

"At the age of about ten," Benny would explain years later, "I would bring a little plastic ukelele to school to bang and sing on, entertaining my schoolmates at recess. At that time, I sang popular and semi-classical music. Then, at the age of twelve, my taste for music suddenly changed to hillbilly. So my folks, thinking it was a passing fad, bought me a very cheap guitar for Christmas." His parents soon realized how wrongly they had estimated their son's musical interests. "I eventually learned to play just about anything. I was invited to play for school and church programs, as well as civic clubs... I did so until I was about 15."