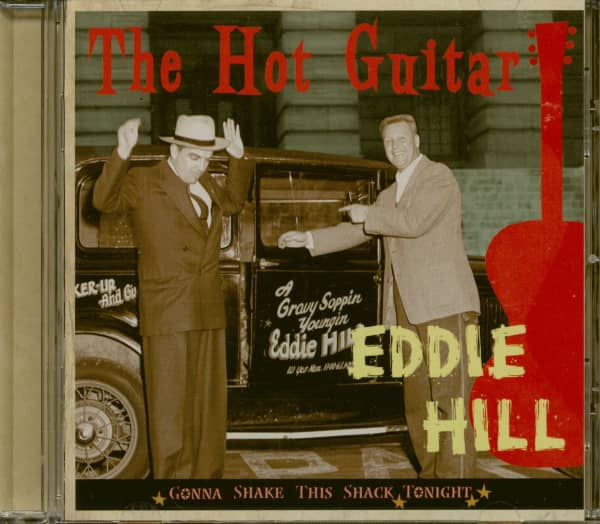 Smilin' Eddie Hill was a singer and pioneering country music deejay whose career took him to Knoxville, Tennessee when Chet Atkins, Johnnie & Jack, and others were there; then took him to Memphis to work with the Louvin Brothers (Elvis and Johnny Cash listened in every day); and then to Nashville where he became a fixture on the Opry's home station, WSM.
Eddie Hill's biggest record was his rompin', stompin' 1951 hit The Hot Guitar. It's here together with Black Denim Trousers And Motorcycle Boots and other songs including Cold, Cold Woman (The Hot Guitar), Steamboat Stomp, Hard Road To Travel, and Knock It Off. It all fits right into our much acclaimed 'Gonna Shake This Shack Tonight' country boogie series. This CD, compiled by rockabilly expert Bill Millar, was recorded between 1947 and 1957...Eddie Hill's golden decade. It's a wild mix of country, country jazz and rock 'n' roll recorded for Apollo, Decca, Mercury, RCA Victor and Columbia. Every song is full of
Eddie Hill's larger-than-life down-home personality. Fans of great pickin' take note: Eddie Hill was a sophisticated musician who surrounded himself with musicians of the highest calibre, so these are very accomplished recordings, too. Backing musicians include Chet Atkins, Hank Garland, and Willie Nelson's compadre, Paul Buskirk. 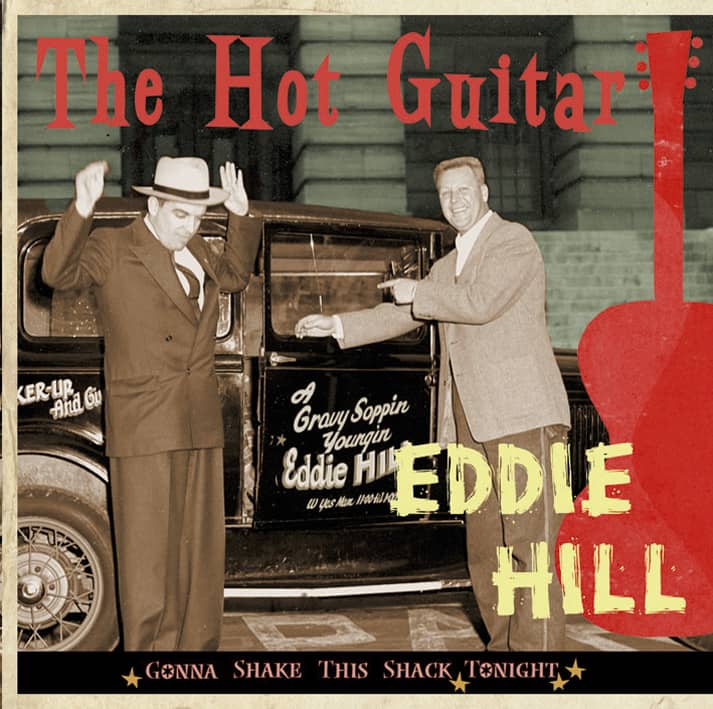 "I always figured if you'd do right, try hard enough and put your faith in the Man Up There, something's going to give sooner or later."

If Smilin' Eddie Hill is widely remembered by country music fans, it is as a pioneering country music deejay who held forth for years from the Grand Ole Opry's home station, WSM. Or perhaps they know him from his early day association with two legendary country music duos, Johnnie and Jack and the Louvin Brothers. An early inductee into the Country Music Disc Jockey Hall Of Fame, he had a notable career as a bandleader prior to moving to Nashville in 1952. He never enjoyed any hits beyond his classic cover of The Hot Guitar in 1951, which nevertheless failed to dent the charts nationally. He did, however, wax a number of memorable sides in a recording career that lasted more than a decade beginning in 1947. While his fame as a recording artist never matched his fame as a radio personality, Eddie Hill has long enjoyed considerable currency among collectors for his mix of novelty country, country jazz and rock 'n' roll. This collection gathers the cream of his recorded output for Apollo, Decca, Mercury, RCA Victor and Columbia, from 1947-57, and captures Hill in many guises. His persona and his voice were decidedly country and much of his output sought to capitalize on his larger-than-life down-home personality. But Hill was a sophisticated musician who liked to surround himself with musicians of the highest calibre, and the mix of hard-country novelty, first with country jazz, both slick and hot, and later with R&B and rock 'n' roll, was often fascinating, usually irresistible and always palatable. This set includes The Hot Guitar and its sequel Cold, Cold Woman, and such classic tracks as Steamboat Stomp, A Hard Road To Travel, and Knock It Off, and finds Hill in the company of such legendary musicians as Chet Atkins, Hank Garland, Dale Potter, Paul Buskirk, and Lightnin' Chance, among many others – the cream of both his pre-Nashville bands out of Memphis and of early Nashville session stalwarts.

James Edward Hill (or Eddie J. Hill per his application for Social Security) was born on July 21, 1921, one of eight children. According to an article in 'Country Song Roundup,' he was born at Etowah in McMinn County, where his father was superintendent of a cotton mill, though Walt Trott in his entry for Hill in 'The Encyclopaedia Of Country Music' gives his birthplace as Delano, Tennessee. Trott called Hill a jack-of-all-trades and he was. His father was a fiddler, his grandfather a banjoist and his father and a banjo-playing uncle would play for local dances in his youth. Hill took up guitar and in his teens formed a string band (he would also become proficient on bass). Perhaps he wasn't possessed of the best singing voice, but he was an accomplished vocalist, too, his ebullience, charisma and taste more than compensating for any technical shortcomings.

He won a talent contest in Chattanooga in the late '30s. Writing in the 'Nashville Tennessean'in December 1956, Elmer Hinton tried to recapture the moment that launched Hill's musical career in earnest: "He picked the guitar, sang and danced and clowned his way into the hearts of the audience and won the top prize in a breeze."  The top prize was $15 but the performance also attracted the attention of local station WDOD and led to a job offer, which Hill turned down because it didn't include the rest of his band. Significantly, perhaps, the talent contest victory occurred around the time Hank Penny and his Radio Cowboys were a popular radio and recording attraction in the area. Hill's self-effacing, hick-ish spiel and his vocals with an often very sophisticated and jazz-inflected band sound paralleled Penny's to a certain extent. Hill's hillbilly content was stronger than Penny's to be sure, and he had a healthy respect for more basic Southeastern musical styles that Penny lacked, but the similarities and Penny's popularity in the area as Hill was coming of age may indicate a real influence.

While Hill turned down the offer from WDOD, he soon landed a spot on WROL in Knoxville, where his father had relocated to work at a cotton mill. From WROL, he graduated to WNOX and its highly popular 'Mid-Day Merry-Go-Round.' WNOX and the 'Mid-Day Merry-Go-Round' boasted a lot of legendary country talent, like the Carlisle Brothers, but it was also a magnet for jazz-minded country musicians in a way that Nashville was not in that era. The 'Merry-Go-Round's'house band was a jazz group, the Dixieland Swingsters, who were anchored by trumpeter Dave Durham, a former member of Clayton McMichen's Georgia Wildcats who also played fiddle and banjo. The station was also home to a lot of jazzy string musicians, most notably mandolinist Kenneth Burns and guitarist Henry Haynes aka Homer and Jethro, and guitarist (and fiddler) Chet Atkins. Additionally, it boasted a few jazz minded accordionists including Tony Musco, Musco's double-cousin Tony Cianciola, and Woody Doxtator. Mel Foree, later a well-known songwriter, was a local exponent of Southwestern style western swing, and Hill, too, seem to have been orientated heavily toward pop and jazz, while still loving the traditional country music of the region. Hill seems to have realized early on that a straightforward string swing pop band was never really going to go over big with hillbilly audiences in the area, anyway, and in 1941 he hit upon a formula that he would maintain into the next decade. Mel Foree and Cliff Carlisle, regional correspondents in the music mag 'The Mountain Broadcast And Prairie Recorder,' wrote in September 1941, "Eddie has just returned from Asheville, N.C., and made a wise decision. He has decided to grow a little honest-to-goodness corn in his already very popular group. He signed Leon Scott and Claude Boone, a couple of former Decca and Bluebird recording artists. These boys can really blend their voices on those old time ballads. Scott is also one of the best fiddlers in these parts. This popular group have a program of their own and also star on the daily Mid-Day Merry-Go-Round." This astute addition of a Southeastern-styled harmony duo to Hill's more sophisticated string combo would be repeated with Hill's partnership with Johnnie and Jack, and with his later association with the Louvin Brothers and the lesser known Johnson Brothers. It assured – along with Hill's own down home persona – that the more uptown elements in his groups wouldn't alienate listeners who preferred what Foree and Carlisle had called "honest-to-goodness corn."  It's unclear how long Scott and Boone remained with Hill, and Walt Trott reports that Hill relocated for a time to Cincinnati, but in 1943 Hill teamed with Johnnie Wright and Kitty Wells, and Eddie Hill and his Mountain Boys morphed into Eddie Hill and the Tennessee Hillbillies. Wright's long-time singing partner Jack Anglin had been drafted and Hill convinced Wright to team-up. Juanita Milligan, who replaced Cliff Carlisle and Mel Foree as the area correspondent for the 'The Mountain Broadcast & Prairie Recorder,' reported in the December 1944 issue that the Tennessee Hillbillies at the time (probably as of about September of '44) included Hill, Wright, Wells, and two Southeastern instrumental stalwarts, mandolinist Ernest Ferguson and fiddler Marion Sumner. At one point during the war, the group also included Chet Atkins and perhaps a teenaged Billy Bowman. Steel guitarist Bowman, the nephew of famed fiddler Charlie Bowman and best known for his future stint with the Texas Playboys, was unquestionably a member of Hill's group in 1946-47, but his nephew Jim Bowman reports that at one point around 1944-45 Hill's band included only Hill, Bowman, Johnny Wright and Chet Atkins (and that the group, perhaps not surprisingly, played a lot of jazz).

Juanita Milligan, clearly a fan of Hill's, indicated that the Hill-Wright pairing had proved extremely popular, but only a few months later Hill had gone Hollywood -- literally. Milligan wrote in March '45 that, "…over at WNOX in Knoxville we find that Eddie Hill of the Tennessee Hillbillys [sic] is Hollywood bound for a screen test, leaving behind the Hillbillys, who are still going strong. Since Eddie has formed a team with Johnny [sic] Wright they have broken all records in the places they have played personal appearances. Also heard with them is the bashful little girl friend, who in private life is Mrs. Johnny Wright. We'll all be watching to see that first picture of Eddie's."  Hill's Hollywood sojourn hasn't really been mentioned in the few biographic blurbs dealing with his career, but it was no quick in-and-out. Milligan wrote "that December that Hill was 'now in Hollywood' and that the Tennessee Hillbillies had gone to WPFT in Raleigh." Despite reportedly initially going for a screen test and then apparently spending over half a year in Hollywood, Hill is not known to have appeared in any films during this time (he did later, when he was in Nashville, however). For a musician whose tastes ran toward string swing, however, he was definitely in the right place at the right time. Hollywood in 1945 was bursting at the seams with hot and large sophisticated western swing bands. Foremost among these were Bob Wills and his Texas Playboys and Spade Cooley and his Orchestra. Fellow Southeasterners Hank Penny and Curley Williams and his Georgia Peach Pickers also headed to California around the same time. Surviving radio shows from later in Hill's career make clear his love for western swing and his desire to surround himself with men who could play it. His daily repertoire was dotted with tunes associated with Cooley, Wills and similar groups, and that didn't stop once he headed to Nashville for good in the early '50s. Listen, for example, to the mid-1950s Armed Forces program that closes this set, which is entirely composed of tunes long associated with western swing, particularly Spade Cooley and Bob Wills.