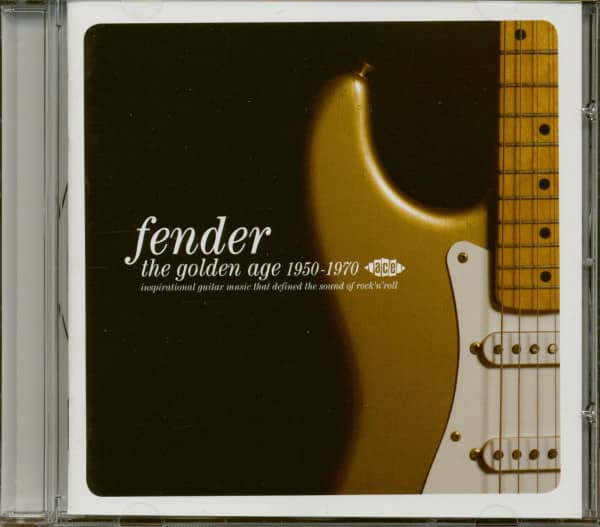 (Ace Records) 29 tracks (66:17) with 20 page booklet.
“Leo Fender’s contribution to the sound of modern music is immeasurable. The pop music explosion of the 1950s and 60s would not have happened without the electric guitar and, perhaps more importantly, the electric bass.”

So begins Martin Kelly’s notes for the CD of his book about Fender guitars. A book about music of course lacks the medium that it describes, so Martin came to Ace with a proposal to produce an accompanying CD that would make his pages even more vibrant. We were more than happy to celebrate the great sounds that Leo Fender helped conceive through his inspirational instruments.

As overseer of this CD, I was out of my depth in guitar minutiae, but was able to assist on the technical end and enjoyed a sharp learning curve in great guitar sounds. I thoroughly dug those ringing twangs of Bob Wills and Tennessee Ernie Ford. With Ike Turner and Otis Rush I was in more familiar music territory. The more poppy Crickets’ track ‘I’m Looking For Someone To Love’ was an inspired choice by Martin. It was the flip to the original ‘That’ll Be The Day’ which I’d managed to miss hearing for 55 years. ‘Suzie Q’ and the original ‘Folsom Prison Blues’ are better known numbers; listening to them in this guitar-based context gives them new relevance.

Guitar-led instrumentals were a must for the compilation and it is wonderful to relive the splendour of the Ventures’ signature tune and to hear the mighty Shadows at their most melodic. Breakaway Shadow Jet Harris then moves the spotlight to the renowned Fender bass on ‘Besame Mucho’. Booker T’s ‘Green Onions’ and Dick Dale’s ‘Miserlou’ are at the pinnacle of their genres and Jack Nitzche’s ‘Lonely Surfer’ shows how an inspired producer can use the guitar within a bigger production.

It is then back to basics with the Kingsmen’s ‘Louie Louie’, followed by Ronnie Hawkins’ ice-cold take on ‘Who Do You Love’. The Beach Boys and Bobby Fuller Four then demonstrate how to play straight down the middle pop: no frills but pure class. Then representing the awakening of British youth to the American dream, we have the Yardbirds’ take on Billy Boy Arnold’s ‘I Ain’t Got You’, a song that failed to score for its creator but became a belated blues classic once Eric Clapton had stamped his seal of approval on it.

Speaking of the blues, ‘Rock Me Baby’ by Otis Redding reminds us all that the world lost a brilliant blues singer, as well as the ultimate soul man, when his plane crashed in December 1967. By the time of this recording, Lewis Steinberg had been replaced by Duck Dunn on Fender Precision Bass duties.

As reflected by the Nashville-recorded Fender jingles, country music was always dominated by the guitar sounds of Fender. Buck Owens & the Buckaroos’ ‘Buckaroo’ features not only Fender electric and bass but acoustic too. The switch to the soul perfection of King Curtis’ ‘Memphis Soul Stew’ is surprisingly seamless and that city’s home-grown Willie Mitchell sound on ‘Soul Serenade’ shows how long-lived top flight R&B was down there. It is then just a year’s jump, but a small world away, to 1969 and the Velvet Underground’s 12-string Fenders. That is neatly followed by ex-Yardbird Jeff Beck on his Stratocaster and Stone-to-be Ron Wood playing a Telecaster bass; all in the admirable cause of helping Donovan’s ‘Goo Goo Barabajagal’ make musical if not literal sense.

I still may not be able to pick a Fender out in a crowd, but I now know how much listening pleasure I have derived from them. (Ady Croasdell)