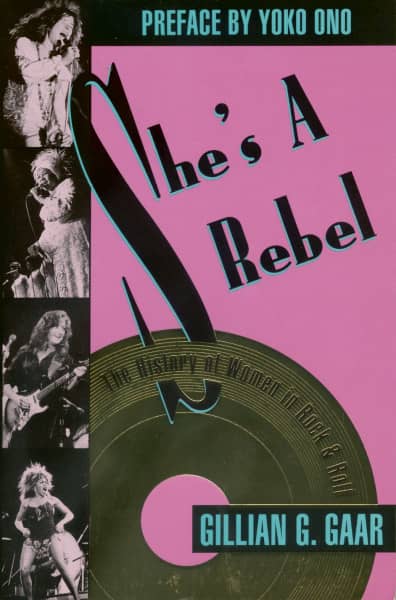 This is the fascinating story of the women who have shaped rock and pop music for four decades. She's A Rebel spans the entire spectrum of rock & roll, from the early rhythm & blues singers of the 1950s such as Big Mama Thornton—who topped the R&B charts with "Hound Dog" three years before Elvis did—to the women rappers and pop icons of the 1990s such as Queen Latifah and Madonna. In between it covers the girl groups, Motown, folk rock and the counterculture of the 60s, the women's music scene and the punk explosion of the 70s, and the all-girl bands and rising stars of the 80s and 90s. The book is packed with interviews, facts, and lively personal anecdotes from women performers, writers, and producers in the music industry.

Journalist Gillian G. Gaar also provides a provocative commentary on the rock music busi-ness, long dominated by men and controlled by money, and how the emerging power of women has brought about significant changes. Compulsively readable and thoroughly entertaining, She's A Rebel is a spirited retelling of rock history—from the women's perspective.

"Gillian Gaar proves that American rock & roll is not a boys' club. Even though we hear them on our radio every day, the voices of women in rock have been largely ignored by our pop-culture's chroniclers. At last, they have a historian of their own." - Susan Faludi, author of Backlash

"She's A Rebel shakes us out of the pervasive attitude that women's place in rock & roll is to provide anonymous backup scenery. At last we have a lively history of our rock heroines whose raw talent and bravado liberate the rock & roll rebel in every woman." - Naomi Wolf, author of The Beauty Myth

"Gillian Gaar is a demon researcher whose book graphically documents the stupid, nasty sexism that so many women have encountered in the pop music business. At the same time, she splendidly captures all the flash, trash and energy that make rock & roll so alluring in the first place." - Lindsy Van Gelder, contributing editor, Ms. Magazine

"At last—a long-overdue antidote to the male-dominated view of rock history, by an author who combines scholarship, insight and readability in equal doses." - Peter Doggett, Record Collector