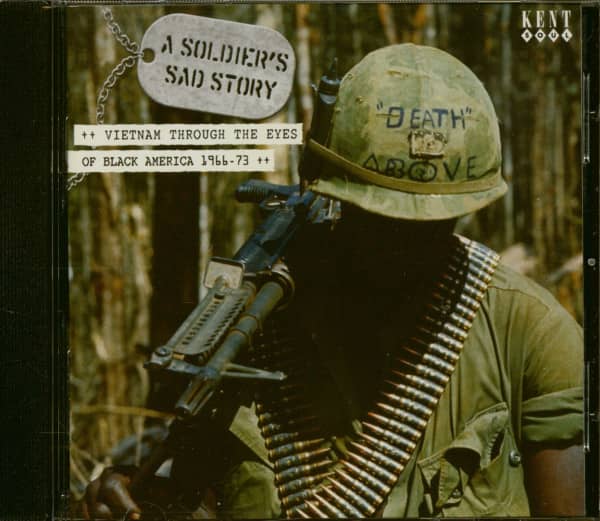 (Ace Records) 24 tracks - 16 page booklet
Some releases come together in a relatively short period of time, while others require a longer gestation period. This time, we're proud to bring you one that falls firmly into the latter category. It's been a fortnight short of two years since we first began work on a project that would attempt to tell a story-in-song of Black American participation in the Vietnam war, a project that has been in the works for the whole of that time.

The original annotation plans fell through not once, but twice, both times at the last minute. Just as we thought everything was running smoothly, we had to revise our originally perceived track listing. (One of the tracks we'd licensed had suddenly become worth three times as much in its licensor's eyes as had already been agreed, due to the fact that "war sells records" - a new one on us, we must admit.) It often felt like this project was the place where catastrophe and calamity meet - but, finally, 100 weeks after it was first discussed, A SOLDIER'S SAD STORY is ready. As compiler and part-annotator, I could hardly be more pleased with the end result.

The CD attempts to present the chronological scenario of a young black individual's odyssey through the Vietnam war. It is not always a particularly happy scenario, but then war itself is never particularly happy for most of those that fight it, regardless of colour. However it is generally accepted that black Americans got a much rawer deal over 'Nam than did their Caucasian counterparts.

The Vietnam war was especially well-documented in soul circles. Indeed, apart from country music, no other genre of music can offer anywhere near as much social commentary on the subject. It is no coincidence that the overwhelming majority of enlisted personnel came from either poor white or poor black America, where Country and Soul ruled their respective musical roosts.

James Maycock's frank sleevenotes tell their own terrible tale of the ignominies suffered by many enlisted black men - often at the hands of their white colleagues as well as the enemy - and would be recommended reading, whether or not there was a CD to accompany them. But away from James' pointed, poignant commentary there's a wealth of great music here that paints a vivid life portrait for anyone who served their country, however reluctantly, starting with the Monitors' apprehensive young inductee who's biggest worry is "I hope (my girl) doesn't find another man" and finishing with Swamp Dogg's titular 'hero' - if that's the right word - whose war hell has left him with "a hole in (my) arm where all the money goes". A familiar tale for many of Vietnam's fighting men if, fortunately, not the tale of all who served.

In between there are sides that deal with every aspect of war, from being apart from family and friends via communications to and from home and avowed statements of triumphancy from those eager to join the fray - to vociferous comment from the home front and finally, the stark realities of returning to a world of disability benefit, readjustment & unemployment and - for far too many - addiction and death.