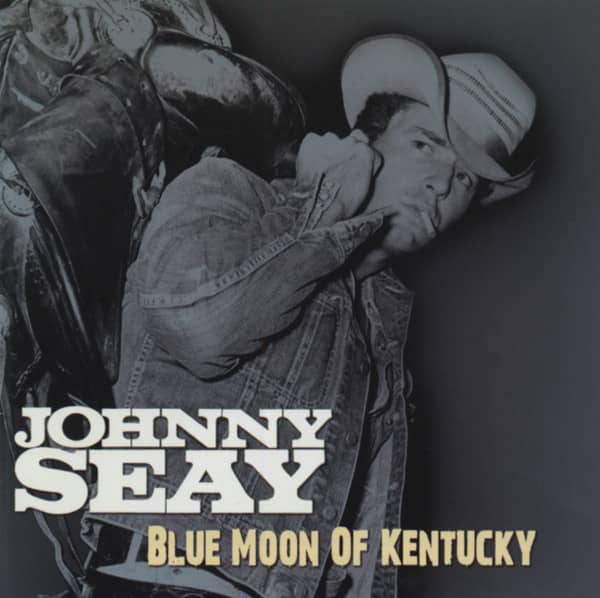 Johnny Sea recorded quite prolifically for ten years between 1958 and 1969, but we've focused on his studio recordings for NRC and Philips when producers Bill Lowery and Shelby Singleton encouraged him to record in the Johnny Cash style. In fact, Johnny C. was enough of a fan of Johnny Sea to offer him a song, My Old Faded Rose, and Johnny Sea got into the charts with Johnny C.'s adaptation of Frankie's Man, Johnny as well as a song closely associated with Waylon Jennings and Bob Luman, My Baby Walks All Over Me.

These recordings were no mere act of copyism. Johnny Sea put his unique spin on the Johnny Cash style, and all Cash fans will enjoy hearing this unique collection of '50s and '60s recordings.

In the mid-to-late 1950s, as in the mid-to-late 1960s, and the mid-2000s, Johnny Cash was a hot property. For someone so influential, he attracted surprisingly few soundalikes, but Mercury's Shelby Singleton always had an eye for an angle, and he found a kid with a soulful baritone named Johnny Seay. Now, Seay was an Irish name that should have been pronounced Shay, but everyone pronounced it Sea, and Singleton made the obvious connection: Johnny Cash… Johnny C… Johnny Sea.

"I believe my mother was without a doubt the greatest influence on my music," says Johnny. "She was a great singer. I can still remember some of the songs my mother sang to us when we were really small like 'Put My Little Shoes Away,' 'Little Pickaninny' and 'Babes In The Woods.' My sister and I both cried when she did songs of this kind, and I still have a tough time singing those songs without choking back tears."  Things weren't so good after the divorce, though. "From time to time my sister and I would have to go to my father's house in St. Petersburg, Florida, to try out his new wife to see if it would work,"  he wrote later. "I guess it didn't. We never stayed too long. Sometimes, we stayed with my aunt and uncle in Union City, Georgia, or my grandmother in Gulfport. From time to time, we lived with my mother and stepfather in Atlanta." Johnny got his first guitar when he was ten, but it was sold to buy shoes for his sister. "Although," Johnny adds, "I've wondered many times if my grandmother didn't get rid of it because I was driving her crazy with it instead of my sister needing new shoes."

The early sessions were issued on Lowery's NRC Records. The first single coupled Johnny's I Love You with Jerry Reed's It Won't Be Easy To Forget. Johnny Cash had recently recorded Reed's If The Good Lord's Willing, and Reed might have written It Won't Be Easy as another song for Cash. Bill Lowery had published Young Love, and probably saw I Love You as a song in the same vein. Shelby Singleton, then a salesman for Mercury Records, signed Johnny to a management deal and brought him to the Louisiana Hayride in Shreveport. Every other Saturday, Johnny appeared on the Cowtown Hoedown in Fort Worth. The Hayride ads for November 1958 mention that Johnny was back "by popular demand," so he probably joined sometime around then, but was gone early the following year. The Hayride, like most radio barndances, was fading away, anyway.

Toward the end of 1958, Johnny Cash's first Columbia LP appeared with a new arrangement of the immemorial folk blues, Frankie And Johnny. Cash was atop the country charts with Don't Take Your Guns To Town, and Singleton knew that some dee-jays were spinning Frankie's Man, Johnny so he persuaded Lowery to rush out a cover version by Johnny Seay. It climbed the country charts, eventually reaching #13 before Columbia wised up and rush-released Cash's version, which reached #9.

Write an evaluation
Evaluations will be activated after verification.
A Yodel For The BEAR FAMILY Label -Part 3- by Kenny Weir
Merle Haggard – 'Untamed Hawk' Merle Haggard – 'Hag' Another blind spot joyfully banished. I'm a Johnny-come-lately when it comes to Hag, but with these two boxes I've become a zealot. Why are Johnny Cash and Gram Parsons, just for example, so revered in rock circles when Hag's associated with Okie From Muskogee and not much else?
06.03.2015
Similar products Customers also bought Customers also viewed
Similar products
Johnny Cash: Johnny Cash & Patrick Carr: Autobiographie PB Art-Nr.: 0003090