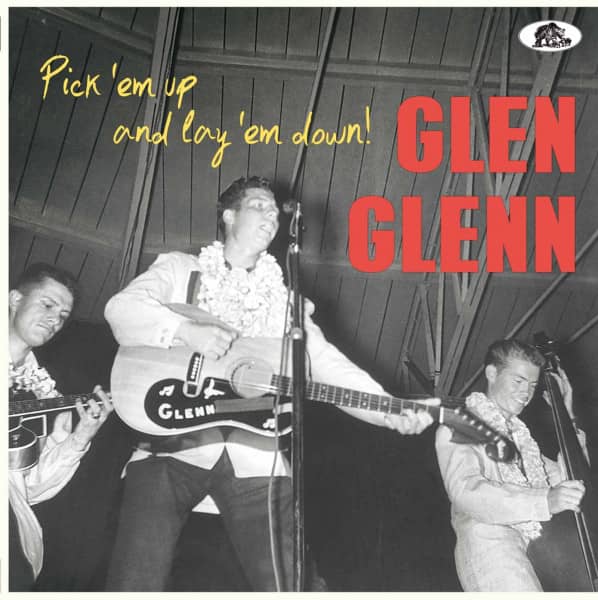 ‘Glen Glenn is a name held in high esteem by rockabilly fans and was a second generation artist who developed his own style’.
• 12 recordings from the Era label catalog, 1955–1963.
• Contains different versions from the originally released records.
• 10“LP.
•       Information and liner notes from Deke Dickerson.
• Carefully restored and mastered for our high-quality 10“ LP series.
Glen Glenn and Gary Lambert had to wait until the 1980s for the new generation of fans to pay homage to them and ecstatically dance to their three Era label releases issued under Glen’s name, and it is these recordings on which their reputation is firmly cemented. In the year 2018 Bear Family Records offer, twelve recordings, with many significantly different versions to the issued recordings. The sleeve contains the 110 gram vinyl, 10 inch album,  and fascinating information from scribe Deke Dickerson.
To give you a taste of some of the recordings and what to expect. The story beings in 1955, with the earliest recording which Glen made with his long time musical partner Gary Lambert, who sadly passed away on January 12, 2018. The Glen and Gary sessions include a recording from Glen’s cousin Porter Wagoner, Company’s Comin’, and we decided upon the lesser heard take two of It Rains Rain which was recorded with the core of Wynn Stewart’s band in 1956. Certainly they were still in the country side of music, however they had a changing sound in development.
Rose Maddox had gone solo and her brothers Henry and Fred took Glen under their wing and from this association two country recordings from 1957 are offered You’re Not Mine and Ray Price’s I Made A Mistake And I’m Sorry. This musical association resulted in Glen changing his style and immersing himself into rockabilly music, which our next recording perfectly testify.
The six recordings for the Era label have an enticing quality, and Glen’s country edged vocals fitted perfectly to rockabilly music, and together with Gary’s guitar they created something a little different. The Goldstar Studio echo and reverb are used to perfection, producing the ’crème de la crème’ of recordings which have excited music fans for many decades. However as always from Bear Family we offer on this album something a little different.
The album includes an alternative and slightly faster version of One Cup Of Coffee (take 1), and after three false starts Gary perfects the introduction, and the resulting Would Ya, has a rugged feel embellished with a more driving tempo than the issued version. For collectors we offer two rockabilly classics in development, Everybody's Movin (take 2), and Blue Jeans And A Boy's Shirt (take 2), the former has a faster tempo and is not as tight as the issued version. The latter is a looser work in progress version, and sans the later over-dubs which were added on the released version. Tape exploration furthermore located stereo versions of Kitty Kat and Wait Wait (One Year Longer) and both see the light of day on this album.
Our album ends its musical legacy in 1963 with two performances from a demo session held at Gary Lambert’s house. Both I Think of Somethin’ Funny and My Eyes Are Open move in direction towards West Coast honky tonk and country amalgamation, a style which was in its infancy.
As always with Bear Family you will hear the best possible sound from our products, and within this album you hear Glen’s voice and Gary’s guitar in a clarity you need to hear. This is an album which rockabilly fans have been waiting for and a perfect tribute to Glen’s long-time partner Gary Lambert.
Mark Armstrong 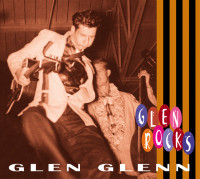