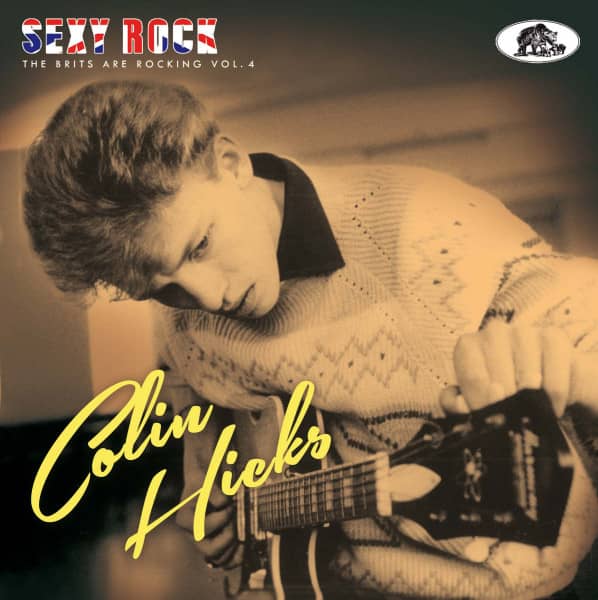 1-CD with 36-page booklet, 27 tracks. Total playing time approx. 65 minutes.
• Bear Family finally supplies the long overdue compilation to Colin Hicks, the quite unjustly neglected brother of Tommy Hicks, better known as Tommy Steele!
• CD with all the rocking titles, all of them sought-after rarities!
• Altogether 27 songs from the years 1957-1961, which he recorded both in England and in his later adopted country Italy.
• Among them are several cover versions, which were recorded in the studio in an extremely explosive way, especially the recordings with his Cabin Boys.
• Also included are extraordinary rarities, such as the Italian sung Impazzivo Per Te, with the Tony De Vita Orchestra, which appeared in 1960 as a magazine supplement only on so-called Flexi-Disc!
• Also included are both sides of his first single in 1957 for the British Pye Nixa label.                                                                                                                         With this fourth edition of 'Brits Are Rocking', we are giving Tommy Steele's 'little' brother the monument he deserves. A great British rocker!
• The 36-page colour booklet contains the biography written by British music journalist Ashley Wood, plus many rare photos and memorabilia!
The career of Colin Hicks
This compilation of 27 songs is not in chronological order, but nevertheless outlines the interesting career of the Brit rocker. The Brits have developed their very own kind of Rock 'n' Roll and Rockabilly, mostly a lot more aggressive than the originals from the USA. And this is where Colin Hicks is the best example. He recorded for Pye Nixa in England and toured extensively, but was overshadowed by his highly successful brother Tommy Steele. Through interesting circumstances he came to Italy, where he became a celebrated Rock 'n' Roll star and even appeared in several movies!
Sexy Rock
We have named this CD after Hicks' greatest success in Italy, Sexy Rock, which is also presented in the 1960 film 'Ombre Blanche'. Whether Hicks interpreted classics by Chuck Berry, Buddy Holly, Eddie Cochran or Jerry Lee or made his own songs, he could not be outdone in his joy of playing with his Cabin Boys. The band literally explodes in their guitar solos, the drummer lets his drum kit bang forward from the off. So Tutti Frutti gets a completely new outfit. Another great example is his successful version of Giddy Up A Ding Dong - watch out for the great accentuation of the drummer! Crazy Cavan Grogan would now say: "Rockabilly Rules Ok!"
Included is a 36-page color booklet with the story of Colin Hicks, written by British music journalist Asley Wood, plus rare information, rare photos and illustrations!

The presentation turns out to be in favor of Bear Family, as no one can match a 36-page CD booklet and certainly not the six sheets of the Jasmine inlay. Of course you pay for this, and your choice will depend in the first place on which and how many songs you absolutely want to have in your collection.
The Bear Family CD ends with an uptempo Hang up My Rock 'n' roll Shoes but still that's exactly what Colin Hicks did: in 1963 he kept the music previewed and finally started working in the construction industry. I guess that's the reason why Hicks is forgotten today, because he got good material and was able to interpret it very well, listen to the fierce Blue Moon Of Kentucky. Colin Hicks is still alive and running at 80.

Excellent service and item as usual