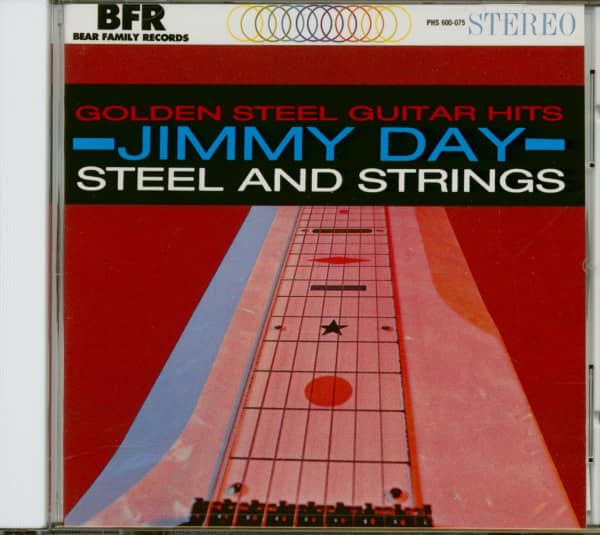 Perhaps the greatest pedal steel guitarist of all time, Jimmy Day worked countless sessions and played on the road with Hank Williams, Elvis Presley, Jim Reeves, Lefty Frizzell, Ray Price, and Willie Nelson. In 1961 and 1962 he recorded two incredibly rare steel guitar albums for Philips Records, "Golden Steel Guitar Hits" and "Steel And Strings". On them, he tackled 24 songs that feature his beautiful tone, dazzling technique, and bottomless fund of ideas. The titles include Steel Guitar Rag, Panhandle Rag, Remington Ride, B. Bowman Hop, Bootheel Drag, Steelin' The Blues, Wild Side Of Life, and Texas Playboy Rag. Day, who was inducted into the International Steel Guitar Hall of Fame in 1982, continued to perform around Texas. He also played selected dates with Ray Price, until his death on January 22, 1999.
Jimmy Day has recorded six steel guitar instrumental albums - Steel And Strings, Golden Steel Guitar Hits, All Those Years, Jimmy Day & His Bud-dies Salute Don Helms, In Jesus' Name We Play and Jimmy Day & The Outlaw Texas Jam Band. He also made an instrumental album with Herb Remington, A Day With Remington.

In 1956, Jimmy started talking with Shot Jackson about building a pedal steel guitar. Not being very mechani-cal, he had little to do with the manufacture, but claims to have come up with the Sho-Bud name (Sho-t- - Bud-dy-). There are two pedal set ups on the pedal steel, the Day and Emmons set up. The only difference being that the first and third pedals are reversed.
Jimmy Day was inducted into the Steel Guitar Hall of Fame in 1982 and into the Texas Steel Guitar Hall of Fame in 1986. Herb Remington is the only other player to have been honored by both. In three consecutive annual polls of Austin music professionals con-ducted by 'Music City Texas' magazine in 1989, 1990, 191, Jimmy was overwhelmingly voted #1 Steel Guitar Player.


Normally, only the true fanatic knows about the sidemen, and indeed, there are many classic recordings where details of supporting players are in-complete or missing and nobody really knows who they were. However, a handful of players, over the years, have made even casual listeners aware of their identity - James Burton, Buddy Emmons, Vassar Clements, Johnny Gimble, Speedy West, Jimmy Bryant, Mark O'Connor, Jerry Douglas. These are men who stamp their own in-dividual brilliance on everything they are involved in, making liner credits all but irrelevant.

Among this select band shines the name of Jimmy Day, one of the great masters of the pedal steel guitar, and, to many, the greatest of all players of that instrument. His performing and recording history speak for themselves as to his standing in country music. This album simply confirms what many country music fans throughout the world have known for decades.