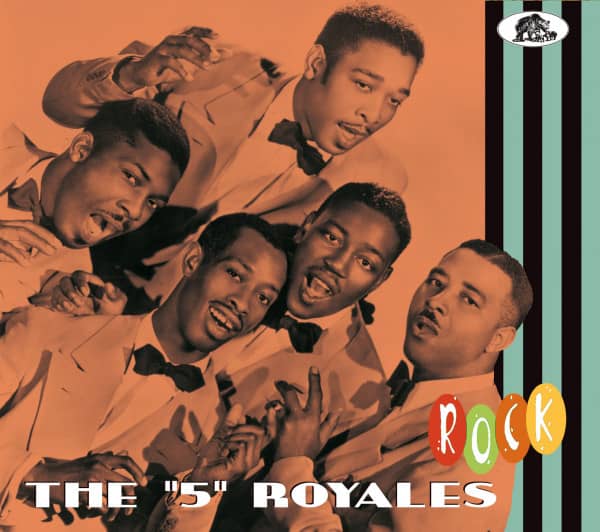 1-CD (Digipak) with 36-page booklet, 31 tracks. Total playing time approx. 79 min.
Like Clyde McPhatter and Ray Charles, The “5” Royales played a seminal role in combining melismatic gospel vocals with rhythm and blues lyrics and instrumentation to help invent soul music.  The powerhouse vocal quintet from Winston-Salem, North Carolina started out belting spirituals exclusively, but after signing with New York’s Apollo Records in 1951 detoured onto a secular route. They were unabashed rockers, as Bear Family’s new compilation of their sides makes abundantly clear, from their earliest Apollo classics (1953’s R&B chart-topper Baby Don’t Do It and the delightfully ribald Laundromat Blues are prime examples) through their prolific heyday on the King label.
Their principal source of material, Lowman Pauling, Jr., unleashed his previously undocumented lead guitar work from 1957 on so lethally that it became a prime component of the Royales’ attack, slashing through their ’57 hit Think and deeply influencing Stax guitar king Steve Cropper’s developing style. The unholy marriage of sanctified and secular never rocked harder than when The “5” Royales were positioned behind a microphone!

Learn more about The 5 Royales
The "5" Royales I'm With You No matter how many sessions they cut for Cincinnati-based... more
Close menu
"The 5 Royales"

No matter how many sessions they cut for Cincinnati-based King Records, The "5" Royales could never remove the glorious gospel feeling from their earthy output.

The quintet from Winston-Salem, North Carolina was enormously successful during their early secular days with New York's Apollo label (their Baby Don't Do It and Help Me Somebody both topped the R&B charts in 1953; the latter's flip Crazy, Crazy, Crazy as well as Too Much Lovin' and I Do all close behind over the course of '53 and '54). But when the Royales switched over to King later in 1954, the hits dried up despite the ongoing presence of church-fired lead Johnny Tanner and the increasingly blistering lead guitar of Lowman Pauling, their primary songwriter.

The quintet finally made it back to the R&B hit parade in 1957 with Tears Of Joy and the romping Think (later revived with a funkier groove by James Brown). Their Dedicated To The One I Love (featuring Johnny's brother, Eugene Tanner, up front) provided a blueprint for The Shirelles' subsequent hit rendition. Jimmy Moore and Obadiah Carter remained staunch in the chorus, as they had since their '51 Apollo debut date when they were still a gospel group, The Royal Sons Quintet.

Although the Royales usually cut at King's Cincy headquarters (or occasionally in New York), their February 3, 1960 session was held in Miami at Criteria Studios. Johnny torched Lowman's intense I'm With You, drenching his lead in sanctified fervor as Pauling's guitar provided a surging underpinning and the Royales chanted hypnotically. The storming flip, Don't Give No More Than You Can Take, and both sides of their King farewell, Why and the group-generated (Something Moves Me) Within My Heart, came permeated in pure holy roller goodness.

From King, the Royales signed with Memphis-based Home of the Blues, where they stayed from 1960 to '62 (the logo licensed some of their masters to Vee-Jay and ABC-Paramount). After a '63 date in Nashville for Todd Records, the quintet remade Baby Don't Do It and I Like It Like That under James Brown's supervision for Smash in '64. Lowman tried to break out on his own with five early '60s 45s for Federal under the name of El Pauling in partnership with pianist Royal Abbit. Pauling died December 26, 1973 in Brooklyn, his mind-boggling axe never gaining him the adulation he deserved. The equally spectacular Johnny Tanner died November 8, 2005. As one of the earliest R&B acts to bravely blend gospel into their attack, The "5" Royales were one of the founding fathers of soul.

A well-fed album with many excellent tracks!

Featuring one of the acknowledged best doo-wop groups, Bear Family presents the rockiest tracks by the "5" Royales. Hailing from Winston-Sa- lem, North Carolina, the group started out singing gospel and later moved into rhythm'n'blues. On this album, which covers the years 1952 to 1962, we get tracks from Apollo, King and Home of the Blues. Guitarist Lowman Pauling was also a source of inspiration for Steve Cropper. Like Clyde McPhatter and Ray Charles, the "5" Royales played a crucial role in combining melismatic gospel singing with rhythm and blues lyrics and instruments to invent soul music. The powerhouse vocal quintet from Winston-Salem, North Carolina started out- ending with spiritual songs, but after signing to New York's Apollo Records in 1951, they went on a secular path and scored their biggest hits in the first half of the '50s on Billboard's rhythm'n'blues chart with songs like "Baby Don't Do It" (#1, 1953), "Help Me Somebody" (#1, 1953), "Crazy, Crazy, Crazy" (#5, 1953), "Too Much Lovin'" (#4, 1953), "I Do" (#6, 1954), "Tears Of Joy" (#9, 1957) and "Think" (#9, 1957). The 32-page booklet features several exquisite color images and the text is compiled by Bill Dahl. A well-fed album with many excellent tracks that I think will go down well with doo-wop fans.
Jan Andersson

A enjoyable fantastic rocking compilation! 5 stars all the way! 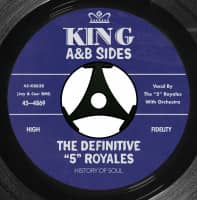 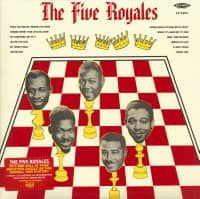 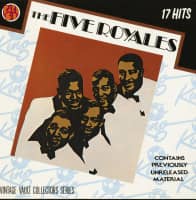