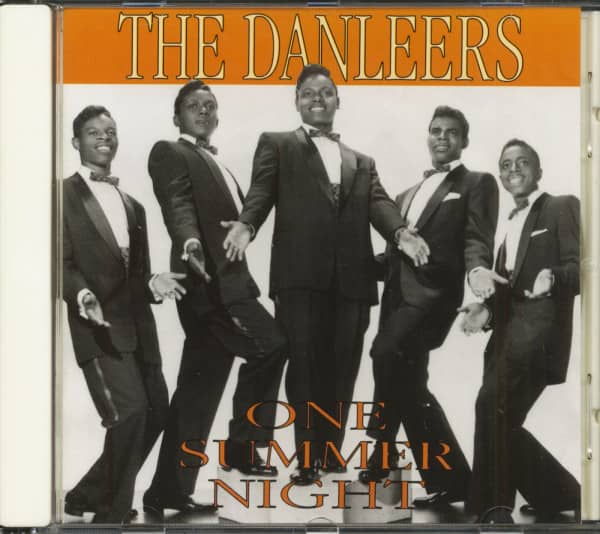 The Danleers: One Summer Night (CD)

Or perhaps you know them as the Dandleers  at least that's the way the label read on their first release on the tiny, Mercury-distributed Amp 3 label. True one-hit wonders, the group scored big on their first attempt  the atmospheric One Summer Night, a strong hit from 1958  and promptly went unheard for the rest of their relatively short career, despite a solid doo wop sound. This 25-track CD reissues their entire career output: four sides for Amp 3 (one unissued); 9 sides for Mercury (3 unissued); 6 sides for Epic (2 unissued), 2 for Everest and four for Smash.

If You Don't Care

The Danleers posted one of 1958's biggest doo-wop hits with their shimmering One Summer Night (it's prominent on that year's 'Street Corner Symphonies' disc). Jimmy Weston's soaring lead tenor sold their manager Danny Webb's composition beautifully. First out on Bill Lasley's Amp 3 logo, it soon attracted the interest of Mercury Records. That summer, the group sat pretty at #4 R&B and #7 pop.

Mercury didn't do much to promote the Brooklyn-based Danleers' encores. I Really Love You b/w My Flaming Heart went nowhere during the summer of '58. Ditto Prelude To Love b/w A Picture Of You late that year and Your Love b/w I Can't Sleep the next March. The first Danleers went their separate ways in mid-'59.

Webb knew Weston's lead tenor was special. He teamed Jimmy with three members of another group he managed that briefly recorded for MGM, The Webtones (like The Danleers, Danny named them after himself). First tenor Louis Williams, baritone Terry Wilson, and bass Frank Clemens were joined by second tenor Doug Ebron, Weston's brother-in-law. Webb got the retooled Danleers a contract with Columbia's Epic imprint, hardly a bastion of rock and roll. The group doesn't seem to have been a high priority there: the A-side of their first single was cut on November 9, 1959, while its flip didn't get done until March 1.

Waxed at Columbia's New York studios with nine strings and French horns on the premises under arranger Chuck Sagle (so were R&B stalwarts Bert Keyes on keys, bassist Doles Dickens, and drummer Sticks Evans), the majestic ballad If You Don't Care was co-penned by Webb and restored Weston to the spotlight. Epic pressed it up with the B-side (I Live) Half A Block From An Angel, but it didn't change The Danleers' luck in March of '60. Epic only gave them one more try with I'll Always Believe In You b/w Little Lover that fall before cutting The Danleers loose.

In 1961, the group turned up with a single on Everest. A pair of '64 releases on Mercury's Smash subsidiary brought them full circle without renewing their hitmaking mojo. Webb didn't give up, producing two mid-'60s Danleers singles for the tiny Le-Mans label. Neither a Weston-penned Baby You've Got It b/w The Truth Hurts (arranged by New York guitarist Leroy Kirkland) nor I'm Sorry b/w This Thing Called Love copped the checkered flag so prominent on Le-Mans' logo.

Review 1
Read, write and discuss reviews... more
Close menu
Customer evaluation for "One Summer Night (CD)"
From: The Doo Wop Dude On: 8 May 2017

Doo Wop from the street corners of Brooklyn

What a nice compilation featuring their atmospheric ballads and some nice uptempo tunes, they have recorded in the late 1950s and early 1960s! And believe me - you'll never get tired of 'One Summer Night', in my opinion one of the greatest vocal group masterpieces ever!

Write an evaluation
Evaluations will be activated after verification.
Weitere Artikel von The Danleers
The Danleers: The Best Of The Danleers (CD) Art-Nr.: CD532732