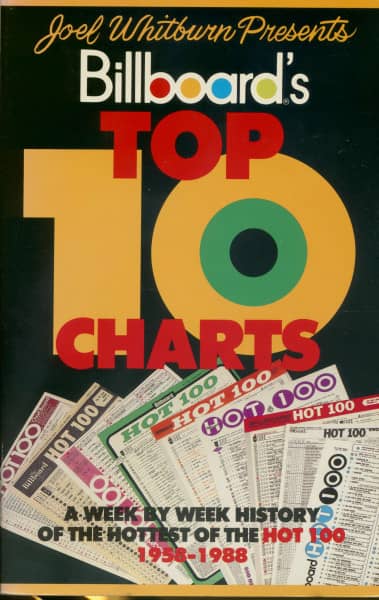 This is the diary of America's musical fancies. The collector's checklist. The trivia enthusiast's wellspring. The nostalgia buff's freeway to the back alleys of memory. The historian's documentation of countless pop music trends.
It is the unedited life story of the upper tenth of the nation's premier and most-quoted popular music chart, Billboard Magazine's Hot 100. For the last 30 years, this survey, based on national sales and airplay, has been a parallel of American popular culture. The upper echelon of the Hot 100 is the marrow of the chart, the ultimate goal of every single fortunate to break into the Hot 100.
To commemorate this minority, each week's Top 10 is reproduced as it was first presented. Chart bullets, current and previous weeks' chart positions, weeks charted, titles, artists, and labels are noted as originally shown. The highest-debuting and fastest-moving singles of each week's entire Hot 100 are also listed. Singles at the peak of their chart career are noted in bold typeface.
So, it is in homage to the Top 10 that the data, from each Hot 100 chart of the past three decades, is duplicated as it was originally published. Read on, you'll find that every page produces a weekly soundtrack to the diary of your life.
JOEL WHITBURN