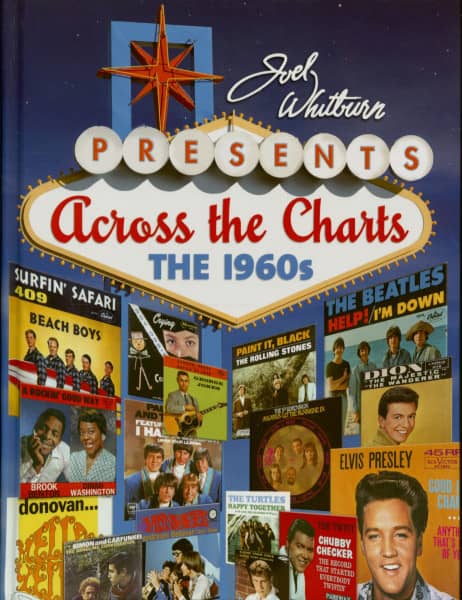 Please inform me as soon as the product is available again.
$71.18 *

Joes Whitburn Presents: Across The Charts - The 1960s

Unlike any book we have ever published, Across The Charts: The 1960s is the complete story of a full ten years of Billboard charted music, and what a decade it was! Throughout the Sixties, music evolved, transformed and crossed over genre lines as in no other decade before. And it's all captured right here - in a single, mammoth, all-encompassing volume!

Across The Charts: The 1960s covers all of the songs that peaked from 1960 through 1969 on Billboard's Hot 100, Country, R&B, Easy Listening (Adult Contemporary) and Bubbling Under singles charts. They are all listed together in one comprehensive artist section, so you can easily see an artist's crossover power and command of all the charts.
One Comprehensive Artist Listing

A single combined alphabetical Artist Section lists, in chronological order for each artist, all of the artist's charted hits that appeared on any or all of the five singles charts. For example, Elvis Presley's charted songs on the Pop, Country, R&B, Easy Listening and Bubbling Under singles charts all appear together chronologically in this one listing, instead of in five separate sections.

Complete chart dataincluding each song's debut date, highest position reached and total number of weeks on the charts is shown for every chart on which a song appeared.

Crossover songs that appeared on multiple charts have chart data from each chart listed.

A picture sleeve photo is shown for certain artists.

Alternate artist names (such as duets) appear under the song title in bold letters.

Article properties: Joes Whitburn Presents: Across The Charts - The 1960s