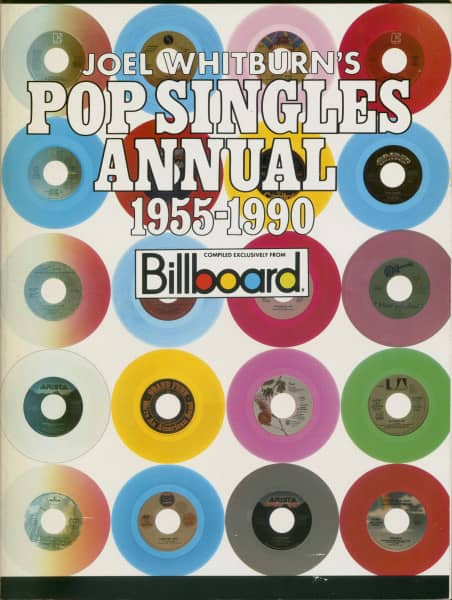 AUTHOR'S NOTE
The 36 years of the rock era, covered in the Pop Singles Annual, span much of the life of the vinyl single. In the early Fifties, the newly introduced vinyl 45 rpm single was competing with the 78 rpm, the established medium of recorded music. I remember how the Motorola hi-fi console in our living room was host to 78s by Eddie Fisher, The Three Suns, Jo Stafford, Frankie Laine, Perry Como and many of the other hot recording stars of the day. The family's collec-tion of 78 rpm platters was something we all listened to and enjoyed. The record industry's campaign for the 45 got a huge boost with the introduction of rock `n' roll into the pop mainstream in the mid-Fifties. No longer did Mom, Dad, and all the kids share the same taste in music. My sister Julie and I, both in our teens, added rock's Elvis Pres-ley, Buddy Holly and The Everly Brothers to our lists of favorite pop artists, and thus made up the rock 'n' roll audience in the Whitburn household.

I took my paper route money and purchased a $30.00 portable RCA record player. For my personal listening enjoyment, I bought the smaller, flexible 45 rpm singles, as opposed to the large, breakable 78s. I can recall sitting in my bedroom, next to my record players' tiny speakers, and playing Duane Eddy's "Cannonball" at least a dozen times in a row, at full volume. The sound was tinny — subwoofers, tweeters and equalizers were not consumer items — and, my records were soon happily worn — a condition temporarily cured by fastening a nickel or a couple of pennies to the tone arm, which really ground the grooves of the record. It didn't matter, the music sounded great to me. I was part of a growing teen population that was electrified by rock. We took our part-time earnings and pumped them into the record industry. The record labels eagerly responded with more vinyl 45s.

Our previously untapped buying power and enthusiasm made pop music syn-onomous with youth music. The vinyl 45 was the vehicle of choice to carry the mushrooming music business. Today, current singles releases on vinyl are extremely difficult to find. Boomboxes, owned by nearly every music-loving teenager, have supplanted the need for vinyl with the need for cas-sette singles. The singles market, in general, has fallen off in recent years. In the first decade and a half of the rock era, artists did not necessarily release tracks off their albums as singles. Many times, a hit song was only available on 45 rpm. Today, anywhere from three to seven tracks are typically released from a single album. With the rising cost of the single, it is more economical to purchase the album and get all current and future pop hits. In homage to the vanishing vinyl single, the cover of this book features a few record collectibles. Displayed on the front are vibrant, colored vinyl singles.

The back cover boasts some of the custom labels that were used only once for a special recording. These are some of the records that caught my eye within the neatly stacked 45s in the mom-and-pop record shop down the street. The record's durable and shiny grooves, surrounded by a paper sleeve, made the music seem immediate and inviting back then. Today's cassette and compact disc singles are convenient; however, the Top 40 racks of plastic do not draw me into the local department store, as the stacks of wax in my hometown record shop did. For me, the vinyl 45 will always be a cherished memento.
JOEL WHITBURN