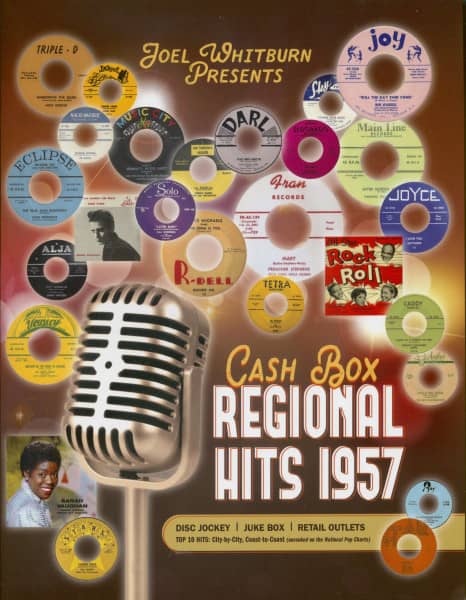 AUTHOR'S NOTE
The treasure hunt continues into 1957! I had so much fun digging though the 1956 Cash Box regional record charts, finding so many long lost buried nuggets of musical gold that I just had to keep up the hunt. To my surprise and delight, starting in early 1957, Cash Box expanded its regional disc jockey coverage from two to three pages! This meant an extra 21 weekly disc jockey Top 10 charts from large, medium and small radio markets across the USA and even a handful from Canada.

1957 was a pivotal year in the expansion of Top 40 radio and the new musical sensation of rock and roll. As the year began, the calypso craze (spearheaded by such artists as Harry Belafonte) was in full bloom. For a few months, the island sound was the hottest thing around. Also in 1957, seemingly every record label was searching for the next Elvis Presley.

As a result, just about any singer with a guitar was given a chance to show their stuff. Many of these rockabilly artists recorded some of the most infectious guitar-based rockers of all-time, many of which are still highly coveted by record collectors to this day (and inspired the vintage photo of me). 1957 also saw the growing popularity of doo-wop vocal groups. Often consisting of young working-class whites and blacks alike, these groups went from the local street corners to the recording studios and some hit it big.

As my work on this book reached its conclusion, I compiled the notes below on some interesting things that caught my attention and made 1957 one of my all-time favorite years for music.