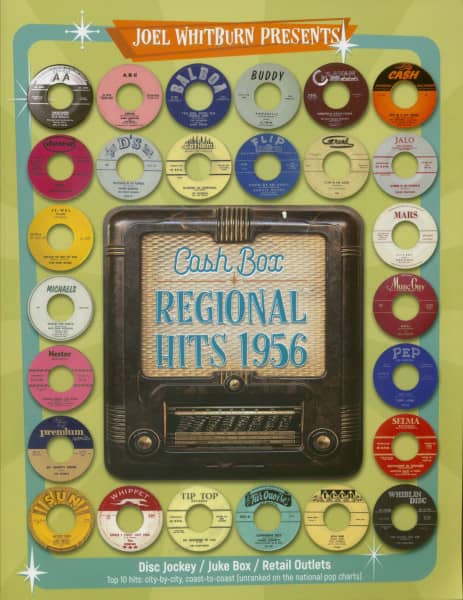 80 pages/Seiten, 28 x 21,6 x 0,5 cm, Paperback, English
Joel & David aboard their vessel
Some things in life remain a mystery — like where is that treasure chest my brother David buried in our backyard on Main Street? The pair of us pirates either needed a better map or perhaps never created one in the haste to hide the booty. The longer it remains hidden within the part of the lawn we did not dig up, the more valuable that simple box of boyhood trinkets becomes.
I embarked on a different kind of treasure hunt last year which yielded thousands of songs, many of which were all but lost to time. It began when I opened a bound volume of Cash Box magazine dated July 5 — September 27, 1958. I had always liked its national "Top 75" pop singles chart, printed on perforated, hard-stock paper — just made for display. But what held my interest that particular day were the "Disk Jockey Regional Record Reports." Filling a page and a half were 63 different Top 10 DJ charts from both large and small markets. Each market's chart displayed its town or city, radio station's call letters, and the name of the disc jockey who submitted the chart.
It was as if a treasure map was unfolding before me, unveiling 45 rpm records on independent labels popular long ago in towns like Shawnee, Oklahoma, or Chadron, Nebraska. I catalouged and investigated every regional hit within that bound 1958 volume and was hooked.
It was time to do some intensive "record research." My employee Brent Olynick hit the road in the quest for more bound volumes, landing upon the Cash Box collection at the College of William & Mary in Virginia.
Perusing through the chart photos Brent brought back, it became clear that the starting point of my research would be 1956. Why 1956? This was the year that the floodgates for rock 'n' roll opened. This music that had been simmering in years past exploded on the music scene, led by Elvis Presley. Doo-wop and rockabilly records that did not appear on any of the national pop singles charts of Cash Box, Billboard or Record World were present on these regional charts.
i searched for all the records that did not go on to make the national pop charts and remained purely regional, appearing on any of the 84 separate Top 10 charts that Cash Box published weekly: 42 DJ, 21 Sales and 21 Juke Box. To my surprise, there were 1,270 of these purely regional hits in 1956!
Finding them was no simple task. I had to sift through 840 titles on each week's regional charts or about 43,680 titles for the whole year. I proofed titles against actual records within my archive. For each title, I documented its regional chart debut date, station call letters, locality and disc jockey name. I discovered that in the few other resources which referenced some these rare 1956 titles, record release dates were off by one to three years. Titles showing values of $40 or more are those that appear in Jerry Osborne's Rockin' Records price guide. Nearly 100 titles within this book, all on small, independent record labels, could not be found in any price guide or any other source, suggesting extreme rarity and exceptional worth.
How exciting to uncover or rediscover these local gems — listening to old "new" songs and beholding the unique label designs. It was only fitting to produce this book in full color.