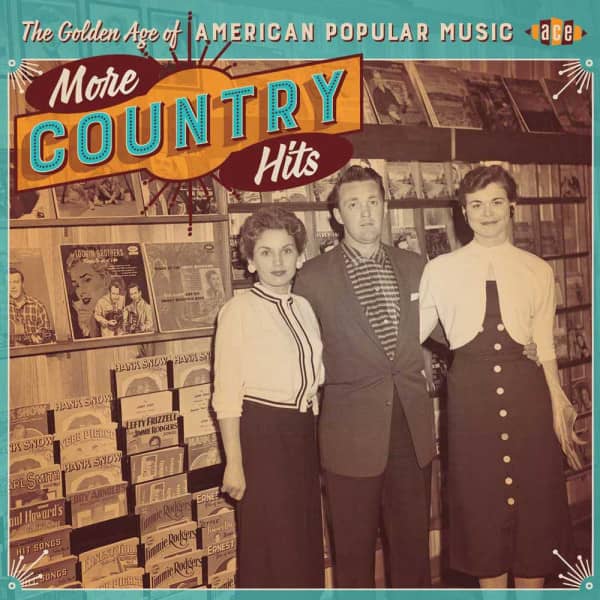 (Ace Records) 28 tracks 1956-1963 with 24 page booklet. Classic country music that breached the American pop charts.
-
The 'Golden Age' series continues to be among our best selling and most highly respected releases. After a short hiatus, we’re pleased to announce this new volume featuring 28 country recordings that made the Billboard Hot 100 between 1955 and 1963. As 'More Country Hits' is in the 'Golden Age Of American Popular Music' series, the content is more melodic overall than a 'Golden Age Of American Rock’n’Roll' edition might be. Nevertheless, there’s a generous helping of up-tempo hillbilly and borderline rockabilly among the straight-ahead country to give listeners a bit of light and shade. As usual, the CD comes with a generously illustrated and copiously annotated booklet.

The tracks transport us to a time when State Fairs were more likely to be on a country performer’s itinerary than stadiums, and superstardom meant you stayed for an extra hour or two after your show to sign autographs, rather than successfully market your own fragrance range. A promotional campaign might have meant a solitary trade ad in the back of Billboard, while radio airplay was the main way of getting your music heard, rather than streaming. These singles became hits because they sold in their thousands, hundreds of thousands, and occasionally millions. That’s what it took to get a record into the national charts in the ultra-competitive 50s and 60s.

Just about every big-selling country artist of the era is included. We’ve tried not to always go for an obvious hit, but there’s music here that will be remembered fondly by anyone who was around when these were new records. Many featured tracks have since come to be regarded as genre classics. If you can’t remember Ferlin Husky’s ‘The Waltz You Saved For Me’ too clearly, tracks such as Marty Robbins’ original of ‘Singing The Blues’, Johnny Horton’s ‘North To Alaska’ or Jim Reeves’ groundbreaking ‘Four Walls’ will surely not have slipped your mind.