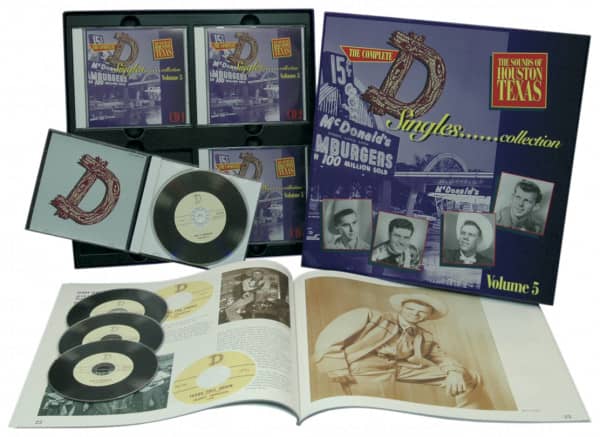 'The Complete D Singles', Volume Five, continues Bear Family's chronological reissue of every single issued on Pappy Daily's famed, Houston-based D Records, picking up where Volume Four left off with D 1214, issued at the beginning of autumn, 1961, and tracing the label's path through the end of 1964.

This set finds the label in transition: after almost four years of a steady flow of releases, the pace of D singles began to slow in the last months of 1961, and the frequency of releases declined to a trickle by mid-1962. Still, there was compelling and uncompromising country music coming from the label, and this set includes typically tough singles by such diverse artists as Jim Eanes, Merl Lindsay, Billy Parker, Eddie Noack, and early recordings by Al Dean, best known for his hardy perennial 'Cotton-Eyed Joe' from a few years later.