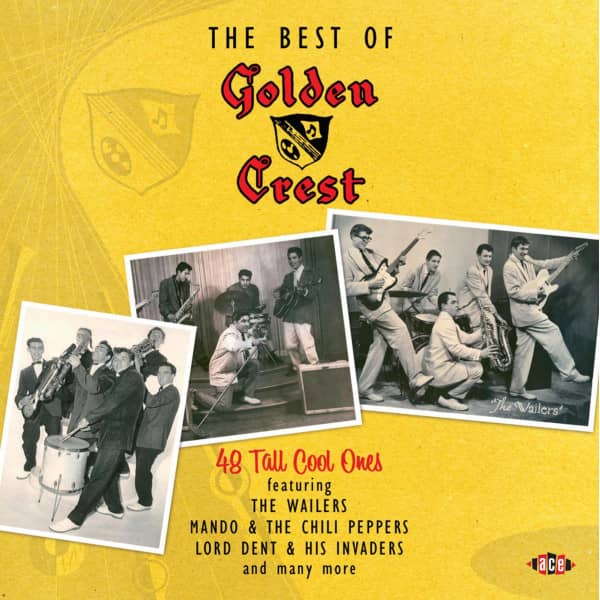 Ace Records’ link with Golden Crest dates back to 1993. That was when I travelled to picturesque Cold Spring Harbor, Long Island, to discuss a licensing deal specifically for the Wailers’ enduring hit instrumental, ‘Tall Cool One’, which duly appeared on “The Golden Age of American Rock’n’Roll, Vol 6” (CDCHD 650). Label-founder Clark Galehouse had died 10 years earlier, so his daughter Shelley came along with her trusted adviser – none other than the great but notorious Hy Weiss of Old Town Records. I couldn’t believe my “luck” in coming up against one of the sharpest and most conniving minds in the business. Eventually I ended up with two contracts: one for Ace; the other in marriage to Shelley.

Through the years Ace has released the “The Fabulous Wailers” (CDCHD 675, a classic and still a solid seller); “On The Road With Rock’n’Roll” by Mando and the Chili Peppers and “Golden Crest Instrumentals” (now deleted); plus quite a few individual tracks. Other reissue labels have licensed Golden Crest masters, from rock’n’roll, rocking instrumentals, doo wop and teen to classical.

Now, at last, we have this first-ever “The Best Of Golden Crest” collection, which draws on singles aimed primarily at the Top 100 charts in the peak rock’n’roll years from the parent label and its subsidiaries Shelley, DeWitt and Yorkshire. Out of the 48 tracks here, no less than 35 are new to Ace CD with almost half new to CD anywhere.

By virtue of its location in Huntington Station, NY, Golden Crest was well placed to trawl talent from Long Island (including Queens and Brooklyn), also New York and New Jersey. But the label made its mark when ‘Tall Cool One’ by the Wailers, from the Northwest area, hit the Top 50 charts on Billboard and Cash Box in 1959 and then again in 1964. As a result of the Wailers’ success, Galehouse tapped into other Northwest acts Clayton Watson (Lord Dent), the Mad Plaids, the Chessmen and Lola Sugia. A further wellspring of satisfying recordings in an R&B vein (but with no hits) emanated from record lady Lillian Claiborne of Washington, D.C.

So, what new-to-CD tracks are there to savour? From the Claiborne stable, try the three New Orleans R&B-influenced Calvin Ruffins and the spot-on Little Willie John soundalike Johnny Stewart with ‘Come On And Love Me’; the attitudinal ‘Bug Out’ by the Seven Teens and more teen pop from the Three Graces and the Montells; ‘Why Did You Tell Me?’ by anguished R&B’er Cartrell Dickson; the superior soul of ‘Girl’ by the Bluestyle with Carl Vanterpool; singles by jazz masters Coleman Hawkins and Carmen Leggio; the splendid bonus track, ‘New York City Blues’, by Larry Dale & his Houserockers (with Bob Gaddy and Jimmy Spruill), written by UK author/Juke Blues writer Dave Williams; and, of course, the three “new” Wailers cuts from their very first 1958 session.

To round off this double CD, there is a highly attractive booklet detailing the label’s history and featuring its innovative picture 45s and picture sleeves. For all the diversity of music genres released, Golden Crest Records was still part of the marvellous cartel of independent labels that contributed so much to the rock’n’roll era. And it shows in these 48 tall cool ones.