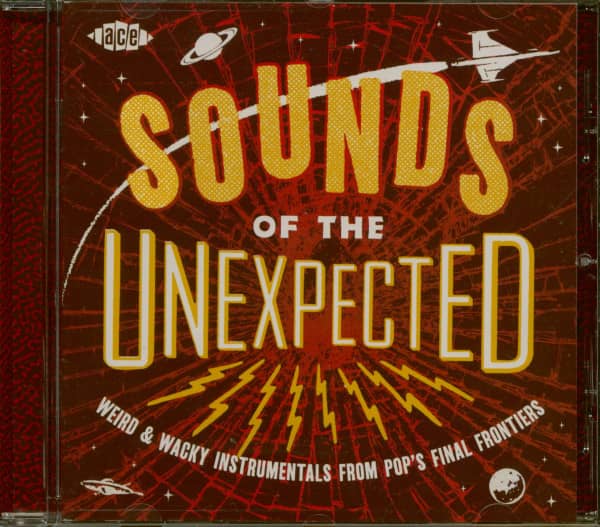 Various: Sounds Of The Unexpected (CD)

(2017/ACE) 24 tracks (59:10) with a stunning 24 page booklet. A killer album of genius, weird and wacky intros, compiled by Vicki Vox.
-
• Sadly, our good friend and colleague Vicki Fox died in 2016. As a teenager she’d worked at Rock On before becoming involved with Ace, where her skill at photographic restoration enhanced so many of our releases. A gifted artist and a passionate music fan, Vicki’s joie de vivre and live-wire personality enriched everything she undertook.
• Vicki also compiled several releases herself. Her love of cats was immortalised in “Feline Groovy”, a CD which launched a thousand T-shirts. This was followed by “All Aboard”, a highly eclectic collection of train songs.
• No less eclectic, Vicki’s latest, and last, compilation draws upon another of her passions – the wild and wacky instrumental. Casting her net wide from MOR to Reggae, Rockabilly to R&B “Sounds Unexpected” celebrates the unusual, the groovy and the downright bonkers with 24 of her favourite cuts. With recordings by André Brasseur, the Tornados, Travis Wammack, Martin Denny and the Upsetters, the result is never less than intriguing and entertaining.
• Echoing her own inclusive nature, two dozen of Vicki’s friends and work colleagues contribute to the sleeve notes.