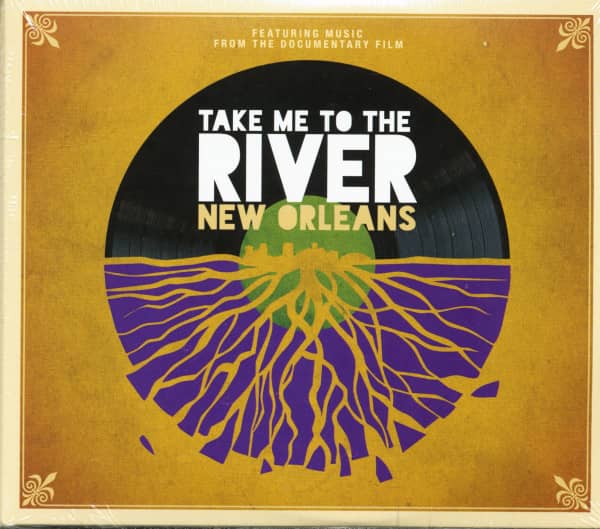 Various: Take Me To The River - New Orleans - Soundtrack (2-CD)

The musical DNA of New Orleans is the subject of the new documentary Take Me To The River - New Orleans. The film's soundtrack, from director Martin Shore, features new contributions from a vibrant mix of NOLA talent including the Neville Brothers, Dr. John, Snoop Dogg, Jon Batiste and many others. On Friday, the filmmakers unveiled the soundtrack featuring collaborations from Dee-1, Mannie Fresh, Big Freedia and Galactic: Act Like You Know.

Following Shore's 2014 documentary Take Me To The River, which portrays the music of Memphis, the director now turns his camera to the Crescent City. The documentary will explore the vibrant music history, heritage, culture and influence of New Orleans that blend together to create an intoxicating gumbo. The soundtrack, out April 1 via Petaluma Records, features new material from PJ Morton, G-Eazy, Christian Scott aTunde Adjuah, Dumpstaphunk, Dirty Dozen Brass Band, William Bell, Ani DiFranco, Donald Harrison, Ledisi and many others.

The Take Me To The River - New Orleans soundtrack also gives a special place to NOLA legends The Neville Brothers and the late Dr. John. The extensive 36 track collection features new recordings from one of The Neville Brothers' final performances and one of Dr. John's final studio sessions.
The deluxe soundtrack release is a true collaboration that celebrates the melting pot that is NOLA's musical DNA. From traditional jazz to second line, rhythm and blues to hip hop and rap, funk/soul to rock and roll, the producers of this unique and unprecedented project have brought together legendary musicians with the rising stars of the 21st century to create a historic musical collaboration unlike any before. The album features brand new recordings of recent performances by the Neville Brothers and one of the last studio sessions with Dr. John, as well as all-new collaborative performances with a number of great New Orleans artists. The music of New Orleans is a globally unique collaboration, and Take Me To The River: New Orleans gives viewers an insightful historical perspective on how global influences have shaped and continue to shape the music of this extraordinary city.

The Take Me To The River - All Stars Band will perform May 5 at the House of Blues in New Orleans, kicking off the second weekend of the New Orleans Jazz & Heritage Festival. The ensemble features North Mississippi Allstars brothers Luther and Cody Dickinson, Galactic bassist Robert Mercurio and Joe Ashlar, known for his work with Dr. John. The Dirty Dozen Brass Band will perform as the evening's special guest, and will also feature Ivan Neville, George Porter Jr, Ian Neville, Big Chief Monk Boudreaux, Anjelika "Jelly" Joseph and Walter "Wolfman" Washington. A Take Me To The River - All Stars tour will follow, featuring Ivan Neville, Ian Neville, Jon Cleary, Robert Mercurio, Terence Higgins and others in various cities around the country in May.

This product will be released at 14 October 2022