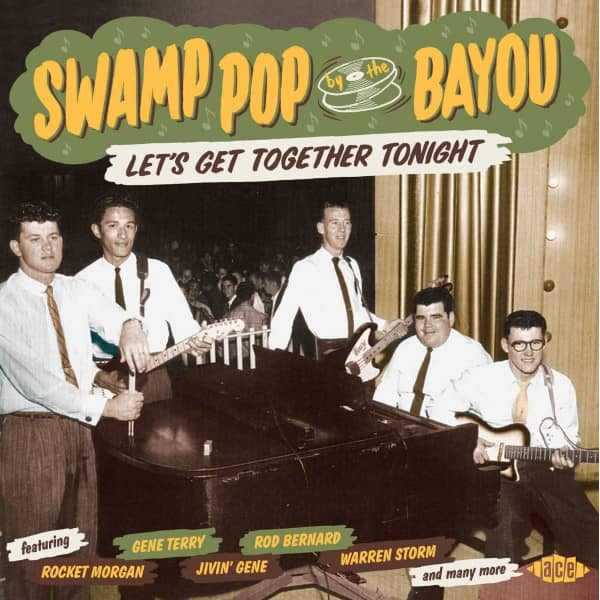 Various: Swamp Pop By The Bayou - Let's Get Together (CD)

(2017/Ace) 28 tracks with 16 page booklet.
-
There are three music genres native to the South Louisiana/SE Texas area: Cajun, zydeco and swamp pop. Instantly recognisable, this is music that resonates with the steamy heat of the swamps and bayous, and with the spicy food and goodtime feel of the people and the area.
-
This is the third volume in our “By The Bayou” series to feature swamp pop – a term that did not exist when the tracks on the CD were recorded. Ville Platte, the home of Floyd Soileau’s stable of labels, now proudly calls itself the Swamp Pop Capital Of The World.
-
Ian Saddler’s latest compilation contains the tried-and-tested mixture of hits and rarities, plus three previously unreleased nuggets. The CD features a young Johnny Winter, an uncle of Dolly Parton and some rare early James Burton guitar picking

The buckle-polishers and skirt-swirlers are back! Presenting 28 rare goodies from Louisiana and South East Texas.
The variant of rock’n’roll that emanated from the Gulf Coast of South Louisiana and South East Texas in the 1950s-60s is as evocative of the area as chicken gumbo, crawfish étouffée and red beans and rice. The youthful Cajuns of the period threw themselves into r’n’r like teenagers across the globe, but had additional influences, not just the hillbilly and blues that created rockabilly, but the ethnic music of their parents and, most telling, the R&B sounds carried over the airwaves from New Orleans. In time, largely through the writings of Englishman John Broven, the music they created would become known as swamp pop, and the town of Ville Platte would claim the title of Swamp Pop Capital Of The World, host a Hall Of Fame dedicated to the genre and, each Mardi Gras, hold a reunion of swamp pop performers which culminates in a concert at the town’s civic centre.
This third journey into swamp pop territory includes giants of the genre Jivin’ Gene, Rod Bernard and Warren Storm, plus artists such as Gene Terry, Vince Anthony and Doug Ardoin who have knocked on fame’s door without quite breaking through, but still achieved cult status. The collection also features early recordings by blues legend Johnny Winter (under the alias Texas Guitar Slim) and rockabilly icon Rocket Morgan, who both demonstrate a gift for this regional music. There are 10 tracks from J.D. Miller’s studio in Crowley, six from Eddie Shuler’s Goldband label in Lake Charles, three from Jake Graffagnino’s Carl imprint in Opelousas and offerings from Floyd Soileau’s operation in Ville Platte, Hilton McCrory’s set-up in Morgan City and Mira Smith’s in Shreveport. From across the state line inSE Texas, we have dipped into the vaults of Huey Meaux, plus others from the studios of Pappy Daily, Diamond Jim Wheeler and Bill Hall.
The culture of South Louisiana is steeped in backbreaking toil, followed by any excuse for a party. Every small town has its own festival, generally based on the local food. The music of the area is designed for dancing and forms a part of the people’s DNA. The same can be said for those just across the Sabine River inSE Texas, who share a cultural background, including the love of music and a good time. So turn the clock back 50+ years, transport yourself to the steamy heat of a South Louisiana night and let the music of this 17th release in the “By The Bayou” series wash over you.
Ian Saddler

Article properties: Various: Swamp Pop By The Bayou - Let's Get Together (CD)

Review 2
Read, write and discuss reviews... more
Close menu
Customer evaluation for "Swamp Pop By The Bayou - Let's Get Together (CD)"
From: kiener wilfried On: 2 Jun 2017

number 16! and not one bad volume