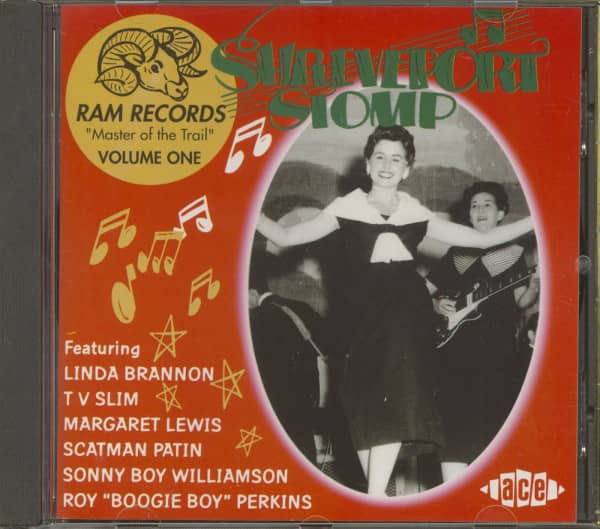 Ram Records was the creation of the late Mira Smith. A multi-talented musician, studio engineer and songwriter, Mira made many fine recordings both of blues and hillbilly artists. Most of them came from her home town of Shreveport, Louisiana but, occasionally, she would record musicians and singers from places further afield. Many of the performances she recorded have remained unissued until today, not because of any deficiency in the recordings or performances, many of which are very fine indeed, simply because Mira worked on an indie label shoestring and had insufficient capital to promote more than a handful of singles a year.

An awful lot of good music just stayed in the vaults. With her limited budget, Mira recorded such talent as bluesman Oscar Wills, better known as TV Slim, and his Flat Foot Sam and a young rock'n'roll star Linda Brannon, whose band included a very young guitarist James Burton (later to record and tour with Elvis in the late 60s and 70s).

Linda later married country supersession player Jerry Kennedy, who also features on some of the Ram recording sessions. White blues piano player Roy 'Boogie Boy' Perkins was another find - his Drop Top (here in a previously unreleased first take) was Billboard's Pick Of The Week in February 1958 while his rocking Ba-Da gets a general release for the first time (it was only previously available in the 70s as a hard-to-find mail-order item).

Sonny Boy Williamson is here with Mailman, Mailman, though this Sonny Boy is neither No.1 nor No.2 but a guy named Jeff Williamson, a tall, thin man with golden hair who found his disc strangely credited to Sonny Boy Williamson. Capturing the melting pot of sounds that were transforming the South of the 50s and early 60s, the music on Ram features the blues as they met country music, rockabilly and western swing and they collided with R&B and cajun as it started to mutate into swamp pop. Heady music from vintage times and volume one is only the beginning!