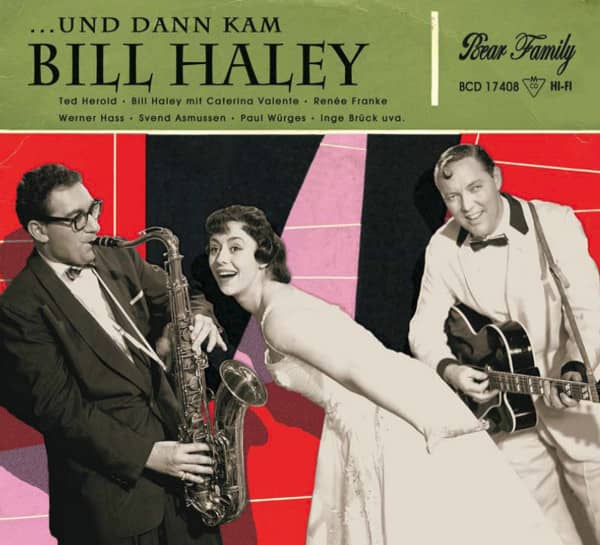 1-CD Digipak (4-sided) with 40-sided booklet, 25 single titles. Total playing time approx. 65 minutes.
Bill Haley, the'first boss of rock music' (Ted Herold) alongside Caterina Valente, Max Greger, the Gisha Brothers, Renée Franke and many others...
Bill Haley's music has been tried and tested by musicians - more or less successfully.
From hair-raising Germanisations and parodies to successful adaptations - shaped by the spirit of the Adenauer era!
A 40-page booklet with numerous illustrations and curious finds shows the fascinating background to these rarities.
What stormed the Atlantic 60 years ago hit the German pop scene like a comet. Already in February 1955 the Hamburg Polydor presented the singles Shake, Rattle And Roll and Rock Around The Clock with a photo of Bill Haley and His Comets in a brochure entitled'International Dance Music and Jazz'. At that time hardly anyone in Germany had heard of Elvis Presley. The embodiment of rock'n' roll was then Bill Haley, and in Germany he was to remain the ambassador of this music forever.
But it was difficult in the fifties to integrate the new music from America - so the orchestra Kurt Edelhagen was engaged as support for the first Haley concerts in Germany! And a little later the GDR media condemned Haley as'rock'n' roll gangster' and his music as'American after-culture'.
It was part of the defense strategy that this new music was literally embraced and unambiguously played so that one would not be overwhelmed by it. In the best case adaptation at that time meant imitation; congeniality or even soul mates seemed to be outside every possibility. This collection demonstrates the multifaceted nature of these - more or less promising - strategies: passionate tributes by Ted Herold and Paul Würges stand alongside cabaret parodies and dance orchestras who want to be part of it as free riders, alongside hopeful newcomers and ill-advised veterans. Bill Haley himself also has his say: with two rarities from the German Atze Brauner film production'Hier bin ich - hier bleib ich'.
Whoever wants to understand the zeitgeist of the Adenauer years cannot ignore Bill Haley, but above all not the reaction to the'rock'n' roll father' ('picture'), the outraged rejection of some and the stormy enthusiasm of others.

Record Collector 11/15 "There's also a song about Bill Haley, recorded by Ted Herold, which might even surprise a good few Haley collectors."