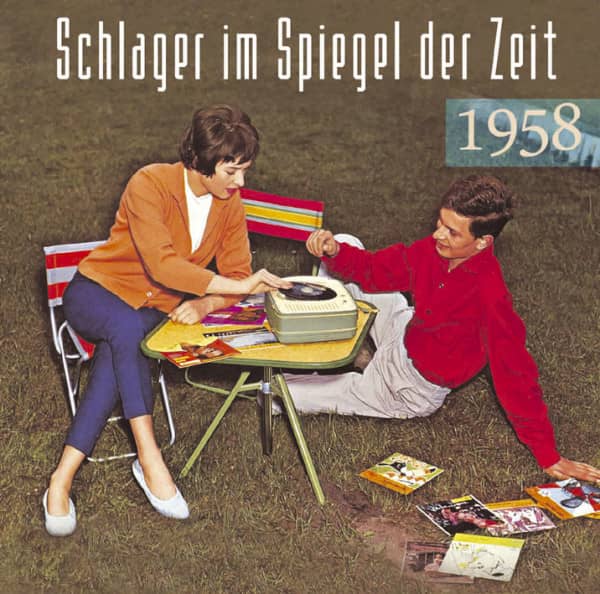 Boredom from the radio
Bravo', the central organ of the 50s youth, brought a picture of the German actor Joachim Hansen on the title at Easter 1958. The back showed a colored photo of the American pop singer Pat Boone with the headline "Who's going to be the king of the music? The accompanying article addressed a problem that moved both the magazine's readers and the music industry: the broadcasting landscape at the time. Radio Luxembourg had just started broadcasting for West Germany and, as 'Bravo' put it, brought "a cocktail of notes. The Luxembourgers mix soft hits of the Torriani type with the popular local music production, decorate the whole thing with a little Lehár and Mozart and pepper with a pinch of "Pat Boone". As a contrast, the magazine named the AFN stations in Germany and their effects: "New vocal groups are appearing all the time - and their hot songs make the juke boxes glow white." German stations, on the other hand, were yawning boredom. To the great frustration of the 'Bravo' community, the "programme makers were almost as unworldly as the ancient Romans". The BRAVO music box in the same issue reflects this situation - with a clear focus on German hits.

The dilemma in which the music industry was stuck at the time: taste shifted more and more towards pop music for young people, but trade and radio lagged behind. In addition, the American influence, which had already begun at the end of the 1940s, now came increasingly to the fore. The popular magazine 'Film und Frau' therefore pleaded: "You shouldn't put today's young people at a disadvantage if they love the hard beat more than the sweet tearjerker. If your son doesn't give a damn about heath, foresters or Hawaii today - that's fine! Anyone who wants to make it up in the Schlager business today will be able to enjoy the big foreign successes, either in the original version or with German text. The US hit parade is now having an effect all the way to the last record dealer in Posemuckel. For months there have only been one or two German pop compositions among the ten German bestsellers." And also the 'vending machine market' did not want to miss the trend. Under the headline 'Teenager - an important factor in the record business' he took up the lance for imported music: "The new rock 'n' roll music has almost exclusively teenagers as followers... The greater the number of music-loving, record-buying youth - the more interesting for the record industry and jukebox."

Soundtracks for the record market
The American and English soldier broadcasters and the record jockey Chris Howland had done a great job for years and prepared the ground for the taste revolution. The result could be heard. And even though the German radio broadcasts slept through the development, the new times were still noticeable in the jukeboxes. There has not been a single month without an American title among the top hits. And if the original was not listed, the operators had at least written a German cover version on their postcards to the 'Automaten-Markt'. One of the most played plays was 1958 The River Kwai March from the movie 'Die Brücke am Kwai'. In the 'vending machine market' the great importance of film music for the operators has now been discussed. The editorial staff created a new section 'Film hits for your box' to support it. Because films with their soundtracks still had a positive impact on the record market. For example, the Nick Nack song from the 6th Bliss Hostel. The midnight blues was the musical highlight of the student drama 'Immer wenn der Tag beginnt'. And also Caterina Valente contributed film music again: Play for me again, Habanero. Title of the strip: '.... and in the evening to the Scala'. Chansonnier Eddie Constantine distinguished himself as an actor in 'Hoppla, now comes Eddie', and Freddy Quinn appeared in 'Heimatlos'.

The film 'Nasser Asphalt' with Horst Buchholz and Maria Perschy, a film about the role of the press and the treatment of the war years, was more time-critical. Dealing with the past also came to West German cinemas with 'Wir Wunderkinder': As a journalist, Hansjörg Felmy took a look at careerists who had secured their place in the sun both during the Nazi era and during the economic miracle period. The present was the subject of Rolf Thiele's 'Das Mädchen Rosemarie' - about the Nitribitt murder case - and Wolfgang Staudte's film 'Madeleine und der Legionär' (Madeleine and the Legionnaire), which took up the horror of the Battle of Algiers: German legionnaires - among them Joachim Hansen in the leading role - flee the Algerian war and meet the French Madeleine (Hildegard Knef) in the desert. Freddy Quinn's The Legionnaire was a perfect fit for time. The successful boy from St. Pauli has now been consistently built up as a star for better marketing in a number of music films.

Youth speaks out
That had already worked out excellently in the USA with Elvis Presley. But his 'Loving You' ('gold from a hot throat') was rejected by the local film critics. Klaus Hebecker from the magazine 'Star Revue' tore the leading actor apart and found himself unexpectedly in the middle of a hot controversy. The paper was flooded with letters from Elvis fans and turned into a discussion topic: Who's the best - Elvis Presley, Pat Boone or Vico Torriani? Headline: 'Loved by youth, acclaimed, booed, reviled, idolized. Three singers stand in the crossfire of opinions. Each of them has his own audience.' The reaction wasn't long in coming. The theme polarized so much that a well-balanced transcription already had a rare character: "We love racy songs like those of Elvis, but we also enjoy listening to Vico Torriani's hits." The editors got a foretaste of the irreconcilable character of the conflict between Peter Kraus and Ted Herold fans that broke out next year.

Obviously, the media provoked each other and the young people reacted. However, there were signs of social change. The sociologist Helmut Schelsky, who noted the emergence of a 'skeptical generation', became a pioneer. So far, the adult world has had the sovereignty of opinion in the country. Now the young generation articulated itself, which did not want to think and act simply further in the given paths of their parents. For the first time after the war, their views received a - albeit not always benevolent - public. Their topics also increasingly moved from the periphery to the centre of interest. The magazine series and reports about James Dean had only been the beginning. Elvis Presley's arrival in Bremerhaven did not only fascinate 'Bravo' and the 'Star Revue'. Already in 1956 'Der Spiegel' had dedicated a cover story to 'Rock 'n' Roll-Singer'. The press generally got into the 'Hipwackler' and the 'Heulboje'. After all, the spontaneous gangs of people in the streets of the big cities after the Bill Haley film 'Außer Rand und Band' must also be regarded as rallies of opinion. And the different nature of the 'Teenager' and 'Twens' train really broke when Haley toured the Federal Republic of Germany in October. That smelled like rebellion. There was no uniform opinion in the youth of the country at that time, but it made itself heard.

Bluejeans and Hula Hoop
The entertainment industry hoped the cup would pass soon. The end of the shellac record did not mean that the obsolete format also meant that old sounds were abandoned at the same time. The new stereo technology was initially used in proven applications such as Mitch-Miller music. The Polydor recorded once again Malaguena and The Breeze And I in stereo with Caterina Valente. The singer herself was open to the new sound: Bill Haley and the Comets were quickly recruited for the local hit market and integrated into the Valente film 'Hier bin ich - hier bleib ich'. Bill intoned Vive le Rock 'n' Roll in it. A year later Louis Armstrong, who appeared in front of the camera with Marika Rökk for 'Die Nacht vor der Premiere' and sang in duet with little Gabriele in 'La Paloma', was treated similarly. His portrait was even used to advertise the Rolleiflex camera. You couldn't win Elvis for such escapades. At the Teldec they even left him out on the 'Klingende Post' advertising boards, with one exception, and instead of Billy Vaughn (with the giant hit Sail Along Silvery Moon) and Vera Lynn (with the giant flop Bon Giorno) they added him to the program. The harmless was booming.