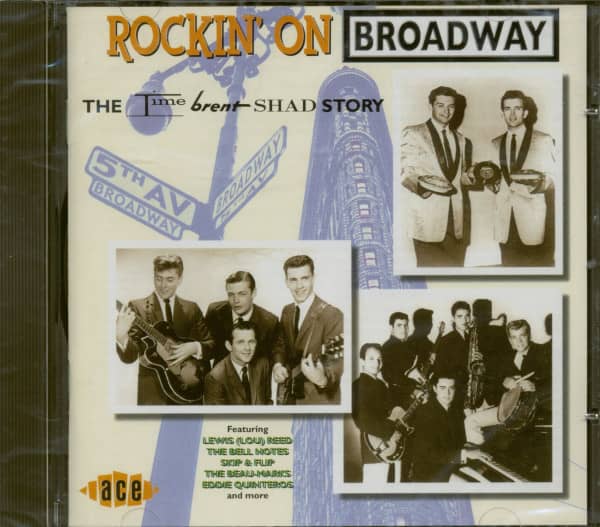 The late Bob Shad began producing jazz and blues for long-forgotten independent labels in the late 40s then spent seven years with Mercury where he supervised countless jazz, blues and pop dates by such notables as Dinah Washington, Junior Wells, the Diamonds, the Platters, Screaming Jay Hawkins and Conway Twitty - in the days before It's Only Make Believe.

Shad was approaching 40 when he resigned from Mercury and went into business for himself, forming three labels - Time, Brent and Shad - in quick succession. By the spring of 1959, Shad had his first major hit with I've Had It by the Bell Notes (on Time) and never looked back. He consolidated with further hits by Skip and Flip, a pop-rock duo comprising Clyde Battin (who later joined the Byrds) and Gary Paxton who broke away from Skip and Flip in mid-career to record the million-selling Alley-Oop (as the Hollywood Argyles) for another label.

Other acts who scored on Time-Brent-Shad during this period were the Genies (Who's That Knocking), the Knockouts (Darling Lorraine) and the Beau-Marks (Clap Your Hands), not to mention rockers such as Eddie Quinteros and Wayne Worley who registered strongly with, respectively, Come Dance With Me and Red Headed Woman. In 1962, Brent made the charts with Bertha Tillman's soulful Oh My Angel while Time released the treasured original version of Devil In His Heart by the Donays, a song the Beatles later popularised as Devil In Her Heart.

Bob Shad was very open-minded. A sizeable proportion of releases on Time, Brent and Shad were purchased from indie producers or smaller labels and the three logos essentially functioned as trademarks for most forms of popular music including rockabilly, doo-wop, teen ballads, soul, instrumentals and, later, hard rock (Shad was the first to record both Ted Nugent and Janis Joplin).

Complimenting our earlier Shad anthology, Wop Ding A Ling (CDCHD 639) which concentrated on vocal groups, Rockin' On Broadway brings together the best of the rock'n'roll and pop releases (including all the hits) in a seamless amalgam. Most notably, it contains Lou Reed's earliest commercial recordings with the Jades in 1958, as well as two intriguing solo sides dating from 1962, issued here for the first time.