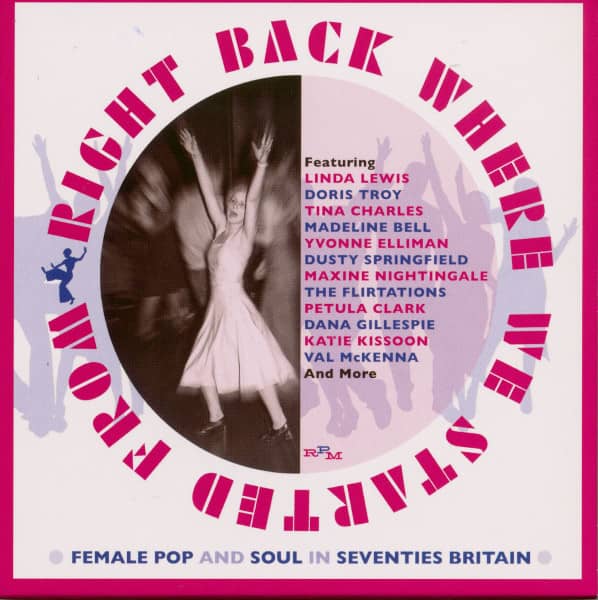 Various: Right Back Where We Started From - Female Pop And Soul In Seventies Britain (3-CD)

(RPM Records) 77 tracks
Back in 1975, Maxine Nightingale became an overnight sensation in the UK when her latest single, ‘Right Back Where We Started From’, stormed into the Top 10. Thereafter, the track’s catchy appeal spread like wildfire across the globe, topping the charts in Canada and the US and was a massive hit in most other countries.

“Right Back Where We Started From” reflected a style of UK pop/soul, inspired by the Northern Soul scene in the North of England and revival of that classic 60s Motown sound. This 3-CD collection, the last to be released on legendary reissue label RPM, takes that classic hit as the catalyst to document a decade’s worth of British pop and soul from female singers.

Picking up where RPM’s “60s Girls” collection from 2017, Am I Dreaming?, left off, this 77-track collection spans the entire decade of the 1970s, with a mix of classics and obscurities, household names and total unknowns, chart hits and bona fide collectables.

Some tracks, such as Disc 3 opener ‘Fever’, a cover of the Peggy Lee classic by Margie Miller, are now £100+ rarities in collector’s circles. Also included are numerous tracks new to CD on independent labels such as Chapter One, Route and Santa Ponsa.

Article properties: Various: Right Back Where We Started From - Female Pop And Soul In Seventies Britain (3-CD)

This product will be released at 30 November 2020

This product will be released at 30 November 2020

$18.41
Right Back Where We Started From - Female Pop And Soul In Seventies Britain (3-CD)