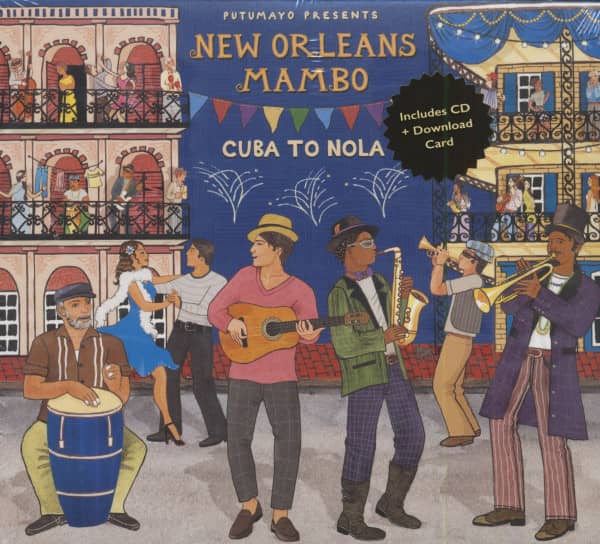 (Putumayo) 10 tracks - digipack
Across the Gulf of Mexico it is 1000 kilometers from New Orleans to Cuba.
Historically and musically, however, for hundreds of years there has been much more connecting than separating elements in this connection.

Pieces of music spiced with Latin ingredients were commonplace in 19th century New Orleans, and at the turn of the 20th century Cuban rhythms also appeared in early New Orleans jazz.
From W. C. Handy to Louis Armstrong to the incredibly popular mambo adaptations of the 1950s, Caribbean influence stretches from the far south of the USA.
With this great collection, Putumayo shows us how alive this musical gumbo between Malecón and Big Easy still is today.

The Texan drummer Poncho Sanchez introduces us to his soul-soaked Latin Jazz, Dr. John hammers Cuban riffs into his piano.
Los Po-Boy-Citos and The Iguanas welcome the Boogaloo to New Orleans, while the Salsa with the Combo Otra drops anchor in Crescent City.
The Wild Magnolias present the culture of the Mardi Gras Indians, while the New Orleans Heartbreakers prove that Germans also indulge in the culture of the Big Easy.
Gipsy and tango sounds weave in Zazou City, and the Neville Brothers celebrate fraternization with the Caribbean under the "Yellow Moon". Finally, the famous Preservation Hall Jazz Band has Creole in its luggage.