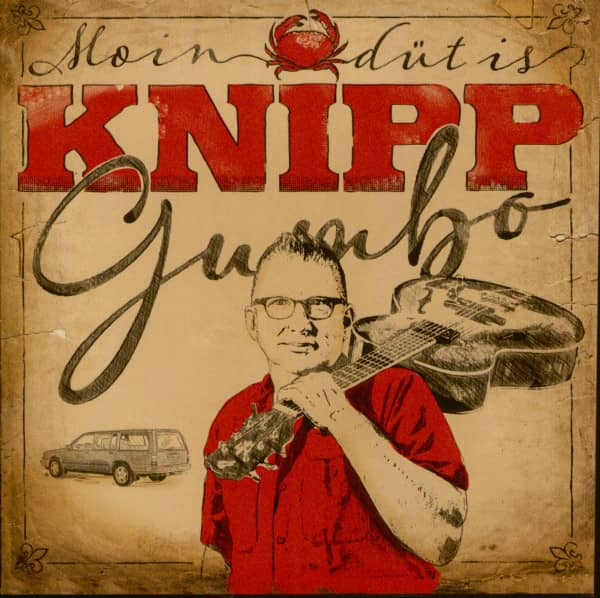 (Elbtonal) 12 tracks (35:17)
Knipp Gumbo - that's an artificial name made up of the Bremen dish "Knipp" and the US Southern stew "Gumbo". The name says it all, because musically there is a hot mixture of rock'n'roll and related styles with Low German (and two High German) lyrics. So to speak, the best of two worlds is mixed together.

In addition to a few selected, beautiful cover versions, Knipp Gumbo offers mainly original compositions whose lyrics cover a wide range of topics, but also moods. This is not always as funny as it might seem at first hearing. So if you want more than simple good mood music, you can get that from Knipp Gumbo. If you don't want more than just good-mood music, just let the lyrics pass you by, as you usually do with English lyrics.

Behind Knipp Gumbo is Bremen-based multi-instrumentalist and composer/lyricist Lars Köster, who has had success as a drummer and songwriter for Die Mimmi's and Velvetone, among others.
As Knipp Gumbo, Köster has played several hundred concerts in recent years, both alone and with bands, and is loved far beyond the Low German scene. Along with a few others, he is definitely partly responsible for not only preserving the tradition of the Low German language, but also for bringing it out of an ageing environment. If one wants to find new blood for traditional languages, one must not close oneself off to modernity.

Knipp Gumbo knows how to combine tradition and modernity with humour and a gift for observation, with musical verve and depth of content and without blinkers. This makes both his concerts and his debut album "Moin, düt is Knipp Gumbo" something great and special. May the artist and his art receive much attention and enthusiasm.
It would be the right thing to do.

And where does this funny name actually come from?

Knipp is a kind of Grützwurst, which is related to Pinkel. It is a speciality in Bremen and in some regions of Lower Saxony.
Gumbo (Gambo) is a spicy stew thickened with dark roux (roux) in US Southern cuisine.
So: KNIPP for the northern German soul and GUMBO for the musical influences from the south of the U.S.A. Quite simple, isn't it?