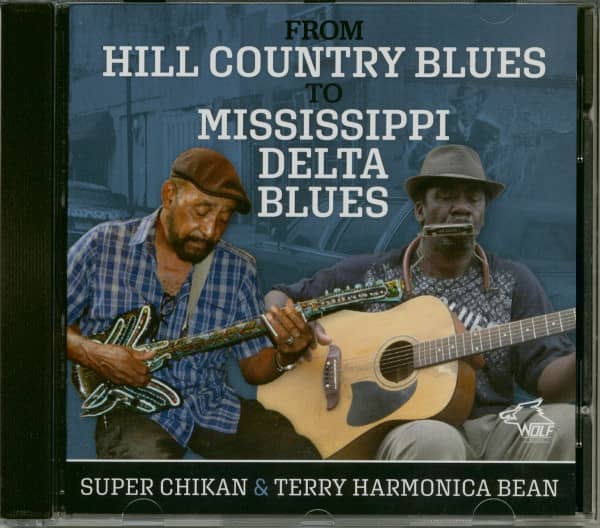 (Wolf) 15 tracks
2018 Hannes and Nicola Folterbauer went on a excursion through Mississippi to meet Harmonica Terry Bean and Super Chikan. The mood was so good, so we started a record session directly at the artists’ home to get a real feeling of their music.

James “Super Chikan” Johnson was born in the small Delta community of Darling in 1951 and grew up in rural towns around the area. As a young boy living in the country, he developed an interest in his family’s chickens and spent time trying to understand the meaning of the noises they made. His friends and family soon began calling him 'the old chicken boy' or 'Chicken' for short. He received the other half of his moniker during a stint working as a taxi driver in Clarksdale. His speedy driving earned him the new nickname 'Super Chikan.'

Bean was born in Pontotoc, Mississippi, United States, where he has remained living to date. His father, Eddie Bean, was a blues guitarist who played in an electric blues band, and encouraged his son to play both harmonica and guitar. A sharecropper, he also enlisted his twenty four children in assisting in picking cotton to earn a living. Terry Bean played for his school and in American Legion baseball, before two traffic accidents meant that his competitive career finished in his early twenties. In 1988, Bean saw Robert Lockwood, Jr. play at a music festival in Greenville, Mississippi, and this experience inspired Bean to perform regularly in and around Greensville for the next few years. Bean became more versatile, appearing as a one-man band, accompanist or band leader and he variously worked with T-Model Ford, Asie Payton and Lonnie Pitchford.