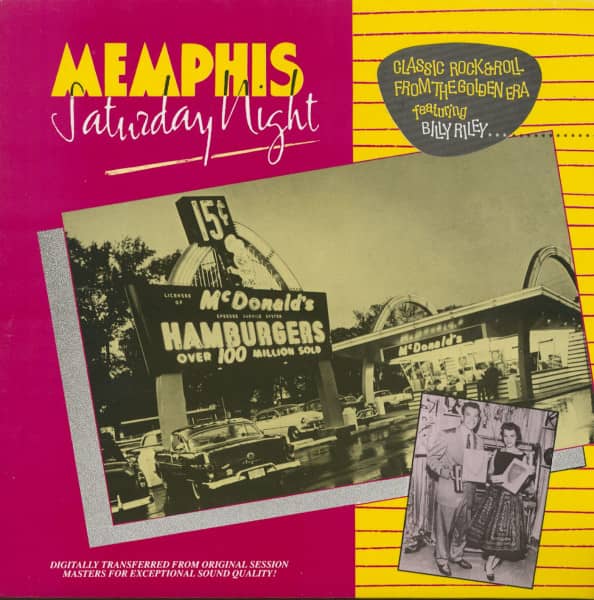 By late 1956 THE sound in Memphis was ROCK AND ROLL. It brought some strange converts into the fold - some more converted than others. This album is a fascinating little cross-section of artists coming to terms with the shaking music. We see the urbanity of Bill Justis who had previously led a soci-ety dance band - the rawness of Merle Taylor who had played tent shows with Bill Monroe at the same time Justis was playing society balls - the mannered ex, aggerations of Wink Martindale who was trying to capitalise upon his local fame as a dee-joy.
And then we have Billy Riley, Jay B. Loyd, Eddie Bond, Mack Allen Smith and Ramon Maupin who intuitively under-stood which end was up. The most revealing cut is also the worst. In 1956, Bill Justis was trying to learn rock & roll from the stance of a schooled musician who basically hated the stuff. He was hired by Dewey Phillips to arrange some sessions for O-J Records in which Dewey had a stake. 0-.1 had scored a big hit with Dave Gardner's White Silver Sands and Justis was brought in to arrange Dewey's single and a potential single by another WHBQ on-air personality, Wink Martindale. The music is an abomi-nation, Martindale evincing no understanding of rock & roll.
However, the session chatter is wonderfully re-vealing as Justis puts down Sonny Burgess for his lack of musicianship, neatly missing by a mile the point of what Burgess - and rock & roll - were all about. Later in 1956 Justis took these tapes (with the obvious excep-tion of the one we have here) to Sam Phillips at Sun and parlayed them into a job as musical arranger. By 1959 Justis had been canned by Phillips and was starting his own Play-Me label, trying to capitalise on the fast fading glory of Raunchy. Among his first solo efforts was Instant Crap which shows the good natured cynicism that Justis brought to Rock & Roll.
His tone on the sox is sour enough to curdle milk. At about the same time, Billy Riley was developing a fascination for recording pseudonymously. He had al-ready recorded as 'The Spitfires' for Top Rank, 'the Mojos' for Mojo and Sun and 'Lightnin' Leon' for Rita before he emerged as 'Willie B.' on Hermitage doing a couple of wonderful Jimmy Reed styled songs which we have included here.
The other names are more-or-less familiar. Jay B. Loyd had alreody recorded as a 15 year old wunderkind for ABC-Paramount before he was signed to Hi Records where his star shone brightly for a few weeks. Ramon Maupin kicked off another local label, Fernwood Records, in fine style with these two cuts. Eddie Bond has been a veteran of countless rockabilly anthologies - and articles that scarcely need reprising here. This unissued cut from 1957 shows Bond's hillbilly roots shining through, to better effect than some of his man-nered attempts at rockabilly.
Mack Allen Smith was a late bloomer who came to Memphis in the late '50s and cut Mean Ole Frisco down in Muscle Shoals dur-ing the early '60s. This album exemplifies the reasons that rock & roll mu-sic from Memphis still exercises such a unique fascina-tion over the music world. It was loose, sparse and informal and - as such - contrasts favourably with the layered productions that have come into vogue since its demise. Musical mistakes don't matter a hell of a lot if the feel is there - and the FEEL IS HERE!
COLIN ESCOTT