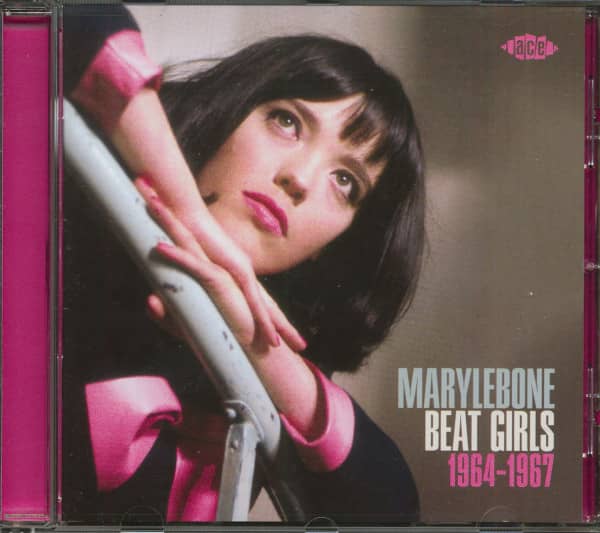 Superior 60s she-pop from UK Parlophone, Columbia and HMV – in CD and deluxe vinyl formats.
This follow-up to our recent 'Love Hit Me! Decca Beat Girls' and 'Scratch My Back! Pye Beat Girls' releases spotlights the female singers who recorded during 1964-1967 for the EMI group of labels, headquartered in Marylebone in the heart of London’s West End. As girl-pop champion Sheila Burgel writes in the package, 'Most of the female acts signed by EMI were teenagers completely tuned in to the current pop trends. Scottish duo the McKinleys, R&B club habitué Julie Driscoll, talent show winner Billie Davis and Midlands pub singer Beverley Jones took original material from London’s Tin Pan Alley and American covers and gave them a vigorous kick that made for fabulous 45s. They may not have had quite the polish of their US counterparts, but the rough’n’ready sound of the Marylebone Beat Girl was precisely her appeal.'
Among the many highlights are ‘Dancing Yet’, a Dobie Gray-style discotheque number by Liza & the Jet Set, ‘Like The Big Man Said’ by Toni Daly, a cover of Italian star Caterina Caselli’s ‘L’uomo D’oro’ with edgy English lyrics by Peter Callander, Helen Shapiro’s latter-day collectable ‘Stop And You Will Become Aware’, ‘Love Is A Word’ by national treasure Alma Cogan, written and produced by Andrew Loog Oldham, no less, and Billie Davis’ groovy gender-switched update of Chuck Willis’ R&B nugget ‘Whatcha’ Gonna Do’.
The collection is available in 12-track LP and 25-track CD formats. Julie Driscoll graces the cover of the LP edition, which is pressed on 180g mandarin coloured vinyl in a heavy duty sleeve, with a 3000-word track commentary and an array of rare photos and memorabilia on the inner bag. The CD version, featuring Billie Davis on the cover, comes with a bumper 28-page booklet featuring a 7000-word note and additional photos.
MICK PATRICK