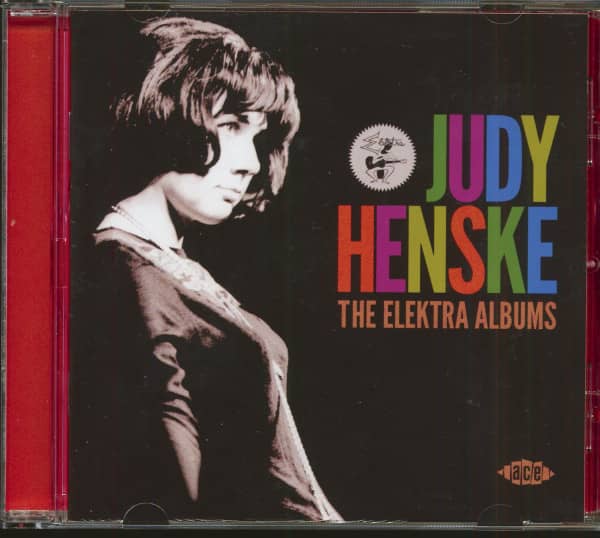 (2017/Ace) 24 Tracks - Stereo - 20-page booklet! The big-voiced Ms Henske’s two albums for Elektra »Judy Henske« (EKS 7231) from 1963 and »High Flying Bird« (EKS 7241) from the following year, released together on one CD. She had to be loud as she learned her trade warming up audiences, un-amplified, for Lenny Bruce in Sunset Strip coffee houses – her beat-keeping stamp occasionally destroying the stage. Eschewing »little girl« folk songs for the lure of whorehouse blues and murder ballads, Henske’s renditions are totally her own while her charismatic spoken introductions are a perfect foil for the gutsy vocals which follow. She runs the entire gamut of emotions; often very funny but also tender, raunchy, yearning and sensual. This reissue captures a time when Judy Henske was a force of untamed nature in the safe folk world, maybe too big for the era then unfolding outside. Sleeve notes are by Kris Needs, based on a brand new interview with the now 80 year-old Judy!

Whorehouse blues belted out with the elemental power of Bessie Smith and murder ballads introduced with patter honed while warming up hard-bitten crowds waiting for Lenny Bruce.
The sedate Los Angeles folk music scene never really recovered from the huge impact made by Judy Henske when she hit Sunset Strip in 1960. Discovered and managed by LA hustler Herb Cohen, Judy took on the tough gig of supporting cutting-edge comic Lenny Bruce at the Unicorn coffee house in West Hollywood. Armed only with a banjo, she stomped her foot so hard to keep time that she created a hole in the stage, while belting out blues and grisly murder ballads linked with hilarious repartee. The crowd was rough, and Bruce was always at the centre of controversy for tackling taboo subjects, but Judy won them over.
Signed by Jac Holzman to Elektra Records in 1962, Judy soon blended in with Fred Neil, Phil Ochs, Tim Buckley and others from the company’s burgeoning stable. For “Judy Henske”, her first album, Holzman conceived a live recording in front of a studio audience, with Judy supported by an orchestra directed by veteran bandleader Onzy Matthews. The album features stunning renditions of the traditional ‘Low Down Alligator, Bessie Smith’s ‘Empty Bed Blues’ and an eerie reading of the spiritual ‘Wade In The Water’.
“High Flying Bird”, Judy’s second LP, was informed by her immersion in the Greenwich Village scene inNew York. Captured with a stripped-down band, featuring Little Richard’s drummer Earl Palmer, Judy laid down the foundations of folk rock with the Billy Edd Wheeler-penned title track, the spectral ‘Buckeye Jim’, an impassioned version of the 1930s number ‘Till The Real Thing Comes Along’ and ‘Oh, You Engineer’, co-written by Judy with polymath Shel Silverstein.
Judy’s take-no-prisoners approach to blues and folk was influential on artists such as Grace Slick, Mama Cass Elliot,Cherand even Amy Winehouse, although her recordings never sold in vast quantities. Kris Needs’ extensive notes for this very welcome and lavishly illustrated reissue of her Elektra albums are based on a new and anecdote-filled interview with the now blind but still indomitable Judy.
IAN JOHNSTON