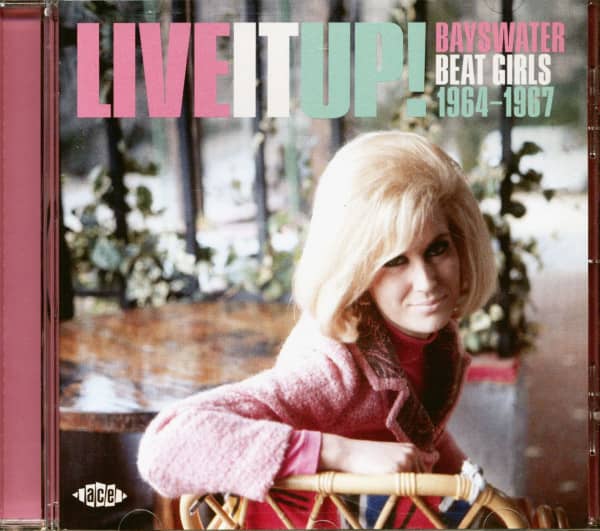 Handpicked 60's She-Pop by UK Philips, Fontana and Mercury, including many new tracks on CD.

Since Brit Girls has developed into a recognized collection area and compilations have been released since the 90s, the young women who recorded for Decca, EMI and Pye in the 60s are well represented, the Philips ladies less. With "Live It Up! Bayswater Beat Girls 1964-1967", Ace restores balance by focusing on neglected female pop jewels originating from Stanhope House in Stanhope Place, Bayswater, London W2: the address of the British branch of Philips Records and associated labels Fontana and Mercury.

As far as female talent is concerned.... well, Philips had a head start with Dusty Springfield, undeniably the de facto HRH of the Philips girls who over the years have transformed the company from 50's Lana Sister to 60's Mod Queen, over popular singers Springfield. Once Dusty became an integral part of the charts, Philips, like all other companies of the time, willingly joined the Beat Girl train and engaged other local female talents who were hungry to discover the next Cilla, Sandie, Lulu or Marianne.

And they came from near and far. Geographically, the collection distributed the talent roughly equally among girls from London and the southeast and young girls from the Midlands and the north: And to vary the mix even further, there are inclusions of displaced American, Jamaican, South African and Irish girls. Philips wonderfully united regional diversity when Dusty, Kiki Dee, Madeline Bell and Lesley Duncan pooled their resources to develop a vocal background mix that regularly improves each other's records.

Philips' recording studios (like Pye's, just around the corner) were at the heart of the London scene. For the smoke-based songbirds presented here - like Angelina, Marilyn Powell, Ayshea and Clare Torry - it was just a taxi hop to the basement of Stanhope House. Situated just around the corner from Marble Arch, it was a 20-minute walk from Dusty's apartment in Westbourne Terrace. For others, the trip to Stanhope Place was a more distant and awe-inspiring perspective. Imagine 16-year-old Kiki Dee, who auditions with her father on the A1 from Bradford and worked at Boots the Chemist a week earlier. Not just a newcomer in a recording studio, but suddenly into the burgeoning London of the Carnaby Street era with its nervous, permissive atmosphere.

The rest of the girls presented here range from hopeful beginners to experienced artists and include beat, soul and out-and-out pop. The selection focuses on the mid-60s, when many of Philips' former hitmakers kept pace with the changing times and were involved with contemporary rock and pop material. There's also a good portion of local songwriting talent here. While compositions from American sources are included, about two-thirds of the selection are written by British composers, including some written by the singers themselves.